Shutdowns aren't as simple as they used to be. 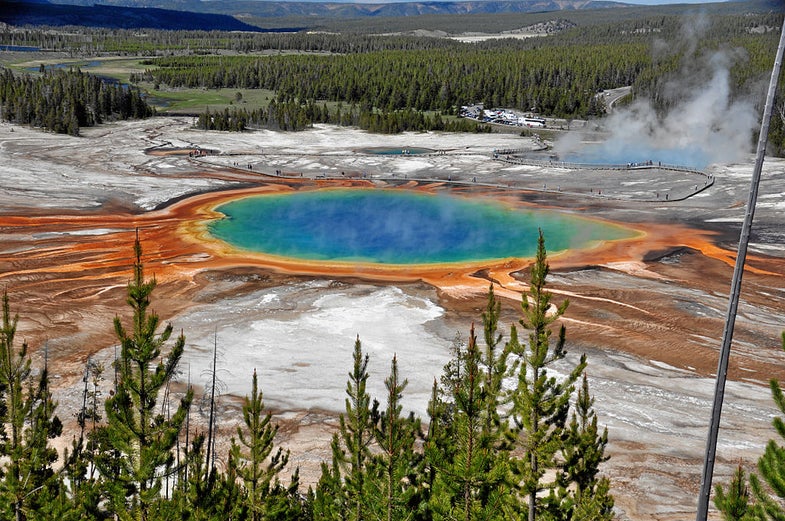 During a government shutdown—when Congress fails to pass a budget that keeps large parts of the government running—rangers everywhere chain the gates of their national parks. The usually welcoming visitor centers shutter their doors. Campgrounds go unpatrolled. Bathrooms go uncleaned.

There have been 12 such shutdowns since 1981, and there’s been little ambiguity about these strict closures. But the early 2018 shutdown brought a new dose of uncertainty to a once straightforward process. Just before the January furlough, the Trump administration announced that from now on national park sites—a total of 417 parks, monuments, battlefields, and so on—should now try and stay open during a shutdown, especially those in the “open air” (as opposed to museums).

The top of every national park website said it best: “For your planning purposes, some parks in the National Park System may have areas that remain accessible to visitors; however access may change without notice, and some parks are closed completely.”

That particular shutdown lifted after just a few days, but Congress’s short-lived budget fix is set to expire on today. In all likelihood, they’ll extend another budget fix through March. But should this climate of will-there-or-won’t-there-be-shutdowns continue, here’s how you should navigate an ambiguous and inconsistent system of park closures. You can take it from me—I’m a former park ranger.

How do you know if a park is open, “kind of open,” or just plain closed?

If a park is closed or irregularly staffed, no one is around to pick up the phone and answer your questions. But that doesn’t really matter; national parks, like you, are new to this ambiguous system, so rangers haven’t really figured out how to best relay the information they’ve got. But some simple online sleuthing can usually help potential visitors figure out what’s going on.

First, go to the park website. Every homepage will have an alert or disclaimer at the top, with a message about the closure and a link to the Department of Interior homepage for more information. This link, however, is mostly unhelpful; it gives no information about the specific park you’re seeking. In some circumstances, though, a park will give precise information about what areas are open, right there on its homepage. For instance, the Golden Gate National Recreation Area in California clearly stated that Muir Woods National Monument, a famous grove of ancient redwood trees therein, would be closed from January 21 onward (until the shutdown ended). It also listed the specific restrooms that would be closed in the greater recreation area.

If a park fails to provide this information on their website, check their social media accounts. National parks are typically active on both Twitter and Facebook, though this work has to cease when a shutdown begins. If you’re lucky, their last post will provide some clarity.

If I enter a park during a shutdown, will I see any rangers?

During the shutdown, the park service will provide absolutely no visitor services such as staffed visitor centers. But you may still see some park rangers around.

Most rangers will be furloughed, meaning they’re told to stay home because there’s no funding to pay them. These are the folks who work in visitor centers, lead hikes, give campfire talks, and collect entrance fees. But that doesn’t mean a park will literally be empty. Of the park service’s 24,681 employees, 13 percent (3,298) are deemed “essential,” which means they stay on even when everyone else stays home. The majority of them are law enforcement rangers.

Law enforcement rangers dress in the same uniform as their non-essential peers, but are distinguishable by the fact that they carry weapons. The federal government deems these rangers as “essential” government employees necessary for the “protection of life, property, and public health and safety.” They’re there to respond to injuries, car accidents, or even to intervene if they see people try to approach large wild animals. But because parks are big and law enforcement rangers are relatively few, there’s a good chance you won’t run into any.

Private businesses that operate within a park—like hotels, restaurants, and kayak rental shops—can remain open during a shutdown, so you’ll see those employees around.

Will park resources be less protected because there aren’t as many rangers around?

On Sunday, January 21, The Washington Post reported that a snowmobile tour guide in Yellowstone National Park—who had a permit from the park to conduct tours—let two clients enter a closed area near the legendary Old Faithful Geyser and proceed to zip around. Fortunately, no natural resources were damaged. Their illegal actions weren’t spotted by any rangers out in the field, but some park staffers happened to catch them on a webcam. This disregard for well-known rules likely wouldn’t have occurred had the park been staffed at normal levels.

Without adequate staffing, protected park resources everywhere become more vulnerable to theft, vandalism, or harassment. For instance, it’s common in Hawaiian parks for rangers to ask visitors not to take lava rocks home as souvenirs. And in parks with large animals, like bison, rangers require visitors to stay at appropriate distances from the unpredictable creatures. Guests are infamous for getting too close to dangerous animals in the hopes of snapping pictures, and for scooping up valuable geologic relics to take home. You may intend to behave yourself in an empty park, but others won’t be so thoughtful.

Yes, this is quite possible.

Park rangers (even those not designated as “essential” employees by the government) play a critical role in park safety. For instance, a massive swathe of cliff recently slumped into the ocean right next to a popular trail at Point Reyes National Seashore (a park about 50 miles north of San Francisco). A visitor relayed these precarious conditions to rangers working at a visitor center. This allowed the rangers to not only directly advise future visitors of the danger, but to also prominently post news of the precarious circumstances on the park’s homepage.

If this occurred during a shutdown, it’s quite possible the message wouldn’t have been relayed at all, leaving unassuming hikers to visit an area susceptible to collapse.

What do park rangers do during a shutdown?

For those majority of rangers deemed unessential the only option is to wait it out. These furloughed employees can’t really travel anywhere, because the shutdown can end at any time.

Many rangers feel this impedes their mission to protect the park and promote its significance and meaning to visitors. Park rangers don’t get into the business for riches, but because they care about the resource, whether it’s Gettysburg National Historic Battlefield or the giants of Redwood National Park. Above all, a park ranger’s job is to encourage you to care about the cultural significance of place and the unique life that inhabits it.

And those are just the members of the park staff you’d usually see. Plenty of others work as biologists, ecologists, and resource monitors, collecting data about vulnerable critters, combating invasive species, and studying how best to balance the need to preserve an ecosystem while still affording us access to explore it. These behind-the-scenes park employees are benched during a shutdown, too. Their work might not be labeled as “essential” by the government, but without them, parks fail in their prescribed duty to responsibly manage lands for present and future generations.