The Greater Sage-Grouse Is Bouncing Back

Thanks to its growing numbers, the government voted not to list it as endangered. But not everyone is happy with that. 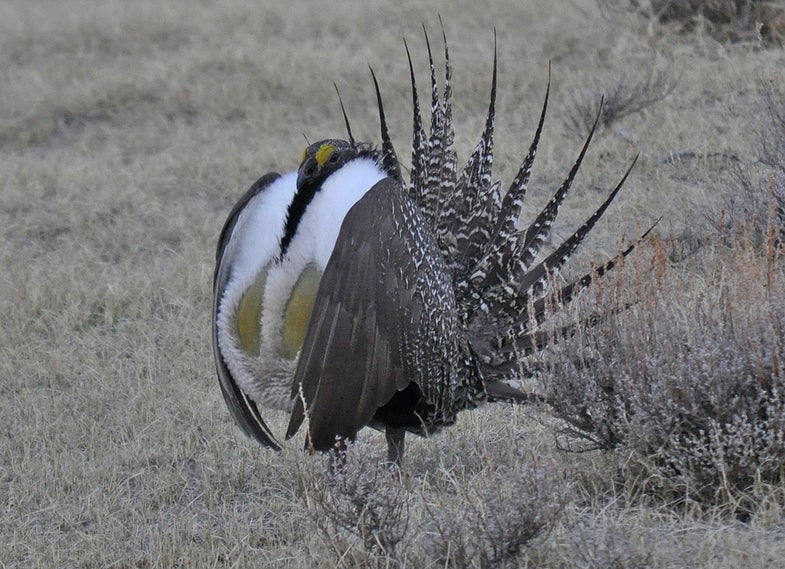 On Tuesday, the U.S. Department of the Interior decided not to give the greater sage-grouse protection under the Endangered Species Act as a result of “unprecedented landscape-scale conservation effort.”

Sage-grouse used to number in the millions, but in recent years, their population dropped to as few as 100,000 birds. That’s why the Fish and Wildlife Service first considered them for ESA protection in 2010.

Since then, FWS reports that conservation efforts–which Think Progress notes included cutting down on fires, invasive grasses, and habitat fragmentation–have reduced the risk to the species by as much as 90 percent. Although their numbers aren’t nearly as high as the 16 million-strong population of about 100 years ago, the 2015 estimate of 424,645 is an improvement.

The U.S. Secretary of the Interior said in a statement that, “This is truly a historic effort–one that represents extraordinary collaboration across the American West. It demonstrates that the Endangered Species Act [ESA] is an effective and flexible tool and a critical catalyst for conservation.”

The U.S. Fish and Wildlife Service determines which species are classified as Endangered or Threatened under the Endangered Species Act based on these factors:

There was some concern, as the Washington Post wrote, that the listing of the sage-grouse and the subsequent protection under the ESA would be harmful to development in the region, comparing it to the listing of the northern spotted owl, which effectively shut down logging operations in its Pacific Northwest habitat. Since the grouse’s range is much larger (it’s distributed across 173 million acres in 11 states in the West), it could have an even larger impact on local industries.

Though oil companies and local governments were strongly opposed to listing the sage-grouse as endangered, the decision not to was a reportedly biological one, not political. In August, the Western Association of Fish and Wildlife Agencies released a report that notes “Scientists make population estimates based on the number of male birds counted on traditional mating areas, or leks. The number of males counted on leks has increased 63% since 2013.” The FWS claims that “despite long-term population declines, sage-grouse remain relatively abundant.”

But despite the government’s rosy view on it, not all groups are sure this ruling is a good one. WildEarth Guardians, for example, was reportedly pushing for the sage-grouse’s listing.

Beyond having a particularly impressive mating dance, the sage-grouse is an important species for the sagebrush ecosystem. As Audubon reports, it’s an indicator species, which means the health of the sage-grouse can signal problems or successes in the overall ecosystem.