Lampreys were thought of as models of early vertebrate evolution, but new evidence suggests otherwise. 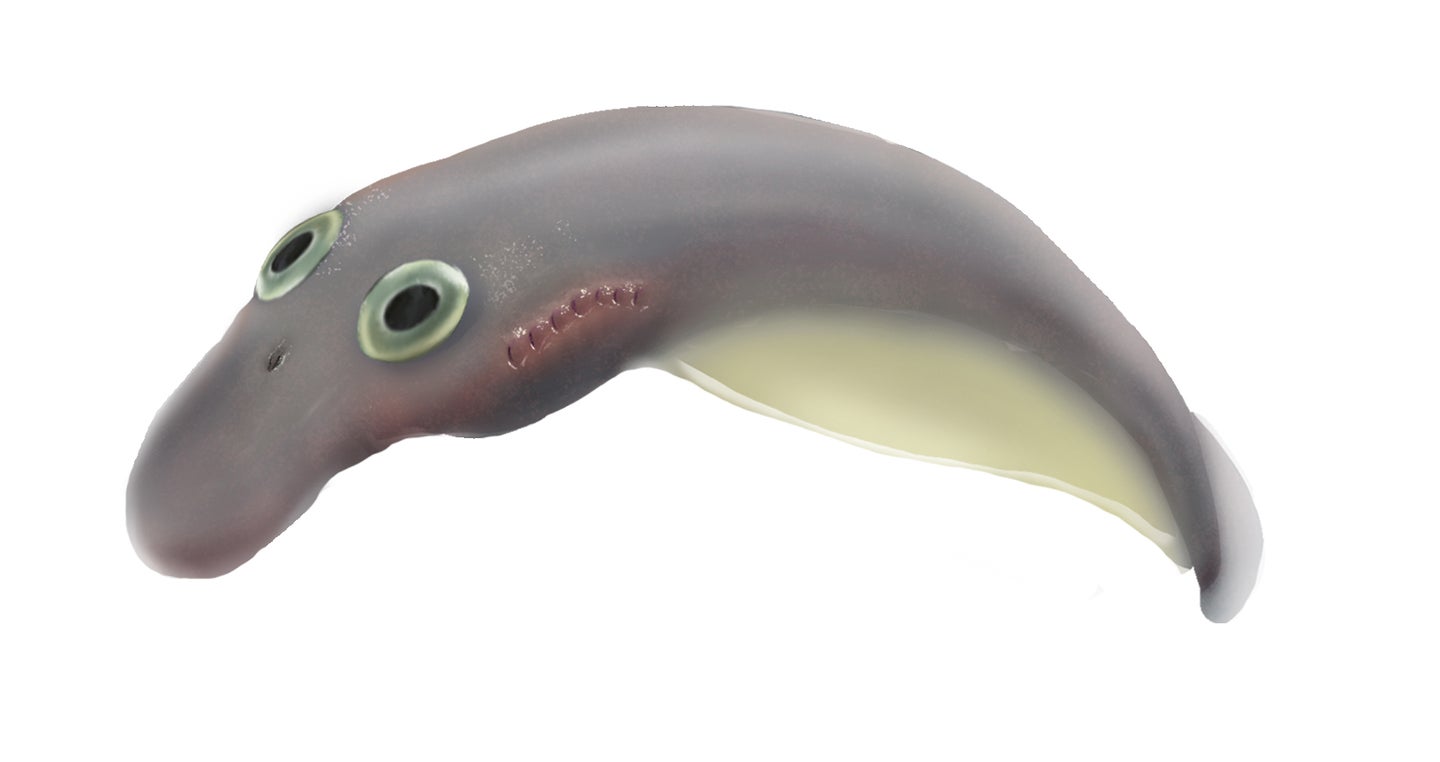 An illustration of the hatchling lamprey found in South Africa. Kristen Tietjen
SHARE

You’re not descended from a water vampire. It’s probably not a possibility you’d considered until now, but for more than a hundred years, evolutionary biologists suspected that the lamprey, a jawless, eel-shaped, blood-sucking fish, was the closest living model of the very first vertebrates.

Despite how that sounds, it’s not an unreasonable suspicion. The lamprey is one of a handful of animals that exist on the boundary between vertebrates and our invertebrate forebears. Adult lampreys have a spinal column and swim through the water in search of fish, which they latch onto and bleed out with a tooth-filled mouth. But “the early phase of their life is entirely different and preposterous,” says Tetsuto Miyashita, a vertebrate paleontologist at the Canadian Museum of Nature.

Larval lampreys live like sea anemones, spending the first two to seven years of their lives buried in streambeds, filtering food out of the water with toothless, muscular throats. Because of that close resemblance to invertebrates, lampreys have long been treated as a model for the earliest vertebrates–not exactly our ancestors, but dopplegangers.

“Here’s a primordial-looking animal that transformed from this supposedly primitive state,” Miyashita explains. “It seemed like an analogue for what must have happened in an early stage of evolution. It’s a very convenient story.”

But research on new fossils of Paleozoic lamprey larvae, published Wednesday in the journal Nature, have turned that story upside down. “It was very clear to me, like that morning icicle hanging off my roof right there, that we turned over a 150 year old evolutionary theory,” says Miyashita, who was a lead author on the research.

Biologists had called the lamprey-as-ancestor theory into question before, but the problem rested on the sparse fossil record of lampreys. To disprove the theory, scientists would need to show that the lamprey started out fully like a fish, then later evolved their sedentary larval form.

This new research therefore hinges on a series of remarkable fossils: hatchling lampreys, including one young enough that it was still carrying its egg’s yolk. “The moment I took a look at it, it was clear that it was a hatchling, with a yolk sac,” Miyashita says. But it was nothing like the bottom-feeding larvae of modern lampreys. “It already had big eyes, and an oral sucker with teeth. It was almost like a miniature adult.”

Miyashita, who’s fond of baseball analogies, says finding the fossilized hatchling was like “going to the ballpark and catching a ball hit by a player who’s never hit a homerun in 25 years.” The smallest fossil could fit on a pinky nail, and has no bones or teeth—it’s just soft tissue imprinted in the bottom of a muddy lagoon.

The researchers collected more fossils from the site, showing the species as it matured into a full-sized lamprey, as well as other juvenile specimens from the same time period across the world. “This is a pattern that holds across time and space,” Miyashita says, not just evidence of one strange baby lamprey.

That means that the larval phase isn’t a holdover from the deep past, but “a completely new evolutionary innovation,” he says.

Margaret Docker, an expert on lamprey biology and genetics at the University of Manitoba, calls the findings “very exciting.” She agrees that the fossils “rule out modern lampreys as a model for the earliest vertebrates.”

Docker had previously proposed another model of lamprey evolution that involves an ancestor with some traits of both larva and adult. Right now, she says, it’s too early to know if these fossils are evidence for or against that theory. Still, she agrees with the overall takeaway: “where we run into trouble is when we treat modern lampreys as ‘living fossils,’ assuming that they have remained unchanged over the past 400 to 500 million years.”

But the findings raise two new questions: why did the lamprey evolve into such a confusing creature, and what did the earliest vertebrates actually look like?

The first answer seems to have to do with the habitats of modern lampreys. All the ancient, fishy lamprey larvae were found in saltwater environments, Miyashita says, from brackish lakes to lagoons to offshore river deltas. And those are some of the most biologically productive ecosystems on Earth—think of the massive shrimp industries in the deltas of the Mississippi or Mekong rivers.

“That’s in stark contrast to modern lampreys,” Miyashita says, most of which live in freshwater rivers and lakes. “And all species start their life cycles in a stream.”

Those streambeds are barren compared to coastal wetlands. “Having a larval form gives you two bites at the cherry of life’s resources,” says Michael Coates, the paper’s senior author, and a vertebrate paleontologist at the University of Chicago. “It means that you’ve got great separation between juveniles and adults. In a sense, they’re inhabiting different ecosystems.” When food becomes scarce for one life stage, it doesn’t wipe out the whole population.

It’s not clear why lampreys would have left the rich coastal water in the first place. Miyashita and Coates both point out that lampreys have survived four of Earth’s five major extinction events, and speculate that their hybrid life cycle may have been part of that resilience.

Coates also notes that there are a number of “relic” species of fish that have held on only in rivers and streams, mostly in North America. Bowfin, alligator gar, and sturgeon are all the last living examples of once-massive families of fish, which have been pushed from the open ocean and found a refuge inland. It’s possible that lampreys are part of that pattern.

As for the earliest vertebrates, Mayashita and his co-authors argue that another group of fish, characterized by bony armor in their skin, are closer to the mark. Like lampreys, they have no jaws, and appear to have given rise to other boneless vertebrates. “Bone, we suspect, runs deep,” says Coates. In other words, it’s not that lampreys, sharks, and other animals are primitive for their lack of bones—it’s that they gave them up at some point.

If the “primitive” features of lampreys are actually specialized adaptations, it also has important ramifications for other research that treats lampreys as a baseline. Of particular interest is the fact that lampreys can regrow their spinal cord, a trait which could be life changing if humans came from the same root.

“From the genome, to medical engineering, to evolutionary biology, there’s this idea that you can look at lampreys as a convenient model of the primitive vertebrate,” Mayashita says. “Now we have to stop and think about it.”