Junk food has a new meaning 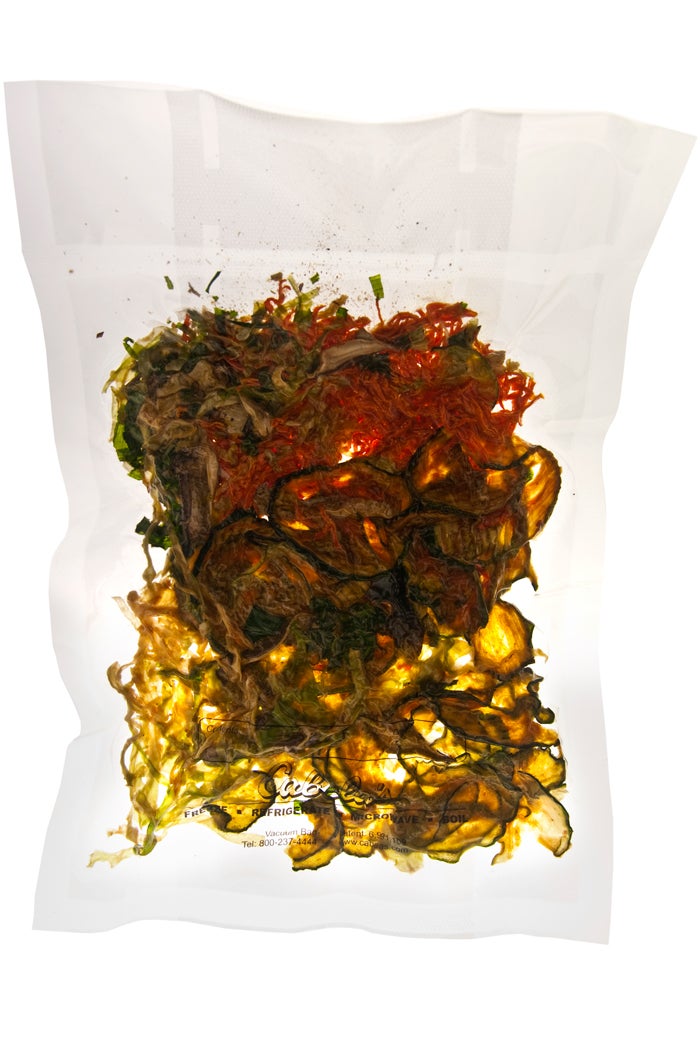 On a shady street in Staten Island, New York, a man is preparing for the apocalypse. Sort of. Tattfoo Tan is an artist seeking to reclaim skills lost in the inexorable drive towards new technology, teaching people to be ready for the next Hurricane Sandy.

This winter, I visited his white-painted, high-ceilinged studio. He led me past a gallery of folded and draped tents to his kitchen. He opened his freezer to show me dozens of freezer bags stuffed with raspberries, one of the few crops that will grow in his shady garden. He then handed me nettle, oatmeal, and raspberry leaf tea he had hand dried and blended before we settled in to talk about all he had learned— the “things your grandparents should have taught you—but didn’t,” he said.

One of his projects, a shelf-stable, military-style ration, he made from refuse. Tan was looking for a way to make use of food waste. He calls the leathery strips New Earth Meals Ready to Eat (NEMREs).

Tan asked supermarkets for produce grocers would ordinarily throw away because they were blemished or weirdly shaped but still fresh. He brought home five-gallon buckets stuffed with apples, carrots, and potatoes. He used an enormous dehydrator to suck all the water out of the produce to prevent spoiling. Apparently, the plastic counter-top dehydrators you might find at a home store don’t cut it. “It takes 12-16 hours to dehydrate something and while you are, the other food you’ve collected is rotting,” he told me. “It’s really stressful.”

Tan added flavor to his apple leather, soups and mashed potato dishes by adding spices like curry, ginger, or sage. He then vacuum sealed the crunchy remains in plastic pouches. In the end, Tan had MREs just like soldiers in war carry.

He has also experimented with another survival food: pemmican, which is a greasy ball of meat and fat that Antarctic explorers like Ernest Shackleton brought on the ice. Tattfoo dehydrated 5 pounds of meat, grinding it to a powder and forming a paste with fat. The final block of dried meat fits into an Altoid tin.

The NEMREs and pemmican are currently on display as part of the Value of Food exhibit at the Cathedral of St. John the Divine. They’re part of Tan’s obsession with survival arts from blacksmithing to archery to herbalism and his ambition to teach these skills to young people to prepare them for adulthood. As part of that ambition he teaches classes in knife skills so children will be able prepare their own meals.

“A lot of people say technology, more gadgets, will save us,” he says. Instead, Tan says we need to take a look backward in order to be able to choose the best path forward.

“What are you going to do, call me when things go bad? No. Be able to make your own.”