What had 10 legs and the eye of the tiger? 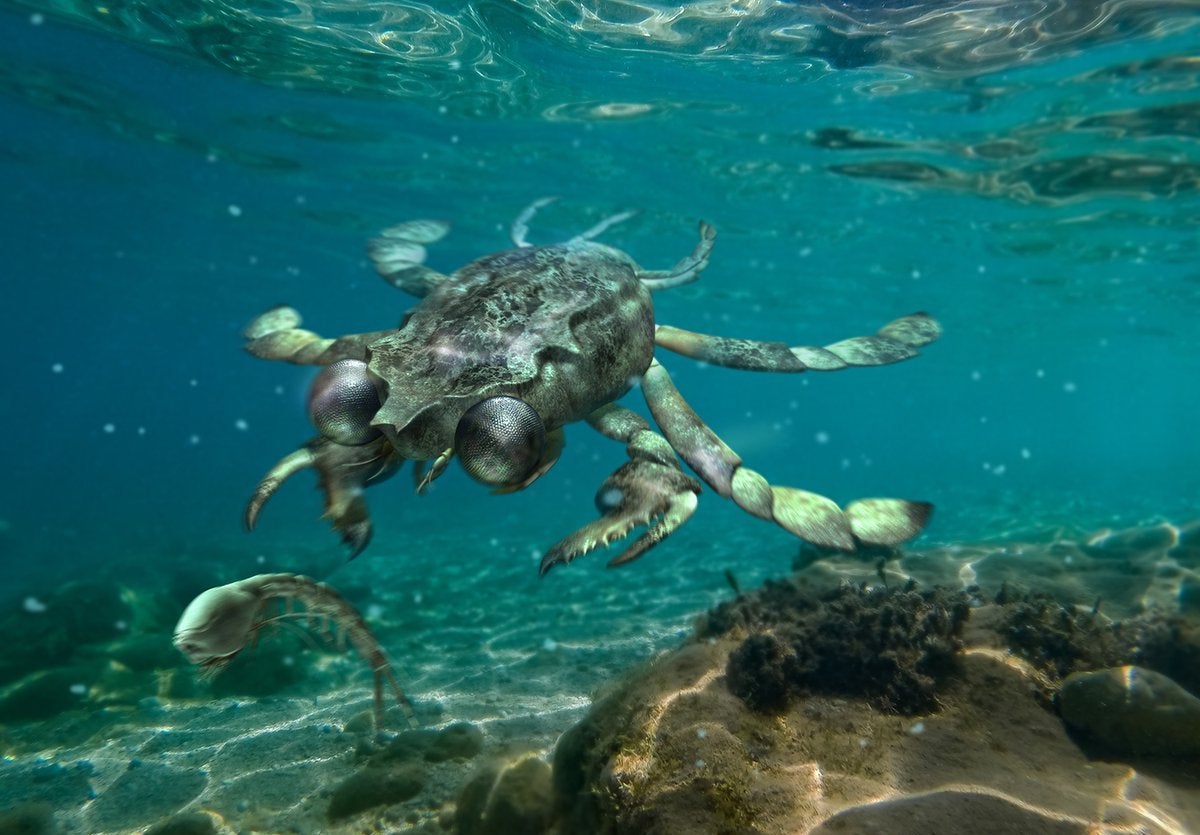 Dragonflies are some of the most efficient predators alive today. They can track a single individual in a swarm of insects. As they close in on their target, they can calculate its flight path to intercept it in midair.

A scattering of fossilized 90-million-year-old crabs shows how an animal might turn from bottom feeder to dragonfly-like predator. Callichimaera perplexa, first identified from fossils in Colombia in 2019, lived in the warm oceans of the mid-Cretaceous. And they had truly enormous eyes: An entire adult crab was about the size of a quarter, and the eyes set in its head took up about 16 percent of that. A human with a proportionate anatomy would have dinner plate-sized peepers.

Seven of the crabs are so well preserved that in a recent paper published in the journal iScience, a team of paleontologists could examine the facets of their compound eyes, and even the shape of the nerves between eyes and brains. That tissue suggested that the C. perplexa, or chimaera crab, saw almost as sharply as a dragonfly, and more sharply than a mantis shrimp, which hunts snails and crabs.

The eyes alone aren’t a dead giveaway for a skilled hunter, though. Bees have sharp vision too, which they use to hone in on flowers. (Still, the nectar eaters are the descendants of predatory wasps.) It’s the combination of crystal-clear sight and a fast-swimming body that suggest that C. perplexa was a predator. Tucked behind the crab’s claws are a pair of wide, flat arms that almost resemble oars. That means that the chimaera crab was probably zooming through the water, chasing after whatever its eyes locked onto.

“I think the closest analogy would be a blue crab today,” says Kelsey Jenkins, the lead author on the new study and a graduate student in paleontology at Yale University. The glossy species, which ranges from the mid-Atlantic into the Gulf of Mexico, can flap through the water with a pair of flattened swim legs. “But we don’t have any crabs that are swimming as well as this thing probably was,” Jenkins adds. “It’s almost like a lost lifestyle.”

Javier Luque, the study’s senior author, and a paleontologist with Harvard University, first discovered the stunningly well-preserved fossils as an undergraduate in 2005. “It was baffling, because that thing didn’t look anything like what we knew at the time,” he says. “After a decade of research, if we compare it with mammals, this is not a monkey or a rodent or a canine. This is the platypus of the crab world, because it’s so weird and different.”

C. perplexa is still so new that the researchers don’t yet know what the crab ate, or all of the animals that it shared the ocean with. But the swarm of fossils was surrounded by an even bigger school of comma shrimp, a lentil-sized crustacean that might have been dinner.

How the crabs became hunters is also a mystery that hints at a strange evolutionary path. Many of the species’ most striking features—its paddle-like legs and bulging, stalk-less eyes—are those of a typical crab larva. “Larval crabs have all these swimmy features, and they’re just floating in the water column like plankton,” says Jenkins. “It’s not until they become adults that they take on more adult features,” like a wide body and walking legs. By contrast, she says, “This crab just looks like a giant baby.”

So in one way, the chimaera crab comes out of nowhere—there are no close relatives like it in the fossil record. In another, it might have been using tools its ancestors had to live an entirely new life.

There are advantages to being a crab. For still-unknown reasons, completely unrelated collections of species have evolved to look “crabby” over and over again. (The process is called “carcinization.”)

“There’s sort of a debate over what makes a crab,” says Jenkins. The word is used to describe both an evolutionary group, like “mammals,” and unrelated organisms that share a basic shape, like “trees.” “[C. perplexa] is a true crab in the sense that it belongs to this group that evolved during a certain time. It gives us insight into what it means to be a crab.”

Luque points out that although many animals have stumbled upon the “crab” body shape, there are even more examples of crabs evolving into another shape—as C. perplexa demonstrates. It could be that crabbiness is also a platform for adapting to new ecosystems. “You don’t see lobsters climbing trees, and you don’t see shrimp living on beaches,” Luque says. “Crabs have done that all, and more.”

So while a crabby lifestyle might come with benefits, this fossil creature demonstrates that it’s not always the best option. Sometimes it’s better to be a baby crab.