The Next Leather Jacket Will Be Made From Mushrooms 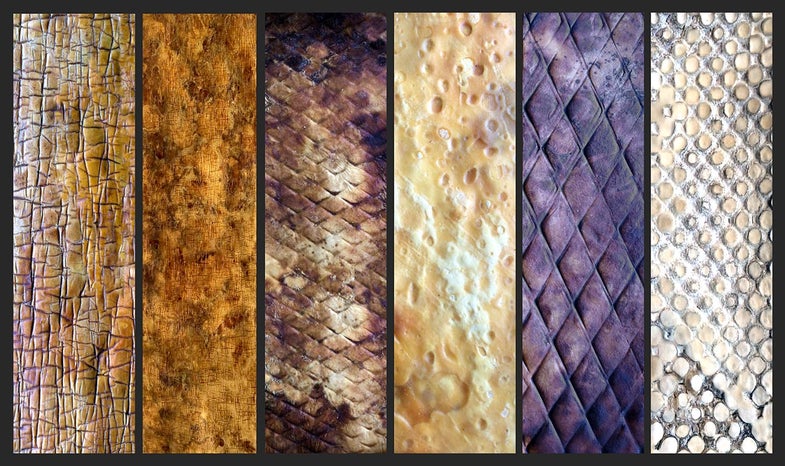 For years, I have been writing about biotech’s attempts to take cattle farming out of leather production and replace it with a more sustainable biotech alternative. From an environmental perspective, cows are costly to feed and raise, tanning their hides is toxic, and of course many see their slaughter as cruel. Yet as consumers we’re addicted to the luxurious feel and durability of our leather. Just think of the visceral response we have to the scent of the leather interior of new car.

To tackle this problem, companies like Modern Meadow have attempted to grow leather directly from skin cells. Others have sought replacements with synthetics. And then there’s artist Phil Ross.

Phil Ross, artist and founder of Mycoworks, is growing leather from mycelium, the dense root structure of mushrooms. “It’s actually the skin of the mushroom,” Ross says.

By growing mycelia under varying conditions including, temperature and humidity, and then tanning the resulting fungal mat, Ross and his team are able to make leather that looks and feels like cow, snake, and ostrich skins. He says his leather requires less energy, has a smaller environmental footprint than cow leather, and is biodegradable.

Simultaneously, the mushroom tissue can be manipulated as it’s growing. That means that while incubating, designers can add hardware like zippers and hooks right into the hide, adhere parts instead of stitching them together, or even change the texture of the material.

“It has a plasticity that you can’t have with animal hide,” Ross says. Though Ross is still refining his leather to match the durability of cowhide, he recently showcased Mycoworks’ first wallet.

Mycoworks is a model of how an art practice can spur an entire industry. “This is part of the survival strategy of many artists at this point,“ he says. “Right now, this work is more greatly valued in the business world than the art world.“

Ross has been creating mycelia artworks for nearly 30 years. He first became interested in reichi mushrooms for their medicinal properties, but he quickly learned that by feeding mushrooms sawdust and other waste materials he could grow solid sculptures, bricks, and even furniture.

Companies like Ecovative use similar techniques to grow packing material and even paneling from mycelia. DIYbio spaces like Genspace (which I cofounded) run classes on making mushroom molds. Students in the Biodesign Challenge have made kits from them. Now Ross has pushed the practice into fashion.

During Mycoworks’ investor demonstration at the Indie Bio accelerator in San Francisco in July, chief executive officer Sophia Wang pulled out an unwieldy six-foot hide of leather onstage. The hide was so thick she could barely hold it over her head.

The Mycoworks team is unlikely group to start a company—Ross is an artist, Wang is a PhD in English Literature from University of California, Berkeley, and their recently hired communications consultant Joanna Steinhardt, is a Berkeley PhD in anthropology. Ross sees their backgrounds as an advantage.