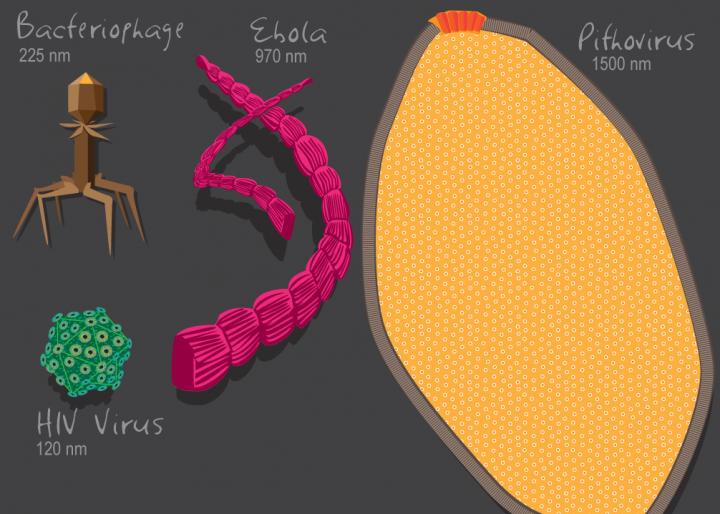 Influenza, SARS, Ebola, HIV, the common cold. All of us are quite familiar with these names. They are viruses—a little bit of genetic material (DNA or RNA) encapsulated in a protein coat. But what we don’t really understand, and what scientists have struggled with since the study of virology began, is whether viruses are actually living or not. A paper published today in Science Advances just might change that. By creating a reliable method of studying viruses’ long evolutionary history—hitherto nearly impossible—researchers have found new evidence that strongly suggests viruses are indeed living entities.

Scientists have long argued that viruses are nonliving, that they are bits of DNA and RNA shed from other cells. Indeed, based on everything else we know about what it takes to qualify as life, a virus doesn’t seem to fit the bill. There are many life processes, such as the ability to metabolize, that viruses do not do. Viruses seem to carry out only one life process, reproduction, but even then, individual viruses don’t carry translational machinery, namely, the proteins needed to read their DNA and RNA and build new viruses. They invade a cell and hijack its genetic tools to do it for them.

But within the last decade, developments in virology have started to reveal more and more that viruses might in fact be alive. One was the discovery of mimiviruses, giant viruses with large genomic libraries that are even bigger than some bacteria. To put this in perspective, some viruses, like the Ebola virus, have as few as seven genes. Some of these giants have genes for the proteins that are required for translation—those readers of DNA and RNA that in turn build new viruses. This throws the lack of translational machinery argument for classifying them as nonliving on its head.

Despite some of these new findings, however, one gigantic question mark in the whole discussion was what the evolutionary history of viruses looked like. So University of Illinois crop sciences and Carl R. Woese Institute for Genomic Biology professor Gustavo Caetano-Anolles, and graduate student Arshan Nasir, took on the ambitious task of trying to trace just such a history. Viruses clearly evolve—ask any medical professional—and they have tremendous diversity as well (There are less than 4,900 viruses described so far, but estimates have the total number of viral species at more than a million).

But, because the small DNA and RNA strands within a certain virus are replicated so many times within a single host, and even partially mixed with the host’s DNA during the process, mutations occur often and at a rapid pace, says Caetano-Anolles. This makes studying a virus’s genes to figure out its evolutionary history about as productive as explaining the tenets of quantum mechanics to the Cheshire Cat.

To solve this problem, Caetano-Anolles and Nasir looked instead at protein folds. These are simply, Caetano-Anolles explains, the puzzle-like shapes of proteins unique to viruses and cells that allow them to perform basic molecular functions. The specific shapes of these proteins are coded by genes, and do not change drastically over time, unlike DNA or RNA sequences, thus providing a good marker to look back in history.

And now for the numbers. Caetano-Anolles and Nasir analyzed the protein folds of 5,080 organisms—3,460 viruses and 1,620 cells from other organisms representing every branch of the tree of life. What they found was huge: 442 protein folds were shared between cells and viruses along with 66 folds that were unique to viruses. What this indicates then, is a branching of some kind.

It suggests that viruses were not simply shed genetic material of cells, but shared unique properties with cells (and thus were living) and eventually evolved as separate entities. “We are now able to build truly universal trees of life,” says Caetano-Anolles, “that describe the origin and diversification of organisms and viruses.”

These findings provide some of the strongest evidence yet that viruses are indeed living. “The mere fact of the existence of a universal biology unifying viruses and cells now justifies the construction of a Tree of Life that embraces viruses side by side with cells.” says Caetano-Anolles. The interesting thing about these results is that they indicate that viruses must have diversified from ancient cells by a process called reductive evolution, where organisms simplify instead of becoming more complex. Viruses were likely “more cellular in nature and existed in the form of primitive cells,” explains Nasir. The ancient cells that these primordial viruses resided in were those of the last universal common ancestor that preceded diversified life about 2.45 billion years ago.

At some point, the genomes of these ancient viral cells were reduced or eliminated, to the point where they lost their cellular nature and became modern viruses. Nasir says that “viruses restore their ‘cellular’ existence today when they enter and take control of any cell.” When an infected cell spits out new viruses, it is likely very much like those ancient cells making primitive viruses. “Thus,” Nasir concludes, “in the beginning, virus plus cell existed as a unit. Today, they are split but can restore their association upon viral infection of a cell.”

This study comes on the heels of recent discoveries. Greater understanding of reductive evolution has revealed numerous examples of parasitic organisms like bacteria and fungi that rely on hosts to complete their life cycles. Nasir hopes that their findings added to existing evidence will require scientists to include viruses in the picture of cellular evolution. “Excluding them will always yield an incomplete picture,” he says. That may be overly hopeful, but the researchers are undeterred. Says Caetano-Anolles, “I do hope this will facilitate a sea change in our perceptions of the virosphere.”