On the Road Documenting Bioartists and Biohackers

Meet the duo behind DIYSECT, a web series that explores the politics surrounding a growing movement 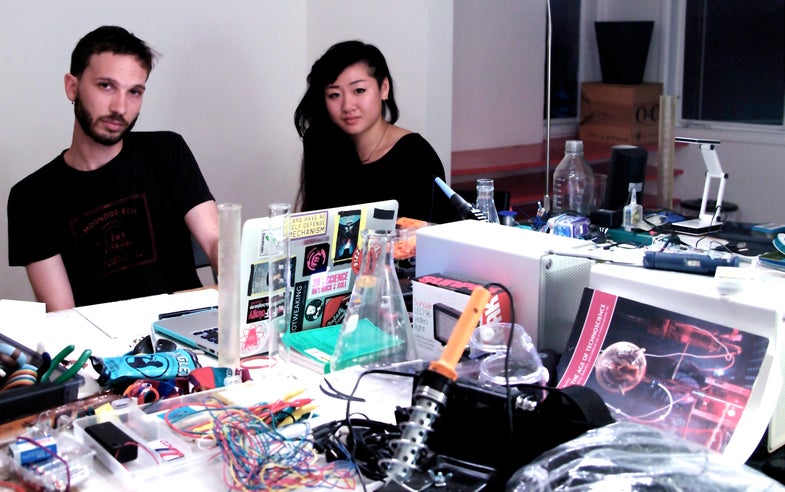 While other graduates were starting their first jobs, in the summer of 2013 Mary Tsang and Ben Welmond, having completed their degrees at Carnegie Mellon, took to the road. Their plan: to film a series about people using biotechnology in homes, hacker spaces, and art studios. The duo raised $9,000 on Kickstarter for gas and equipment, borrowed Welmond’s parents’ Honda Civic, and crisscrossed the country conducting interviews.

But what started as a three-month road trip has turned into a three-year odyssey. The two have produced five episodes in their DIYSECT series that offer thoughtful meditations on the troubling, sometimes bizarre landscape of biohackers, artists, and their relationships with commerce, law enforcement, and the rest of us.

The BDC Blog interviewed Welmond and Tsang about their experiences making the series.

Daniel Grushkin: What are the origins of DIYSECT?

Mary Tsang: The journey started in the 2003 beige Honda Civic Ben got from his parents. We lived out of that car for three months on the road. We were really naïve about the documentary when we started. We had no idea what kind of episodes to make. We were like, ‘let’s get the footage and transcribe everything, and then let’s try to figure out how to weave a narrative into the interviews.’ There were people in DIYbio, writers, curators, synthetic biologists, anthropologists, and artists. The themes emerged from the quotes.

DG: What was the most memorable encounter?

Ben Welmond: Seeing the artist Adam Zaretsky at work was one of the scariest and most bizarre experiences. I didn’t agree with everything he was doing, but I could tell that he was brilliant and that he was asking a lot of really great questions.

Zaretsky lives in a cabin next to Woodstock, New York out in the middle of the woods. He said, ‘I have performance plan for you.’ He got dressed up in this frog monster costume and he started dancing around in his backyard. Then he started tattooing this tree with ink and DNA. He had no concern about how what he was doing was going to affect living things. I told him, ‘Let’s interview you in this chair outside.’ He said, ‘No, I want to be sitting in a lake.’ It turned out to be one of the most educational interviews I’d ever done, this guy sitting barefoot in a lake talking about the potentials of biotech.

DG: You visited a number of biohacker spaces that had just opened. Did they share a common vibe?

BW: Everyone in the DIYbio spaces was very, very excited, which is great. But there was this kind of simplistic equation of biotech and computer science—how DNA and computer bits were all just code. At times, it felt like they were a marketing arm for synthetic biology trying to make the public feel comfortable with it. The artists on the other hand were a lot more critical.

MT: Everyone wanted to democratize science. But they were not unified about how. For a lot of them, it was education and doing workshops. Some people just wanted to tinker with their friends. Others believed they really needed to find another way bring the technology to market. This difference eventually led to split among the Silicon Valley labs.

DG: Mary, you’ve come away a little jaded since you started filming?

This totally redefined my definition of biohacking. It was so disruptive. I got back to the United States, and I thought, ‘What’s the culture in the US? Oh, it’s capitalism. Our culture is shopping.’ That’s when the disappointment started. It influenced how the episodes were structured. I wanted to be louder in our critique of the movement.

DG: And since then?

MT: It’s been three years. I’ve made it a habit to continue to meet people and film people. I’m already planning a second series of five episodes.

Since starting DIYSECT, Tsang has joined MIT Media Lab’s Design Fiction Group. Her work can be found here. She also helped create the BDC trailer. Welmond is now based in Los Angeles and works in film and television.