How ‘Rogue One’ resurrected the Death Star

The movie's visual effects experts explain how the most important character was created. 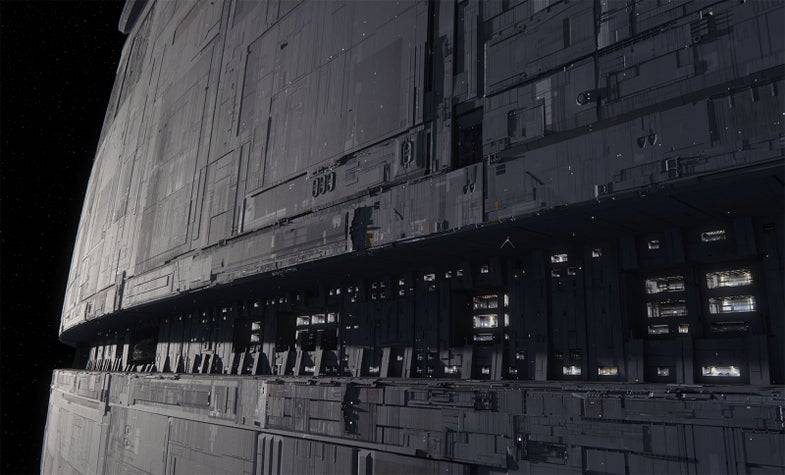 Rogue One wouldn’t exist without John Knoll. More than a decade ago, Knoll—then the visual effects supervisor on the Star Wars prequels—had a simple idea: what if the rebels, Mission Impossible-style, stole the Death Star’s blueprints?

By 2012, Knoll had been promoted to chief creative officer for Industrial Light and Magic, which has orchestrated the visual effects for each film in the franchise, and Knoll pitched the storyline as a unique deviation from the Star Wars cannon.

In Rogue One, which premieres Friday, the Death Star is as much a character as Jyn Erso or Cassian Andor. The battleship is ever present, this hulking and intimidating entity that looms over the plot, so with that much screen time devoted to the Death Star, it needed to look realistic. And therein lies the slight problem—the original Death Star model had been long lost to collectors.

Sure, ILM could have fabricated a Death Star with various computer programs, but Knoll knew that was a flawed strategy and sought to bring the Death Star to life. “When people see it on screen, it needs to look like the Death Star they know and love,” he says.

An added difficulty was the architectural complexity of this Death Star—for the first time, both the poles and the equatorial trench would be featured.

“Gareth [Edwards, the director] has placed the cameras in different spots, where we haven’t put cameras before, and that is opening up these opportunities for us to see all these new areas of the Death Star,” says Russell Paul, a digital supervisor at ILM whose team was heavily involved in the creation of the galactic superweapon.

When George Lucas first showcased the Death Star in A New Hope, he used a 3-foot-diameter model of the weapon, filming it small in frame. After the movie wrapped, the sets were struck and everything was shipped to a storage locker in northern California, where it was promptly forgotten. “When George was making the film, no one expected this would become a worldwide phenomenon,” says Knoll. After a few years, no one had claimed any of the items, and the locker was auctioned off; the miniature was eventually sold to Guz Lopez, an Amazon employee who unofficially operates the world’s largest Star Wars museum. “It was definitely an oversight,” admits Knoll.

Computers and software had advanced enough in the decades since the fourth, and subsequent, episodes debuted, so using models wasn’t entirely necessary anymore—”The hardware has improved greatly, even from just five years ago,” says Paul—but Knoll realized after Rogue One’s script began development that ILM’s digital model shop would still need an original wire frame representation of the Death Star.

“Sooner or later we’d need to depict the Death Star in space,” says Knoll of his thought-process before filming started. “We would need the equivalent of that model.”

Jyn Erso’s mission is to stop the development of the craft, which means the Death Star would in effect become a character in the film—in fact, more so than the folks at ILM expected. “We didn’t think it would be a background character,” says Paul, “but we didn’t think we would be seeing it at the level we see it.”

The crux of ILM’s concerns centered on upholding expectations from pop culture’s arguably most rabid fan base. “When people see this Death Star, it needs to like the one we know and love from Episode Four,” says Knoll, “and while it might not matter that every panel is in the right place, but as someone who loves this, I thought it was possible to do a very accurate reconstruction.”

He continues, “Gareth directs with a very documentary-vérité shooting style, which is often a matter of reproducing how you remember something, and not necessarily how it actually was. When it came to the Death Star, he wanted to recreate these familiar images but with better execution.”

Since that original miniature was MIA, though, Knoll used Modo, a 3D modeling software, in the summer of 2013 to recreate the Death Star from scratch. “I figured it would be a fun project,” he says. He pulled frames of the Death Star from the restored original negative and hewed closely to recently found video of the graphic animation—those two sources formed the basis for Knoll’s reimagined Death Star.

To further depict all the Death Star’s intricacies—from the thousands of panels to the stippling—as it would appear in Rogue One, Knoll gathered roughly 30 images of the original model (pulled from archives and pulled from the internet) and working within Photoshop, he redrew each image. “I wanted pictures of the upper and lower hemisphere, and closeups,” he says. “Basically, anything I could find.” These drawings included those stipples, which conceptual designer and illustrator Ralph McQuarrie crafted for the original model’s exterior.

Though Knoll says it was a “time consuming and tedious process,” the joy is clearly evident in his voice as he talks about re-creating and re-introducing the Death Star. “I’d be busy all day in production meetings, and then at night, when I was free, I would head to my library office and work on these little projects.” After he finished each line drawing, he transferred those works to Modo, where he projected this intricately orchestrated master map of panels and line work onto his CG model of the Death Star and then unwrapped it. This rendering is the basis for what appears in the film. “The Death Star has so much more detail now, with additional scale and scope,” says Knoll, who even took some time to refine the battleship’s dimensions, which had always been uneven and particularly oblong in the southern hemisphere.

“It is tricky to marry all the looks of the Death Star,” he says. “The original’s stipple pattern meant representing the fine light and shadows from the tiles. We accomplished that with geometric details and enough variation that if you squint, this new Death Star looks like a piece of the 3-foot model.”

Knoll refers to these details as “octaves,” and when he handed off the wire frame design to Paul and his crew of three artists to provide the Death Star with a “whole new level of realism.” Alternating between several different computer software programs—Maya for modeling, MARI for texturing packages, and Katana for rendering—Paul created various Death Star models. One particular iteration he developed was a Death Star involved sunlight raking across the surface. “We were able to model with interactive lighting and shadows, and how that light plays off the Death Star,” he says. “We had never been able to do that before.”

Paul initially allocated about six weeks to create all the various Death Star models, but after five months, his team was still in development when I spoke with him this fall. “To get that look we need, it’s been one of the most challenging assets,” he claims.

But what is truly sets Rogue One’s Death Star apart from all other versions, and how it transformed from an abstract villain to one that has the weight of any of the film’s characters, is its use of massive LED panels, which are regarded as the future of lighting within filmmaking due to how relatively easy they are to work with. Supplied by VER, a leading LED lighting and effects company that created the 20′-by-20′ box used to illuminate Sandra Bullock’s face in Gravity, the 700-plus LED panels were used in a variety of ways to make the Death Star feel like it actually existed in real life.

“There is a scene in which a character looks like of the living quarters and sees a planet outside,” says Jonny Hunt, a project manager at VER. “Normally, this would be shot on green screen, and the planet would be added in post production, but because we could feed content to the LED screen, it not only provided a lighting effect but the scene felt more realistic.”

VER constructed two different LED panels—the 52-foot-high fixture was used in scenes featuring the Death Star’s bridge; the other, a gimbal stabilizer rig that was a whopping 114 feet high, helped authenticate Rogue One’s spacecraft. The former was used as both a lighting source and in place of green screen: Greig Frasier, the film’s director of photography, had wanted to use VER ever since he watched Gravity, and the company, which has worked on films such as Birth of a Nation and The Jungle Book, has become a leader in the burgeoning field of alternative LED usage.

For the handful of scenes filmed in the bridge, the nearly 900,000 LEDs helped not only illuminate the shot, they were used as a backdrop to display digital content (like nearby planets outside and interactive maps), as well as to create a desired reflection on the set’s glossy black floor. Frasier could play around with different soft lighting techniques because of the glare of those LED panels, and the reflections interspersed with the actors’ movements added another element of realism. “That is impossible to put in post-production,” says Hunt.

When it came time to film scenes involving X-wings and other spacecraft, Rogue One relied on the gimbal, which was the biggest Hunt has ever seen. VER had about a month or so to build the rig—the other panel took about a day because, Hunt says, “We are used to work in rock n roll and concert touring, so we are used to putting things in quickly”—and it was assembled specifically as a lighting source. The gimbal was essentially a 180-degree curved cylinder with a roof and more than 5 million LEDs. It was crucial, though, for scenes involving hyperspeed: “That movement of a person from front to back in hyperspeed is quite difficult to achieve with moving lights [how scenes are typically lit], whereas if you just play back a clip on the media server onto an LED setup that is all encompassing, then the lighting is at it would be if someone was really going through hyperspeed.”

Hunt continues, “There are bigger installations out there, but compared to Gravity, this film’s gimbal is 10 times the size.”

Regardless of Rogue One’s critical and commercial success, the film’s dedication to the details of the Star Wars universe, as well as its use of LEDs, could make Rogue One a groundbreaking work.