Lichens Can Be Made Of Three Organisms, Not Just Two

Fungi and a photosynthetic partner also work with fungal yeast 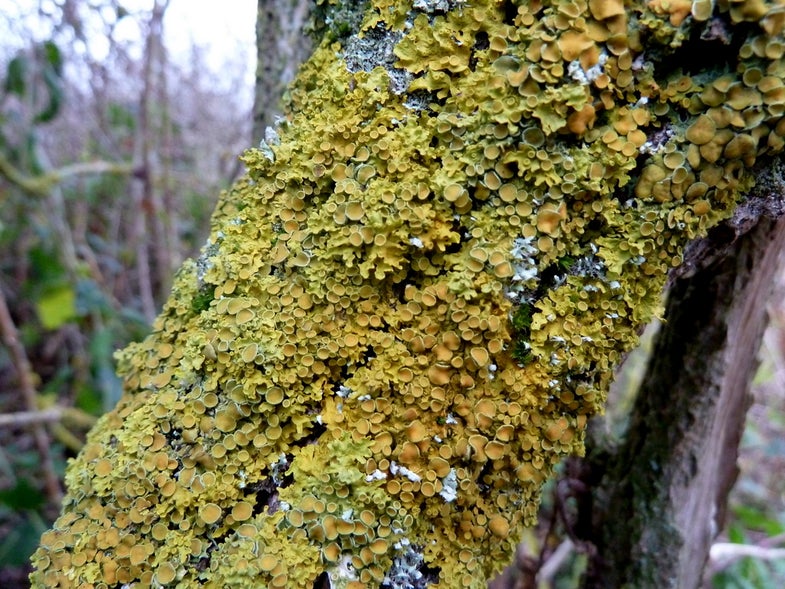 Lichens, a mix of fungi and other organisms, are all around us, covering that tree on the side of the road or growing on an old building. The ancient combination of organisms has been a textbook example of symbiosis, a relationship between two organisms, for more than a century. It’s a composite, where either algae or cyanobacteria live inside tiny structures made by a fungus.

“There is a long, venerable history of scientists and natural historians who have peered at lichens through microscopes since the 1800s,” said Toby Spribille, a postdoctoral researcher at the University of Montana and first author of the study, in a press release.

“The yeasts were always there, and somehow we got to crack it open. It gives me goosebumps.”

The team of international researchers came across this monumental finding when genetically testing two types of lichen that came up time and time again as the same. But the researchers could see that they were clearly not the same physically.

One lichen, Bryoria fremontii is dark brown, while the other B. tortuosa was yellow, and produced a toxic substance, vulpinic acid, to boot.

When the testing kept coming up genetically identical, the researchers decided to extend the amount of fungi they were testing for. Instead of staying with the ascomycete fungi that are the known partner in lichens, the researchers tested for basidiomycetes, a separate phylum of fungi. And they got a hit.

For years, scientists knew the roles of the symbiotic partners. The ascomycete fungi provide shelter, while the photosynthetic partner, which could be algae or cyanobacteria, produces food from the sun.

It is now hypothesized that this third partner, yeast, protects the organisms, like through the production of toxic vulpinic acid.

Once the scientists found the yeast, they tested other specimens from the same collection area, sites in western Montana, and then started testing lichens from all over, like species from Northern Europe. They found that 52 separate genera, on six different continents, also contained yeast in their midst.

The researchers, surprised by their findings, believe that this just goes to show how more research is always needed.

“This discovery overturns our longstanding assumptions about the best-studied symbiotic relationship on the planet,” said coauthor M. Catherine Aime, professor of botany and plant pathology at Purdue University in a press release.

“These yeasts comprise a whole lineage that no one knew existed, and yet they are in a variety of lichens on every continent as a third symbiotic partner. This is an excellent example of how things can be hidden right under our eyes and why it is crucial that we keep studying the microbial world.”