Evolution in the absence of biological molecules 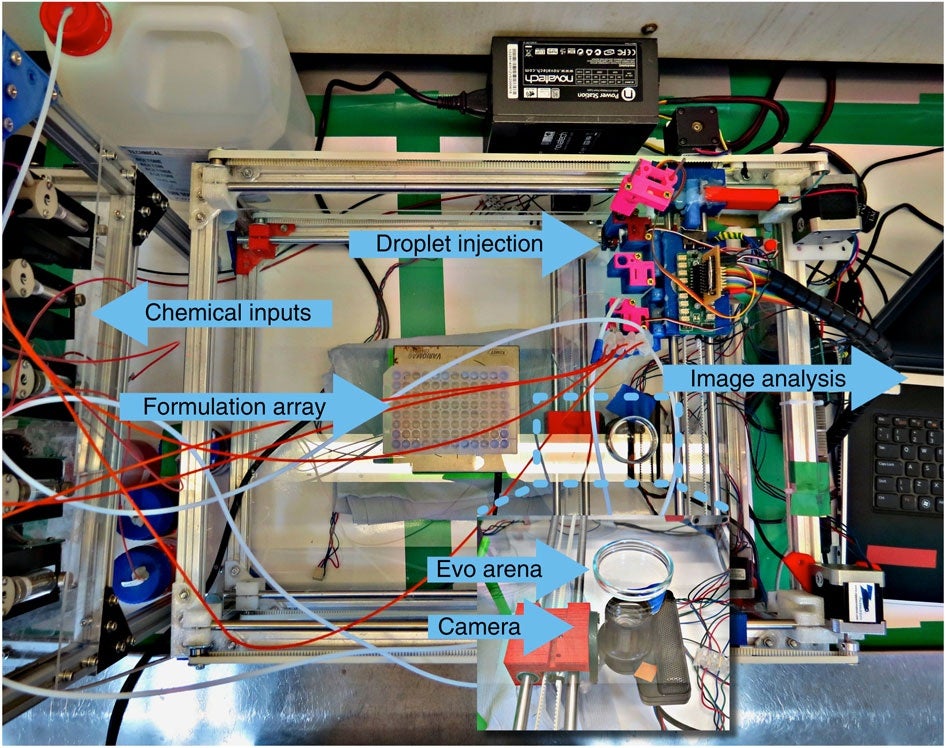 We’ve seen evolution enacted with early-Earth chemicals, with hermaphroditic robots, and even entirely virtually, using mathematical models. In each, scientists or engineers give the experiment some starting conditions, let it run… then see what happens dozens or hundreds of generations later. There’s something appealing about such experiments. Who wouldn’t want to play evolution?

Here’s the latest evolution experiment I’ve found, which takes a tack I’ve never encountered before. The setup shows that evolution can occur in pretty minimal conditions. Other scientists could also use the setup to study how chemical structures evolve outside of biology. The experiment, run by a team of chemists from the U.K.’s University of Glasgow, is based entirely on oil droplets floating in a water-based solution. The study didn’t include any biological molecules, although the robot in charge did follow important biological principles, including reproducing “fit” individuals and killing off unfit ones.

The experiment began with a custom-programmed robot, based on a RepRap 3-D printer, releasing oil drops into this world from a nozzle. The droplets were made of different combinations of oily substances: 1-octanol, diethyl phthalate, 1-pentanol, octanoic acid, and dodecane. That made different “species” of droplets, each with their own densities, viscosities, surface tensions, and other traits. Chemical interactions on their surfaces made some of them blub around in their watery world, or divide into smaller droplets, or rotate or shiver in place.

The setup shows that evolution can occur in pretty minimal conditions.

The robot watched how the drops behaved. It plopped out new drops—”offspring” of drops it observed were “fit,” according to its programming. Once in a while, the robot would plunge in and suck out certain drops that weren’t moving around enough. Harsh!

After 21 generations, depending on how the robot was programmed to cull the droplets, populations of droplets emerged that were really good at dividing, zooming around, or vibrating (the worst superpower).

In the future, by dialing back the computer’s involvement, this kind of experimental setup could be used to explore what the minimum requirements are for evolution to happen, the research team wrote in a paper, published yesterday in the journal Nature Communications. Perhaps all you need is a little oil and water.