We talked to the artist who created the car wreck survivalist, Graham 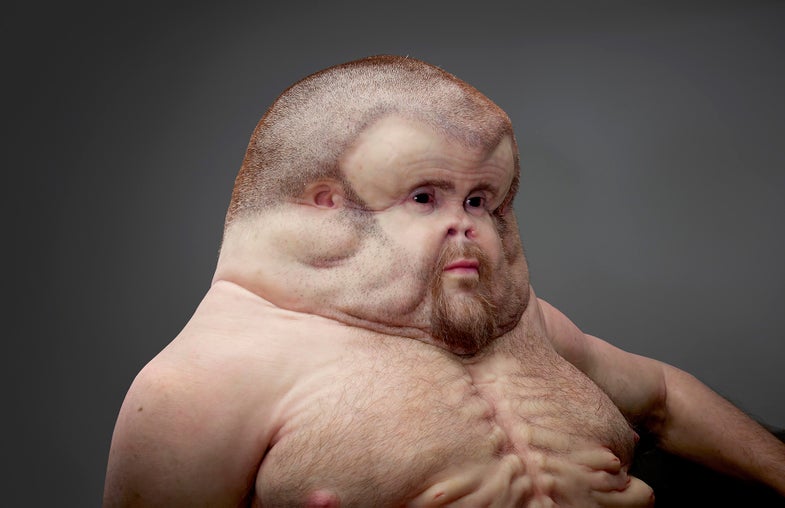 There’s something a bit grasshopper-like about Graham. This man-sized sculpture sports a head that melds right into his torso, which is supported by a pair of strong, springy legs. But Graham’s fleshy, if oddly proportioned, body is definitely human. He’s just better adapted to life on the roads than the rest of us.

Graham was thought up by the Australian government’s Transport Accident Commission, and designed by Melbourne-based artist Patricia Piccinini, to highlight how ill-equipped humans are to survive a car crash. “I learned a lot about what breaks when people are involved in car accidents,” she said in an email to Popular Science. “We have evolved to survive falls at walking or running speeds, but not at the sort of speeds the are typical in the world of cars.”

Before creating Graham, Piccinini was responsible for the many-nippled Skywhale, a hot-air balloon commissioned for the 100th anniversary of Canberra (Australia’s capital). “Patricia’s interest in combining technology and nature as she approaches her works made her the ideal artist for this project,” Emily Bogue, Media and Communications Manager at the Transport Accident Commission, told Popular Science in an email.

To design a human who is actually adapted to survive low-speed crashes, Piccinini consulted with a trauma surgeon and a road safety engineer. “I was always asking: what is the least I can do or change to protect these vital areas?” she says. “What structures already exist and how can they be built upon so that Graham always remains obviously human?”

After sketching Graham out and developing a 3D computer model, Piccinini and her technicians created a full-scale model in plasticine and used it to create a mold. “From there a cast is made in silicone, which is painted and has hair punched into it,” she says. “It is a fairly standard special effects production process.”

Unlike the average person, Graham has a ribcage full of airbags to absorb force and safeguard his organs. Cradling these sacks is a big chest with strong ribs. Graham’s skull is meant to absorb force too, and is built thick like a helmet. It’s got built-in crumple zones too, to slow his head as it lurches forward in a crash. Extra cerebrospinal fluid cushions his brain, while facial fat offers padding around his ears and nose (which is flat, to keep from breaking).

Graham is also in no danger from whiplash or a broken neck, because he doesn’t have one. Even his skin is tougher than ours. And when Graham is a pedestrian, strong, many-jointed legs allow him to leap to safety. If a car does hit Graham, his knees are secured by extra tendons that allow them to bend in all directions and avoid fractures.

“We are aiming towards zero deaths and serious injuries on our roads, so that means everyone in the community understanding why they need to be in safer cars, driving on safer roads and at safer speeds,” Bogue added. “So with our agency Clemenger, we came up with this idea to show what we would have to look like if we weren’t so vulnerable.”

Graham will be hanging out at the State Library of Victoria until August 8, before traveling to other galleries in the state of Victoria. His fans can use Google’s augmented reality technology, Project Tango, to get under his skin for a closer look at his adaptations.

“The most challenging and important part is making sure that the project remains an artwork with emotional weight rather than a diagram of scientific ideas,” Piccinini says. Her favorite feature of Graham’s is his soulful eyes.

Graham might inspire some people to reflect on our own fragility, and others to gawk at his unusual features. Piccinini says she expects it’s a mixture. “However, anyone who looks at the work and wonders what it is, why it looks like it does is thinking a bit about road safety.”