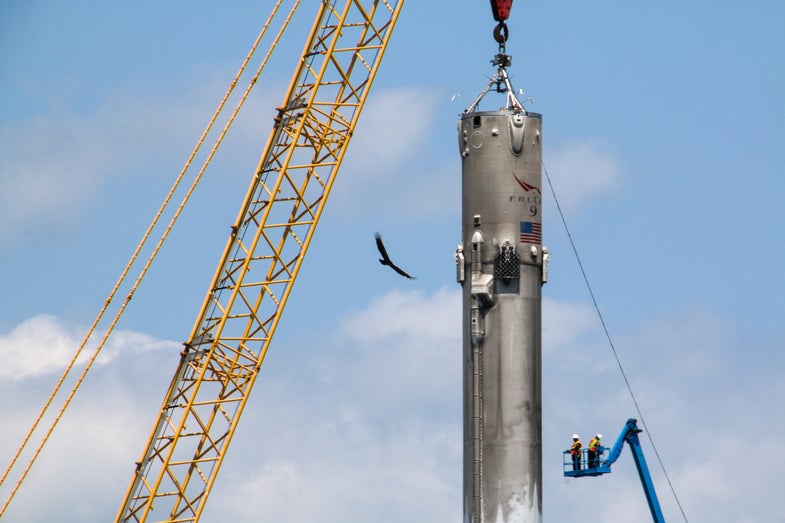 On Friday, SpaceX made history by landing its Falcon 9 rocket booster on a drone ship. The move will help the company recover and reuse more rockets after they launch, and the achievement was a long time in the making–SpaceX tried for more than a year to stick the drone ship landing, suffering many explosive failures along the way. They’ve finally done it! Now they just need to get that thing back to Cape Canaveral.

The drone ship “Of Course I Still Love You” brought the Falcon 9 back to port a little later than expected. It was supposed to arrive on Sunday, but actually docked in the early hours of Tuesday morning. The unloading process has taken several days so far, and is expected to last at least another day or so. Understandable, since we’re talking about a 15-story rocket stage with potentially hazardous chemicals onboard.

During a press conference last week, SpaceX CEO Elon Musk said,”We’re a little bit like the dog that caught the bus–what do we do now?” It’s the first time the company has had the opportunity to attempt the unloading procedure, and it will doubtless go more smoothly if/when these drone ship landings become more frequent.

Once it can get the rocket lying down horizontally on a transport vehicle, SpaceX is hoping to bring the used Falcon 9 to Cape Canaveral for testing and, if all goes well, will relaunch in a couple of months.

Our photographer is still at the docks watching the unloading process–we’ll add more pictures here if we see anything noteworthy.