PopSci is at the launch site with fingers crossed 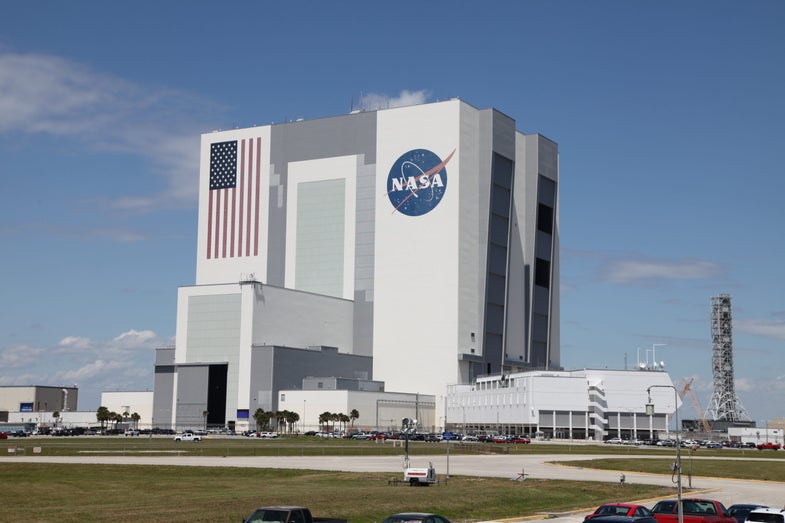 Driving down NASA Causeway, it becomes pretty easy to see why they call this the Space Coast. At a certain point, the palm trees and dense shrubbery lining the road give way and the lanes suddenly trace a narrow strip of land with water on both sides. In this flat expanse, you can see the Kennedy Space Center’s life-size space shuttle mock up and its giant orange fuel tank from miles away.

From the launch pads at historic Cape Canaveral, commercial spaceflight companies are trying to take up the mantle of the retired space shuttle in delivering supplies to the International Space Station. It hasn’t always gone well. SpaceX’s last cargo resupply attempt went up in smoke, but now the company is ready to try again.

This afternoon, SpaceX will attempt to launch its Falcon 9 rocket to the space station with 7,000 pounds of supplies and experiments. The launch is scheduled for takeoff at 4:43 PM Eastern and you can watch it here.

The weather is beautiful here in Florida, and there’s a 90 percent chance that’ll hold for the launch. The question is whether the Falcon 9 will be ready. During the last launch, SpaceX had problems keeping the fuel cold enough. (Colder propellant is more dense, which means the rocket can fit more inside its tank, which means it can go farther on one tank of gas.) During a press conference yesterday, SpaceX officials didn’t seem entirely confident the problem had been fixed.

There’s a lot riding on this mission—including what could be the predecessor for astronauts’ future homes on the moon and Mars. Bigelow Aerospace’s expandable space habitats may provide a new way of living in space, replacing the ISS’s tin cans with a flexible structure that’s more like a pop-up tent.

An experimental version of the habitat, named the Bigelow Expandable Activities Module, will launch on this mission. If BEAM can maintain a safe environment for astronauts—sensors will be tracking its temperature, pressure, and radiation levels—it could rewrite the rules of space habitat design. No longer will a space station’s size be limited by the size of the rocket it rides in. Instead, it can ride compressed inside a rocket fairing, then expand to its full size in space.

About 250 other experiments are riding along in the Dragon capsule as well, including an experiment that could pave the way for astronauts to grow their own medicines during long-term spaceflight.

The Dragon should reach orbit about 10 minutes after takeoff, and it will arrive at the space station in the wee hours of Sunday morning.

The boosters that lift the Dragon and its cargo off the Earth will come back down after the launch and attempt to land on a drone ship in the Atlantic a few minutes after takeoff.

WATCH: SpaceX Has Successfully Landed Its Rocket On A Droneship!

The Dragon capsule will also return to Earth. After astronauts unload the fresh supplies onto the space station, they’ll load Dragon with waste products as well as the blood, urine, and probably other samples collected from astronaut Scott Kelly during his record-breaking year-long stay on the ISS. Scientists here on Earth are looking forward to analyzing those.

The Dragon will splash down in the Pacific Ocean on May 11. From whence it was born, so shall it return.