Never seen a rocket launch before? Here's where to look! 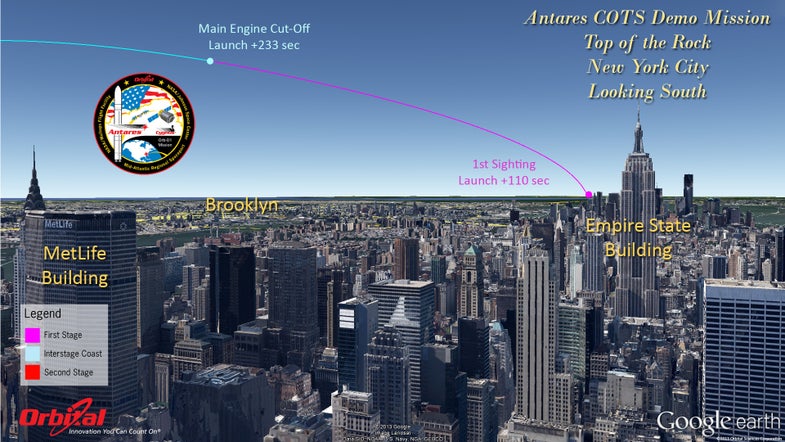 WALLOPS ISLAND, VA – “All Systems Are GO” for the Sept. 18 launch of Orbital Sciences Antares commercial rocket carrying the first ever fully functional Cygnus commercial resupply vehicle to orbit on the history making first flight blasting off from NASA’s Wallops Island Facility—along the eastern shore of Virginia and bound for the International Space Station.

Here’s our guide on “How to See the Antares/Cygnus Launch”—complete with viewing maps and trajectory graphics from a variety of prime viewing locations courtesy of Orbital Sciences, the private company that developed both the Antares rocket and Cygnus spaceship aimed at keeping the ISS fully operational for science research.

And although the launch is slated for late morning it should still be visible to millions of spectators along a lengthy swath of the U.S. East Coast from North Carolina to Connecticut—weather permitting—who may have never before witnessed such a mighty rocket launch.

The daylight liftoff of the powerful two stage Antares rocket is scheduled for Wednesday, Sept 18 at 10:50 a.m. EDT from Launch Pad 0A at the Mid-Atlantic Regional Spaceport at NASA Wallops Island, Virginia. The launch window extends 15 minutes to 11:05 a.m.

Up top is the view as anticipated from “The Top of the Rock” or Rockefeller Center in New York City. See below the extraordinary image of LADEE’s launch from “Top of the Rock” by Ben Cooper to compare the day and night time sighting delights.

In anticipation of liftoff, the Antares rocket was rolled out to Pad 0A on Friday morning Sept. 13 and I was on hand for the entire event – see my rollout photos here and upcoming.

Seaside panoramic view of Antares rocket and Cygnus spacecraft after rollout to Launch Pad 0A at NASA Wallops at the Virginia Eastern Shore on Sept. 13, 2013. Blastoff for the ISS is slated for Sept. 18, 2013 at 10:50 a.m. EDT. LADEE launch pad 0B stands adjacent to right of Antares. 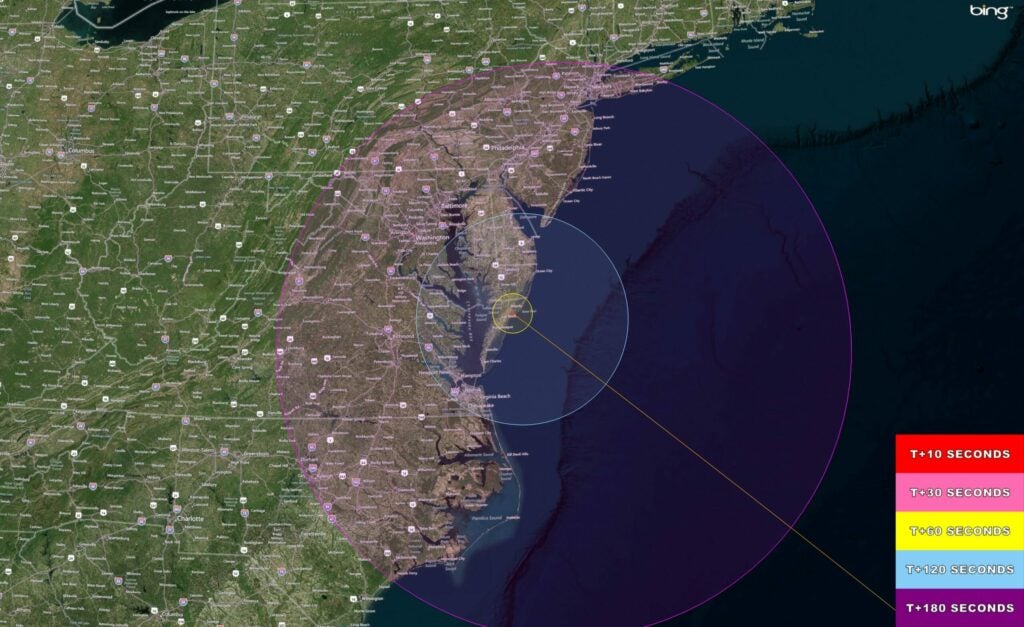 The Antares/Cygnus daylight rocket launch on Sept. 18, 2013 at 10:50 a.m. EDT from NASA Wallops, VA. will potentially be visible to millions of spectators along the Eastern US coast from Connecticut to North Carolina -weather permitting. This high resolution map shows the regions of visibility over time in the seconds after the rocket launch on a demonstration cargo resupply mission to the International Space Station.

The Antares launch follows closely on the heels of the spectacularly bright Sept. 6 nighttime Moon shot blastoff of the Minotaur V rocket that successfully injected NASA’s LADEE lunar orbiter into its translunar trajectory.

And just as was the case with the Minotaur V and LADEE, you don’t have to be watching locally to join in and experience all the fun and excitement. As with any NASA launch, you can also follow along with up to the minute play by play by watching the NASA TV webcast online or on smartphones, iPods or laptops. 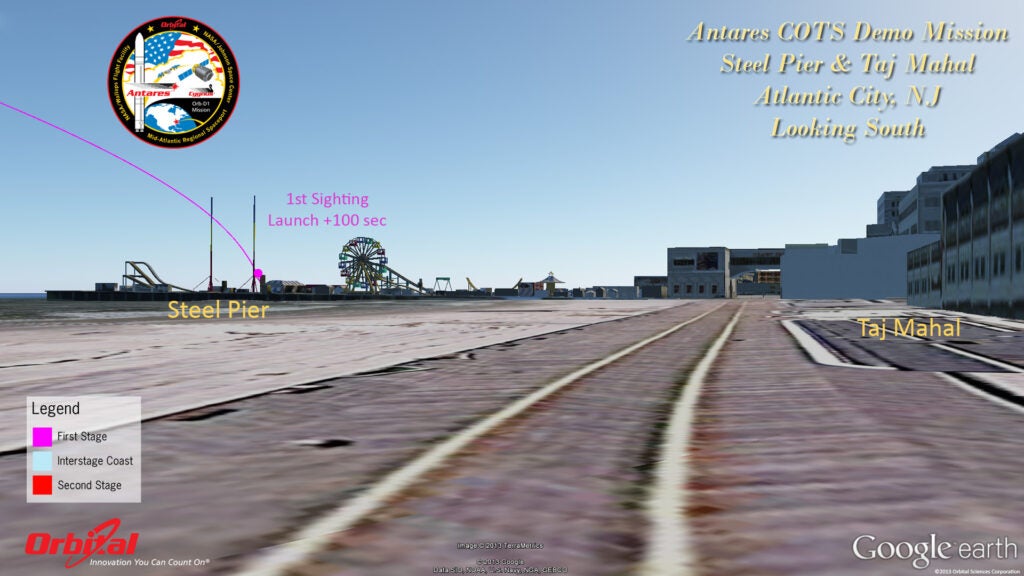 It’s hard to say exactly how long and how bright the rockets flames and exhaust trail will be visible since it depends on the constantly changing lighting, prevailing clouds and overall weather conditions.

But one thing is for sure. If you don’t go outside and watch you’re giving up a great opportunity.
And keep in mind that Antares will be moving significantly slower than the Minotaur V.

Herein are a series of graphics showing the Antares trajectory and what you should see during firings of both stages from the perspective of standing on the ground or skyscrapers at a variety of popular destinations including Annapolis, the US Capitol, Lincoln Memorial, National Air and Space Museum, Atlantic City, NJ, New York City and more. 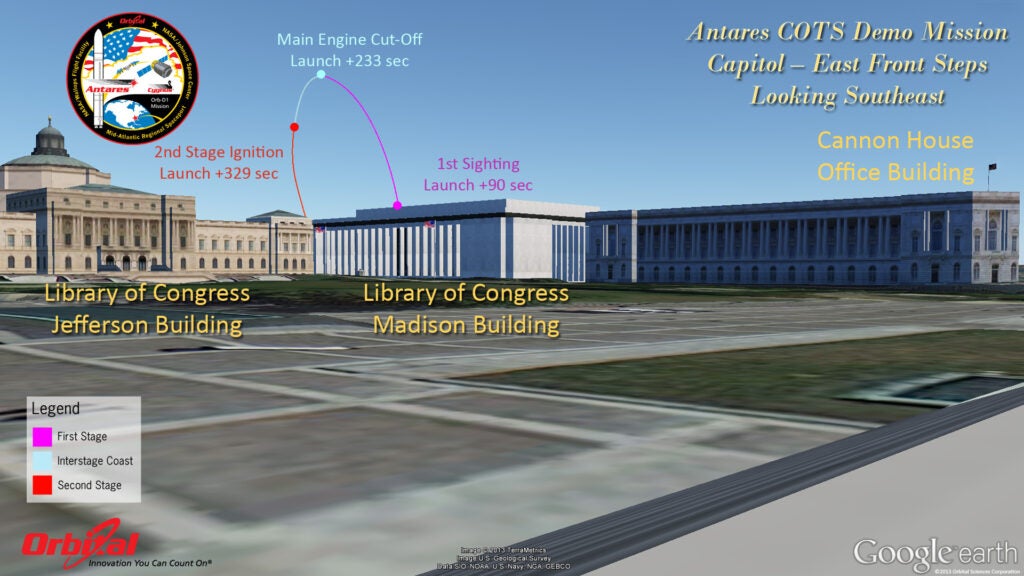 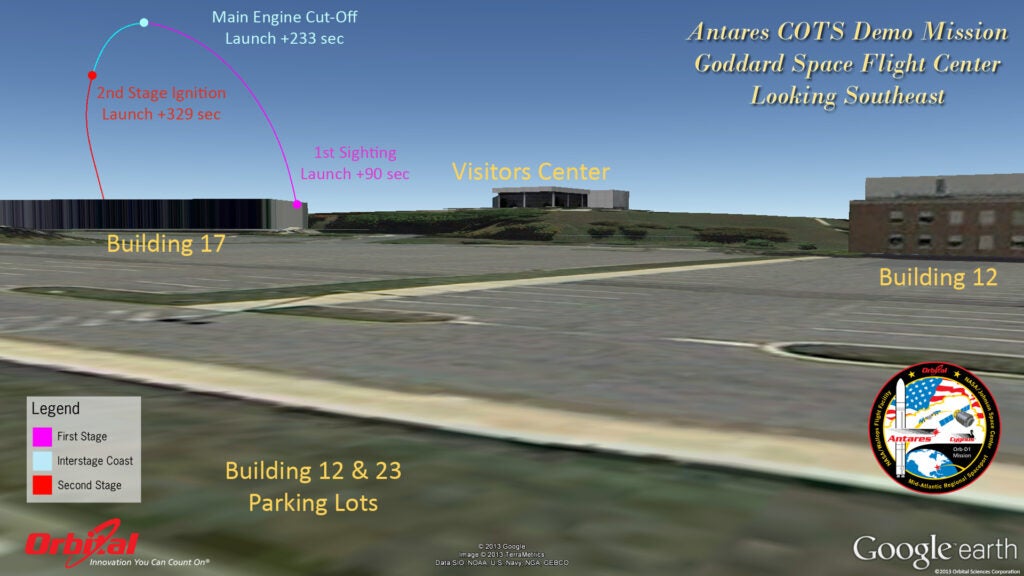 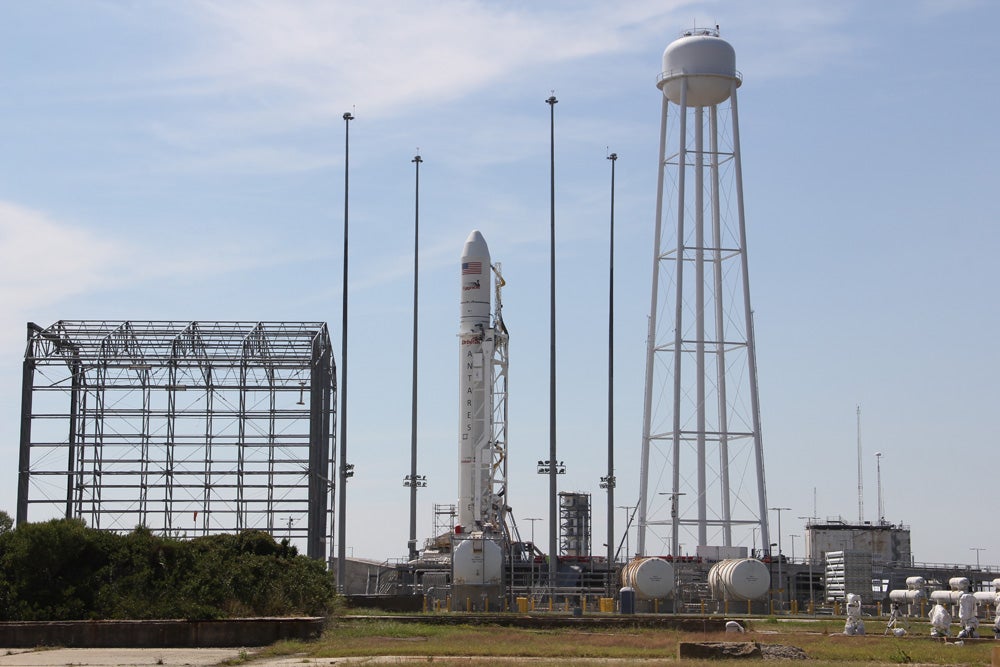 Antares rocket and Cygnus spacecraft after rollout to Launch Pad 0A

The goal of the mission is to demonstrate the safe and successful launch, rendezvous and docking of the privately developed Cygnus cargo carrier with the International Space Station and delivery of 1300 pounds of essential supplies, food, clothing, spare parts and science gear to the six person resident human crews – currently Expedition 37.

Although it’s the 2nd launch of Antares following the maiden flight in April, this is the first flight of the Cygnus commercial delivery system. The demonstration and testing will be the same as what SpaceX accomplished in 2012 with their competing Falcon 9/Dragon architecture.

The mission is designated Orb-D1 and is funded with seed money by NASA’s COTS program to replace the cargo delivery duties of NASA’s now retired Space Shuttle orbiters. 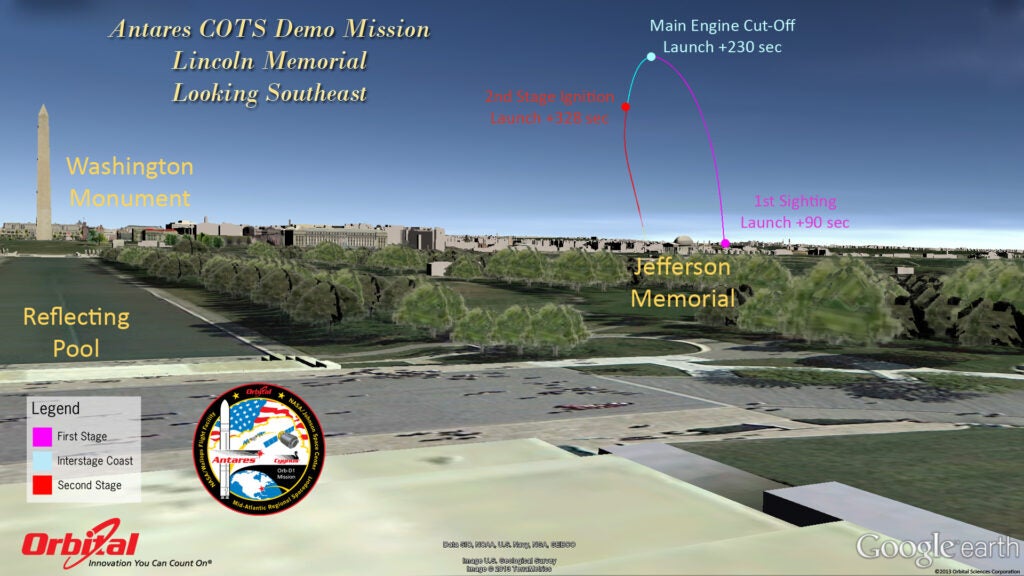 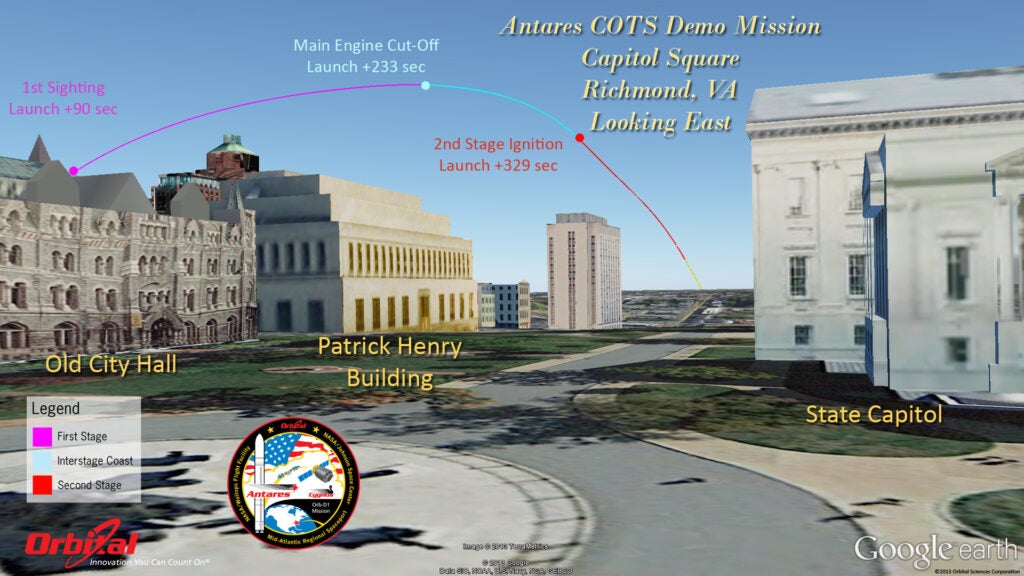 For those who are traveling to witness the launch locally in the Chincoteague, Va., area, there will be two public viewing sites said Jeremy Eggers, NASA Wallops Public Affairs Officer in an interview with Universe Today.

“There will be are two local sites open to the public,” Eggers told me. “Folks can watch at either the NASA Wallops Flight facility Visitors Center (http://sites.wff.nasa.gov/wvc/) or the beach at Assateague National Seashore (http://www.nps.gov/asis/index.htm/).”

“There will be loudspeakers to follow the progress of the countdown, but no TV screens as done with the LADEE launch.” 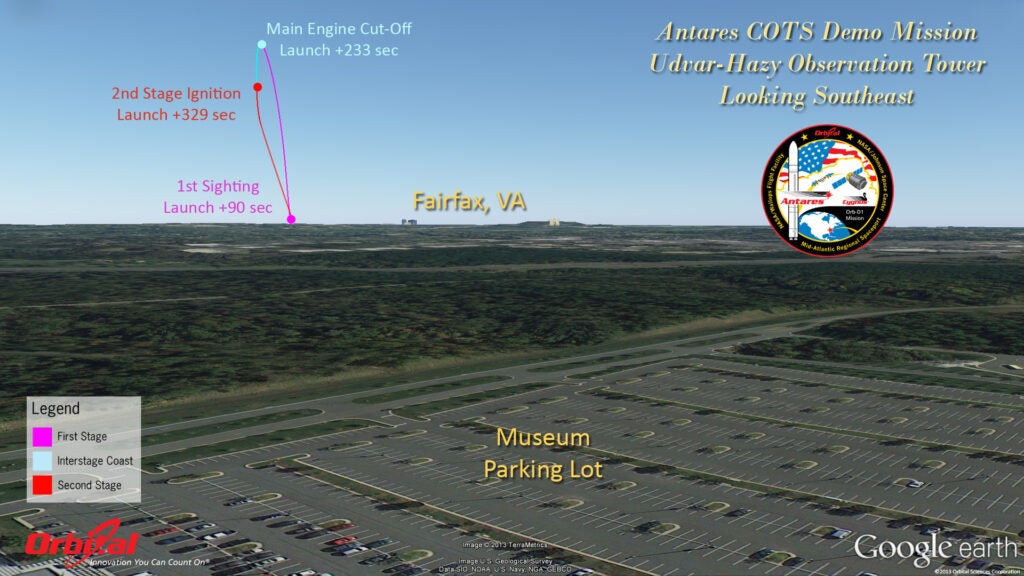 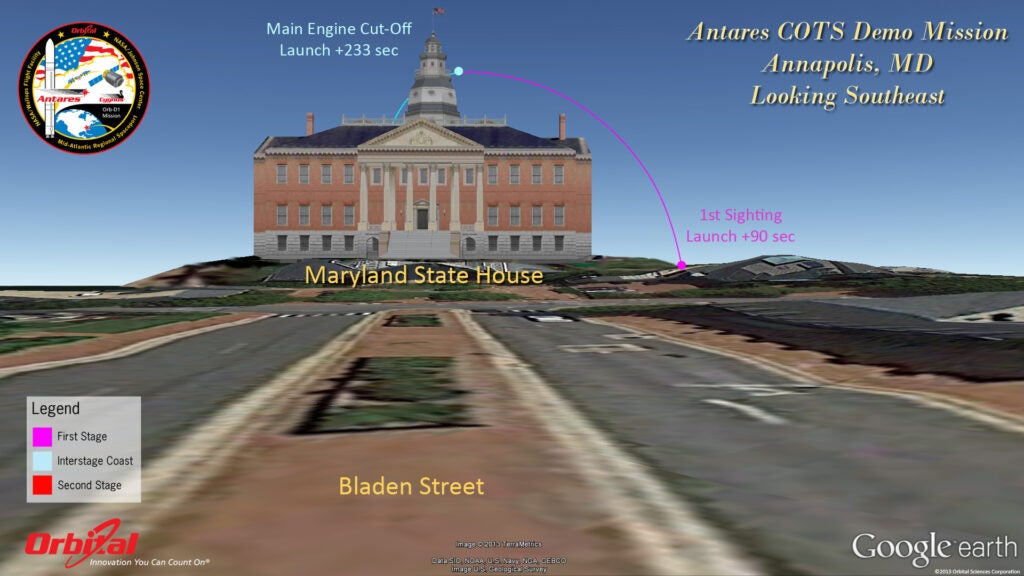 So far the weather outlook is promising with a 75% chance of “GO” with favorable conditions at launch time.

Be sure to watch for my continuing Antares and LADEE mission reports from on site at NASA’s Wallops Launch Pads in sunny Virginia—reporting for Universe Today.