Welcome To The Inflatable Space Age 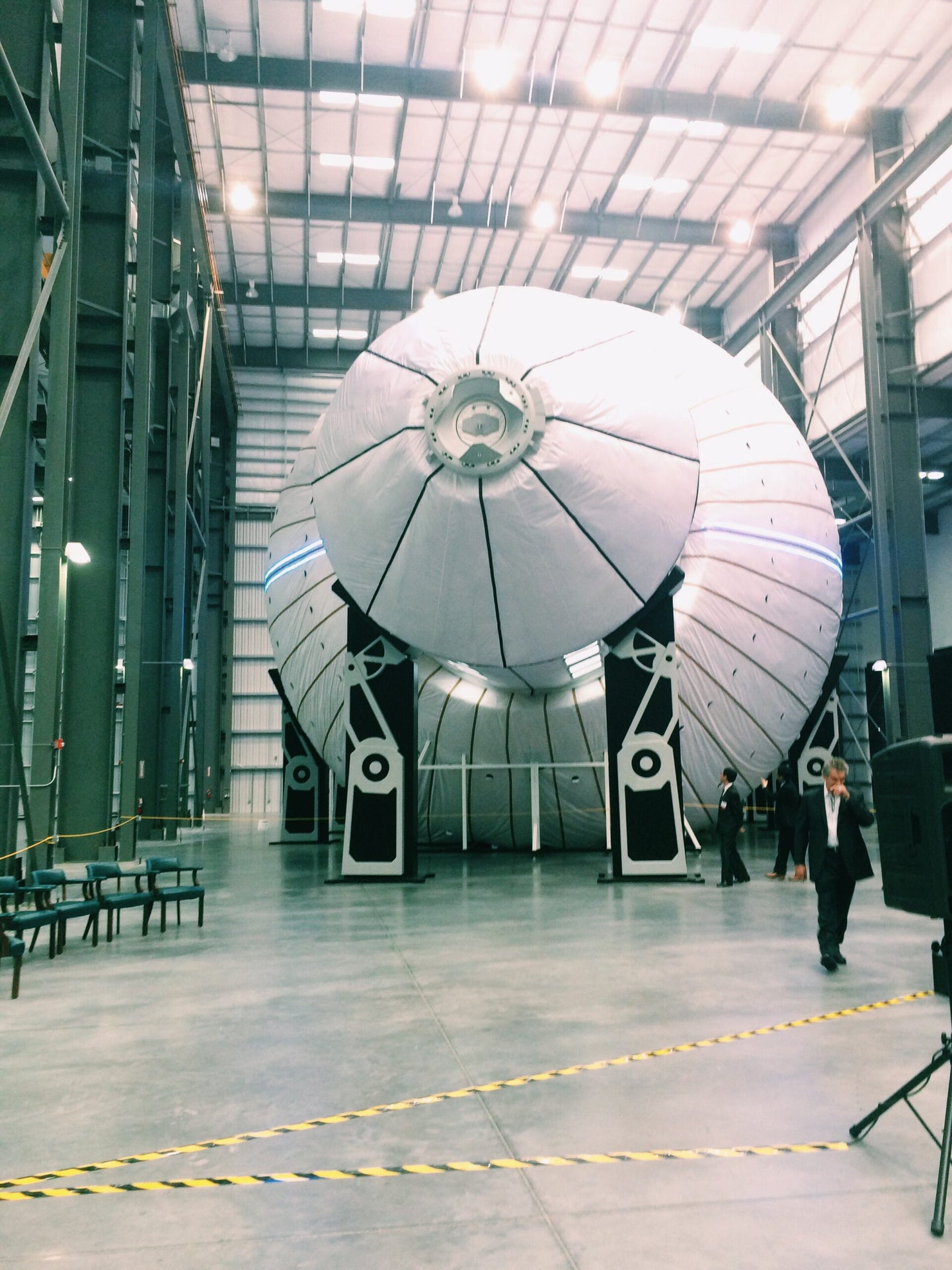 Bigelow Aerospace's BA-330 inflatable habitat could one day provide lodgings on the moon. In 2016, a smaller version of the habitat will be tested on the International Space Station. Ryan Bradley
SHARE 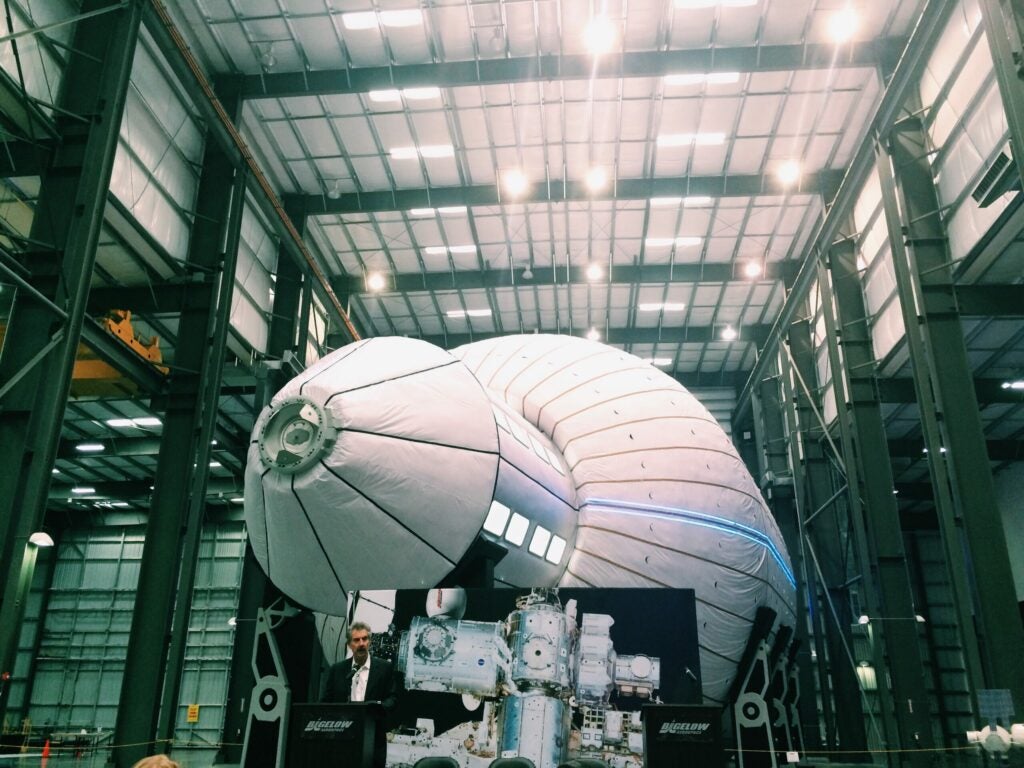 Processed with VSCOcam with c1 preset

This morning Robert Bigelow—budget hotel billionaire; paranormal investigator; space entrepreneur—unveiled the Bigelow Expandable Activity Module (BEAM), which will soon ship to Kennedy Space Center, stowed in a SpaceX rocket. It will launch in September, expand, dock with the International Space Station, and become sort of a test chamber slash astronaut lounge. It is also—depending on who you talk to—probably the shape of much to come, in terms of extraterrestrial habitation.

I arrived at Bigelow Aerospace’s North Las Vegas headquarters early, the desert morning bright, still mercifully cool, storm clouds draped over distant snow-spattered mountains. A poster on the wall at the security check caught my eye— a fuzzy image of a small oblong craft in orbit around an earth-like planet. Along the bottom, in big blocky letters was a single word: “Believe.” The guard had on the company patch, bearing the company logo, which at first looked to me like two slanted footballs followed by a swooping line. Then I realized it was an alien head.

Bigelow’s interest in space began with his grandparents’ encounter with an alien craft, up near those mountains the storm clouds clung to. He was born and raised in Vegas, and heard their story of this terrifying encounter with a mysterious craft as a young boy, and his fascination with the mysteries of the universe never left him. Only, for forty years, he was too busy amassing a fortune in real estate, primarily via his Budget Suites chain—outposts for travelers on extended stays throughout the desert Southwest.

Bigelow Aerospace, founded 15 years ago, is a perfect melding of his real estate and extraterrestrial interests. The company makes habitats for regions even harsher than the desert. Right now, it’s low earth orbit. But eventually, maybe even soon (fifteen years to twenty), these habitats will be on the moon, housing all sorts of corporate, science, and government types (prospectors, all). The serious money, on earth and in space, has always been in business travelers.

Right now Bigelow (the company and the man) is still very much in the proving phases. Two of the company’s modules—the Genesis I and II—have launched and inflated without incident. The BEAM is the biggest, most serious step, and the result of a $17.8 million NASA contract. Today’s unveiling is a victory for the man and his company. But always hovering in the background is that eventual lunar goal. Van Morrison’s “Moondance” plays on the loudspeaker just before he steps onto the stage. And looming behind him, a prototype of the Olympus inflatable craft, a single habitat larger than the whole ISS, complete with a docking station, a possible waystation, a lunar lander transport, or moon orbiter, or low earth orbit hotel. 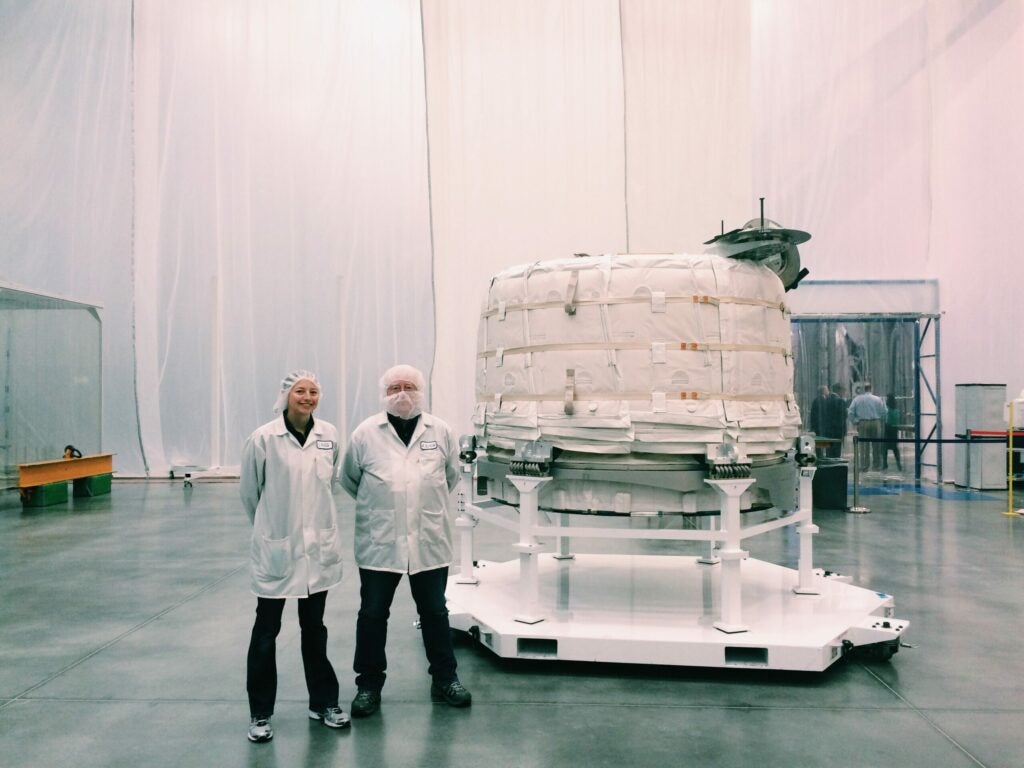 Processed with VSCOcam with c1 preset

“Two and a half years ago, they were laughing at us. Not anymore,” Bigelow says, swaying slightly behind the podium. A tall and slender drink of water, the man bears most of all the aspect of a handsome old cowboy, a space cowboy. His turns of phrase can sound oddly detached and clinical. When someone asks him about if his inflatables might have use here on earth, he says that though he’s sure some folks at the company have been thinking about the “terrestrial application,” he’s “been singularly focused on the space location.”

The hangers are so large it is difficult to grasp the actual size of things. When I go in the clean room to see the BEAM—folded down, deflated, ready for transport—it is a bit of a letdown. It’s a pretty small thing. That’s the point, though. In just four and a half minutes, when it’s ready, it will expand to about 110 square meters. Two more BEAMs, this size or maybe larger, are going to be ready by 2017. The only holdup is the rockets to get it there. “Our bet is that transportation is at hand,” the cowboy tells the crowd.

He’s “been singularly focused on the space location.”

With Bigelow on stage is William Gerstenmaier, NASA’s Associate Administrator for Human Exploration and Operations, a mouthful of a title that means, basically, these days, chief wrangler of all these private space companies cropping up. The Japanese delegation—filled with both private and public agencies and companies—is here, one of them tells me, because “this is big. This is the technology to believe in.”

Bigelow and Gerstenmaier mostly talk about what the BEAM will be doing once its docked. Namely, proving itself. Nothing like this has been part of the ISS before. It will sound different, it will retain heat differently, it will be a completely different space, it’ll be spacier, and maybe better. Maybe the astronauts will prefer it. Maybe it will turn into a kind of hangout spot.

Near the end, a French reporter asks when all this will be profitable. Bigelow replies, “Have you been talking to my wife?” Then: “My background is in practically every avenue of real estate, so I’m still learning. You can be all dressed up as a cowgirl with the boots and the hat, but without a horse, you’re incomplete. We’re waiting on the transportation. This particular field, no pun intended, has enormous expansion possibilities.”