How Fungus And Synthetic Biology Could Save Astronauts On Mars

Natural medicines, made to order in space 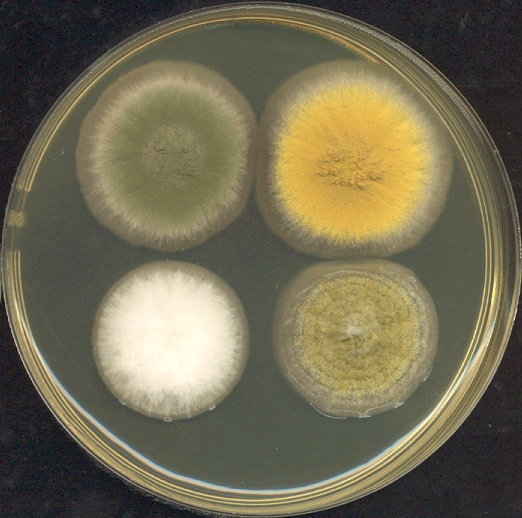 This one's not for eating. Aspergillus nidulans (shown in the top left of the image above) will be the first fungus (deliberately) brought to the space station, and it may help develop new drugs that can be used both in space and on Earth. Fungi can be an important source for natural medicines--like penicillin, for instance, which was discovered in a slime mold. But pharmacologist Clay Wang from the University of Southern California explained that fungi contain many pathways whose functions are unknown, and they could be untapped reservoirs for therapeutic agents. Wang's team is planning to grow the fuzzy green fungus on space and on the ground, then compare the two groups in terms of their genes, proteins, and metabolites. The group is wondering if the space environment will induce the fungus to create new compounds, or perhaps speed up the process of manufacturing medicines. This data could potentially help astronauts grow their own medicines in space. Adrian J. Hunter via Wiki Commons CC BY-SA 3.0
SHARE

Clay Wang brought his kids to the California Space Center a few years ago to show them the Space Shuttle. But as he looked up at Endeavour and pondered human space exploration, the pharmacologist wondered, “What if a crew runs out of medicine halfway to Mars?”

A lot of things can go wrong during a three-year mission to Mars, and there’s only so much medicine you can pack. “For food you can predict exactly how much the astronauts will need to eat,” says Wang. “Medicine you can’t predict.”

What if they develop a sudden need for a drug that wasn’t packed? Compounding the problem is the fact that the space environment seems to make many drugs lose potency and degrade more quickly compared to drugs on Earth.

Those are all reasons why Wang thinks future Mars explorers may need to grow their own medicine. And his lab at the University of Southern California is about to launch an experiment that could pave the way to make that possible.

If all goes as planned, a few lucky samples of a fungus called Aspergillus nidulans will ride on a SpaceX rocket to the International Space Station on Friday.

Future Mars explorers may need to grow their own medicine.

This particular species of fungus is important in biomedical research. Scientists basically know A. nidulans‘ genome forwards and backwards, but there are parts of it that remain mysterious. The functions of many genes are unknown, and Wang’s team is hoping the stresses of the space environment might activate those genes and generate new compounds. If you imagine A. nidulans as a factory, “it’s like a lot of machines in the factory have been turned off, so we don’t know what they make,” says Wang. “In space they might get turned on.”

In most cases, A. nidulans makes only a few classes of compounds, but Wang says his lab has found “they produce different natural products depending on the conditions they grow in.” The team is hoping that the unique, stressful conditions of space could induce the fungus to get creative and produce compounds that can be turned into medicines. That could benefit Earthlings as well as astronauts in space.

Wang’s team also wants to turn A. nidulans, or other fungi, into factories capable of making a wide diversity of drugs in space. But first they need to see how the high-radiation, low-gravity environment of the space station affects the fungus. What compounds does it produce, and in what quantities? What genes get activated versus suppressed?

To find out, they’ll send samples of the fungus to grow on the space station for a few days, then freeze the samples until they can be sent back to Earth. Once the space fungus returns, the researchers will compare its metabolites, proteins, and gene expression patterns to samples that were kept on the ground.

Next, the researchers could use that information to breed space-hardy, medicine-producing strains of fungus–either A. nidulans or other species if they find ones better suited to the job.

For example, A. nidulans is able to produce compounds that fight low bone density–a problem that afflicts astronauts who spend a lot of time outside Earth’s gravity. Normally the fungus might produce this compound in small amounts, but by selectively breeding strains that produce larger amounts of the substance, researchers can develop more potent versions. Other strains would be developed to produce other types of compounds.

“The big breakthrough is synthetic biology: the ability to reprogram these organisms.”

Wang envisions future Mars explorers carrying a few spores of each strain, which they could grow as needed, producing medicine in just 2 to 4 days. And unlike plants, the fungi don’t need soil or special lighting conditions. All they need is some food scraps and a little bit of water.

Further down the line, genetic engineering could help the fungi produce all sorts of antibacterials, antifungals, and even cancer drugs on the journey to Mars and back. They could make any natural drug that’s derived from fungi, such as the cholesterol drug lovastatin, the immunosuppressant cyclosporin (used to prevent organ transplant rejection), and griseofulvin, which helps fight athlete’s foot and other fungal infections.

“The big breakthrough is synthetic biology, the ability to reprogram these organisms,” says Wang. “Not only can we reprogram them, but we can manipulate them pretty easily.”

Eventually, Wang says, astronauts may not even need to bring a medicine cabinet full of spores to space. If Mars explorers run out of griseofulvin, Ground Control could email them the gene sequences used to produce the drug, and then a DNA synthesizer could write those codes into an artificial cell that could then produce the drug.

But while scientists are already able to write DNA into artificial cells, such a practical application of the technology may be years or decades away. With this week’s launch, Wang and his team will plant the seeds (or spores, if you will) that could help the idea grow into reality.