It’s a video indicative of the sometimes bizarre test methods NASA used during the Apollo program, and it seems to... 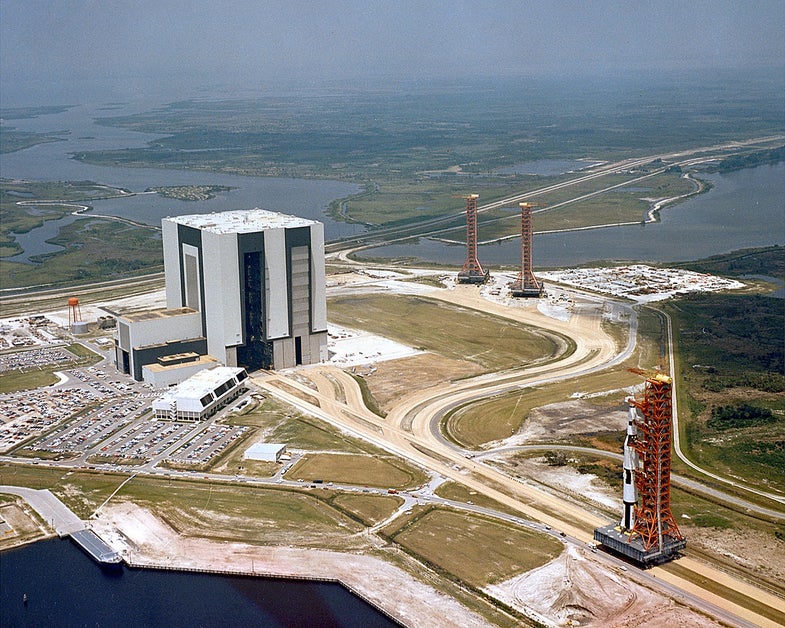 It’s a video indicative of the sometimes bizarre test methods NASA used during the Apollo program, and it seems to reappear on social media every few months. In an era before computer modeling was common, technicians physically shook a full-scale Saturn V rocket to check its structural mechanics. 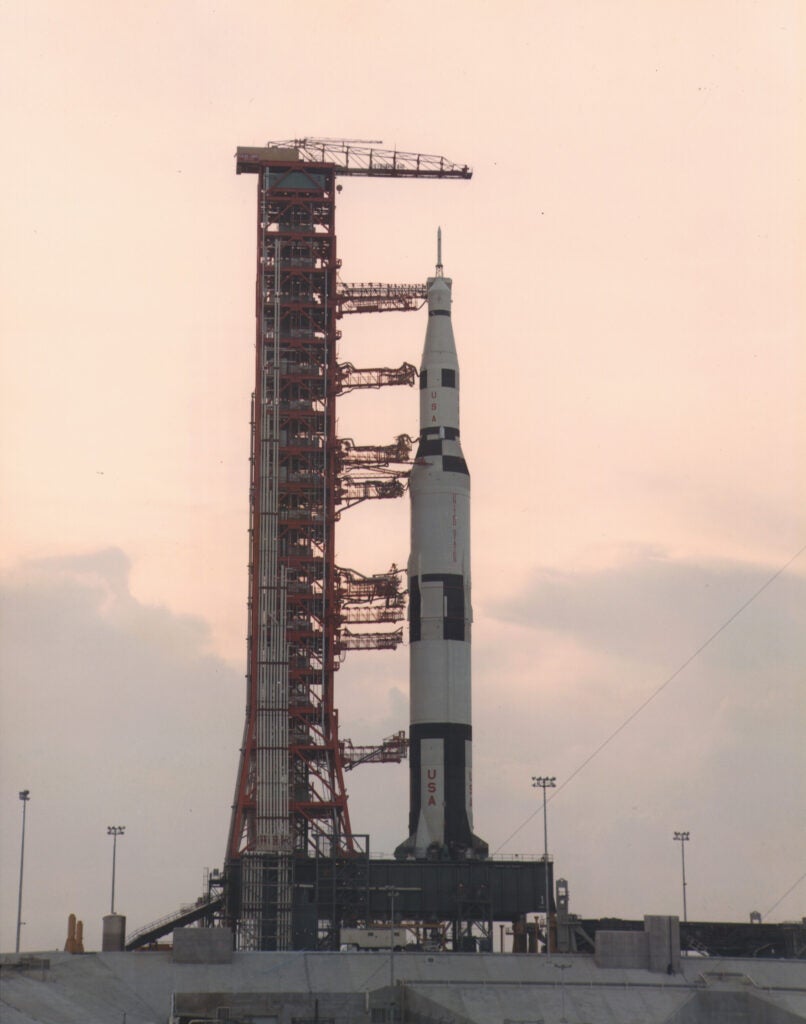 The Saturn V was a 363 foot tall multi-stage rocket built by contractors across the country. The first stage was built by Boeing, the second stage by North American Aviation, the third stage by the Douglas Aircraft company, and the instrument ring by IBM. The spacecraft, too, were built by different contractors: the command-service module also by North American and the lunar module by Grumman. It was up to NASA to assemble all those pieces and make sure they all talked to each other before launching to the Moon.

To this end, the agency used the SA (which stands for Saturn Apollo) 500F, a dummy Saturn V rocket that was exactly the same as those that would launch missions to the Moon only it couldn’t fly. This rocket is notable for its trademark black band around the middle of the first stage, something later rockets phased out to keep the stage from overheating. The paint absorbed that much heat from the Sun.

The SA-500F reached NASA’s Kennedy Space Centre in February of 1966. It was the test rocket NASA used to make sure everything it had in place to assemble, transport, and prepare the rocket for launch, from lifts to the crawler, worked. And there were some other, less obvious and less conventional tests done during this test rocket’s lifetime.

Florida’s Cape Canaveral launch site was established in 1949 as the Joint Long Range Proving Grounds by President Harry S. Truman. It was a large spot within the continental United States where the Air Force could safely test missiles over unpopulated areas, specifically the Atlantic Ocean. The early NASA missions of the Mercury and Gemini programs launched from the Air Force station as well — the Atlas and Titan missiles were both Air Force missiles and prepared for launch by Air Force crews. The Saturn family of rockets that launched Apollo needed new launch pads, but NASA wasn’t about to relocate. These mammoth rockets were launched alongside the Air Force launch range.

Unfortunately, Florida isn’t necessarily the best climate in which to have massive rockets sitting on a launch pad in preparation for a mission. Florida is known, among other things, for its hurricanes.

On June 8, 1966, SA-500F was on the launch pad where it had been undergoing fuel loading tests when Hurricane Alma rolled through. Ground crews were ordered to move the rocket back into the Vertical Assembly Building (VAB) for safekeeping. Two days later, it was rolled back onto the pad where it stayed until October 14.

Perhaps inspired by the close call with the hurricane, NASA engineers opted to do a very manual test of the full rocket’s structural integrity and elasticity. In short, what would happen if it was on the launch pad and struck by strong winds?

With apparently no specific way to test this on hand, technicians used their own hands and feet. Men pushed the rocket from the bottom with their legs to get it to sway, helped by men at the top who pulled on a rope attached near the command module. The idea was to get the rocket swaying to reveal its natural frequency, something that would give engineers some insight into its structural integrity.

The human-powered test managed to dislodge the launch system rocket that sat above the spacecraft at the very top of the rocket stack. Luckily it didn’t land on anyone. And even luckier is that this video survived. Otherwise we might never know just how hands-on some of the men who got us to the Moon really were.