Brand-New Stratolaunch, the Biggest Plane in the World, Could Replace the Space Shuttle 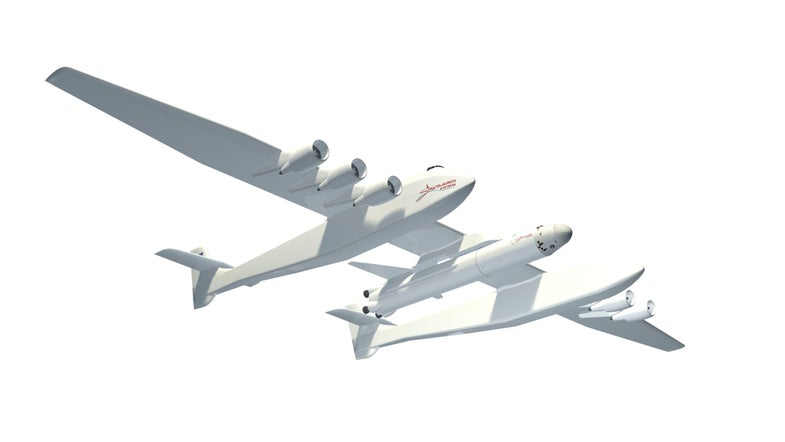 This plane will be the largest plane in the world. It's a nice model, isn't it?. via Seattle Times
SHARE

The people who built the first private aircraft to fly into space are teaming up once again to construct the largest aircraft ever flown, a behemoth air-launched orbital cargo delivery system called Stratolaunch. And SpaceX, the first company to launch a privately built spaceship into orbit, will build the rocket. As a reusable rocket-plus-glider system, it certainly seems like a potential replacement for the space shuttle.

Startup Stratolaunch Systems aims to build a humongous mothership-rocket combo craft, like a super-sized version of SpaceShipTwo. The effort combines the money of Microsoft co-founder Paul Allen, the aeronautical wizardry of Burt Rutan and the rocketry success (and, once again, money) of Elon Musk. Allen announced the plans at a news conference in Seattle Tuesday.

“I have long dreamed about taking the next big step in private space flight after the success of SpaceShipOne — to offer a flexible, orbital space delivery system,” Allen said. “We are at the dawn of radical change in the space launch industry. Stratolaunch Systems is pioneering an innovative solution that will revolutionize space travel.”

As if to punctuate Allen’s dream of providing a reusable orbital launch vehicle, former NASA administrator Michael Griffin is on the new company’s board of directors. Rutan, who retired from his company Scaled Composites earlier this year, is also on the board.

Allen and Rutan won the Ansari X Prize in 2004 for building SpaceShipOne, the first privately developed vehicle to reach outer space. The effort led to Virgin Galactic’s SpaceShipTwo effort and ignited the space tourism industry. This new venture will extend the plane-launch system to orbit and beyond, Rutan said in a statement.

The concept involves a massive parallel-fuselage carrier airplane, weighing in at 1.2 million pounds with a 385-foot wingspan (that’s longer than a football field). It would be powered by six 747 engines and could fly up to 1,300 nautical miles to reach its launch point, and would require a 12,000-foot runway for takeoff and landing.

The second part is a multi-stage rocket booster, based on SpaceX’s Falcon 9 rocket, and manufactured by SpaceX. It would be mated to the carrier plane with an integration system manufactured by Dynetics, an Alabama-based company. After the booster is released, the 490,000-pound rocket would heft cargo into orbit, on behalf of the government and commercial interests.

“Human flights will follow, after safety, reliability and operability are demonstrated,” a Stratolaunch news release said.

The huge aircraft’s space requirements will probably require it to operate from a launch facility like the Kennedy Space Center, but Griffin said the system would enable launches from a wide range of locations.

“We believe this technology has the potential to someday make spaceflight routine by removing many of the constraints associated with ground launched rockets,” Griffin said.

The announcement comes just months after the final space shuttle flight, and a few weeks before the first privately built spaceship docks with the International Space Station. The plane will be built in a Stratolaunch hangar, which will soon be under construction at the Mojave Air and Space Port, the company said.

The aircraft’s ambitious dimensions will likely invite comparison to another secretive wealthy aerospace enthusiast, Howard Hughes, who built the Spruce Goose. That airplane only flew once and is now on display in Oregon. Here’s hoping Allen’s effort fares a little better.