After two failed attempts, Boeing’s Starliner will try again this week to reach the ISS

Boeing’s Starliner spacecraft has yet to make it to the International Space Station, but experts are optimistic about the third test flight. 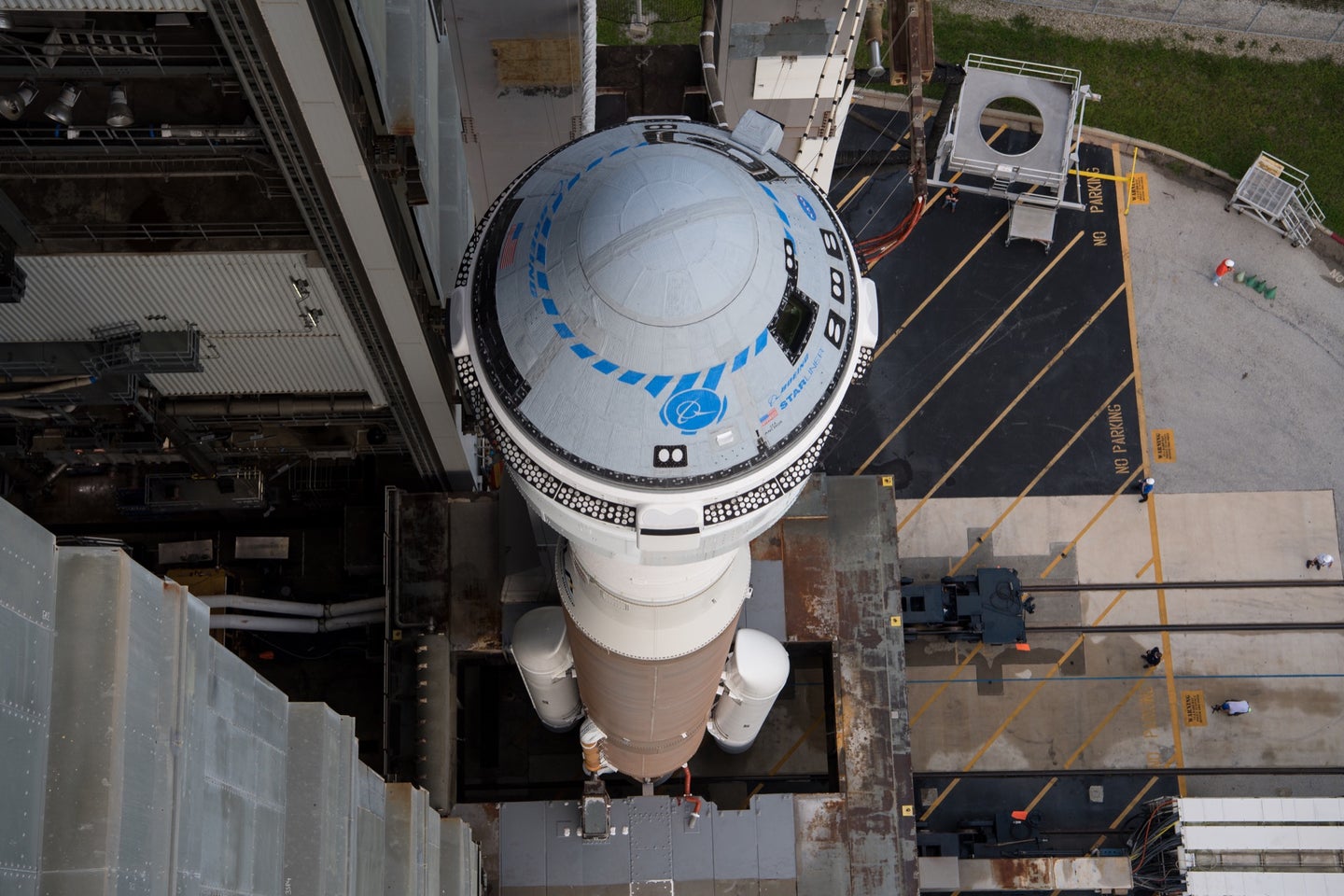 Updated (May 26, 2022): Yesterday evening, Boeing’s CST-100 Starliner spacecraft safely parachuted down in the New Mexico desert, completing the second uncrewed Orbital Flight Test-2 to the International Space Station. NASA and Boeing were able to hit the planned test objectives, such as launch and orbital trajectory, separation from the Atlas V rocket, and docking and undocking from the space station. Boeing has retrieved the spacecraft from the landing site and it is being transported back to processing facilities.

As the saying goes: If at first you don’t succeed, try, try again.

The trip will test the spacecraft’s ability to get to and from the ISS safely—which will be a major feat after past tests encountered a slew of technical complications Boeing has experienced since the project’s inception. The craft will fly out of Earth’s atmosphere on a United Launch Alliance (ULA) Atlas V N22 rocket from Cape Canaveral Space Force Station in Florida, carrying with it more than 500 pounds of cargo up to the station, more than half of which consist of food and supplies for the current crew. After spending about a week docked there, it will return with about 600 pounds of crew supplies, including three Nitrogen Oxygen Recharge System (NORS) tanks that provide breathable air to crew.

However, one of the reasons the test is so risky is because Boeing has yet to really  prove that their technology can go the distance.

Since the Space Shuttle program was shut down in 2011, the US has been reliant on Russia’s Soyuz spacecraft to ferry astronauts to and from the International Space Station. Astronaut Mark Vande Hei, who returned in March, was the latest to touch down in one of Russia’s rockets. But NASA is aiming to expand its options to deliver human payloads into space. That’s why NASA’s Commercial Crew program originally tapped both SpaceX and Boeing to build and operate spacecraft that could carry crew and supplies to the ISS.

SpaceX’s Dragon spacecraft successfully launched its maiden crewed flight in November 2020. Now Boeing is next up on the test pad. If Boeing’s test on Thursday is successful, Starliner could eventually become the second vehicle to be used as an alternative service and supply missions for private and commercial flights. But in the past few years, the company has experienced more than a few ups-and-downs in trying to perfect the spacecraft.

[Related: SpaceX and Boeing are one big step closer to launching astronauts into space]

The first Starliner OFT mission flew in December 2019. The craft did reach orbit, software errors prevented the thrusters from firing, which catapulted the craft away from the trajectory needed to rendezvous with the ISS. Although experts on NASA’s safety panel expected the glitches to lead to a “catastrophic spacecraft failure,” the craft instead landed back on Earth intact two days later. Even though it didn’t complete its original mission, Starliner’s first successful landing will help pave the way for future missions to make similar touchdowns  After receiving permission from NASA to do the test again, its successor, OFT-2 was rescheduled for August 2021.

But the first iteration of OFT-2 never left the launchpad. The mission was scrubbed once again after 13 of the craft’s valves, which are used to transport key propellant needed for flight, failed to open as designed as they were stuck in the wrong alignment. Because the problem couldn’t be diagnosed or fixed onsite, the craft was sent back to Boeing’s factory at Kennedy Space Center for more in-depth testing.

These false starts aside, NASA and Boeing experts alike have high hopes for the company’s third test.

During a NASA pre-launch press conference on May 17, Mark Nappi, vice president and program manager for the Boeing Commercial Crew Program, said that (pending good weather) pre-flight checks signal that all systems look good to go. “We did one last cycle of all the valves yesterday, and they all operate nominally so we’re in good shape,” he said. “There’s really no outstanding issues and we’re ready for roll on Wednesday morning.”

[Related: This is why rocket launches always get delayed]

During the same conference, when asked whether Russian cosmonauts would someday be invited to travel back and forth via the American service spacecrafts, Dana Weigel, deputy manager of NASA’s International Space Station program, said the agency welcomes the opportunity to shuttle space crew members from around the world.

“It’s our goal to have what we call integrated crew, meaning we have Russian crew flying on our US group vehicles, and we’d like to fly our crew members on the Soyuz vehicle,” said Weigel. But before that happens, “with newly flying spacecraft, the Russians would like to make sure we’re finished testing, certifying and demonstrating that capability.”

Starliner was also created to be completely autonomous, a move that greatly reduces the training time needed for a potential crew. But for now, Boeing’s uncrewed spacecraft will be monitored by astronauts after it docks at the ISS. Once it reaches the station, the crew will send a few commands to Starliner to see if it responds as expected, and then send that data back to mission control on Earth.

The information NASA will receive about its capabilities could mean the difference between Boeing’s long-awaited success, or in a fourth bid, another year of long-winded tests and inspections. Here’s hoping the third time’s the charm.