Is a hot dog a sandwich? The Apollo 13 astronauts had some thoughts

The ubiquitous American food flew aboard quite a number of missions 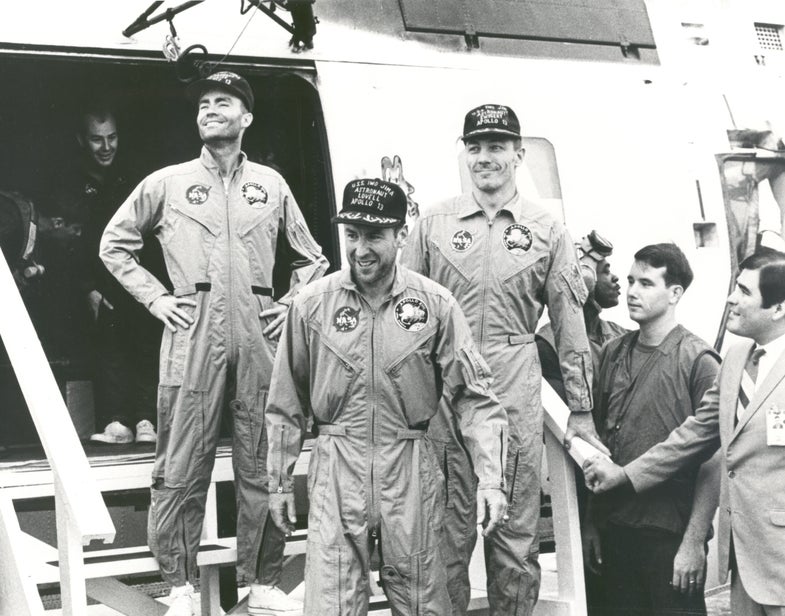 The crew of the Apollo 13 mission step aboard the U.S.S. Iwo Jima, prime recovery ship for the mission, following splashdown and recovery operations in the South Pacific. Exiting the helicopter, which made the pick-up some four miles from the Iwo Jima are (from left) astronauts Fred. W. Haise, Jr., lunar module pilot; James A. Lovell Jr., commander; and John L. Swigert Jr., command module pilot. The Apollo 13 spacecraft splashed down at 12:07:44 pm CST on April 17, 1970. NASA/ Headquarters
SHARE

Forty-eight years ago today, a Saturn V rocket lifted off from the Kennedy Space Center, sending astronauts Jim Lovell, Jack Swigert, and Fred Haise into space on NASA’s Apollo 13 mission. You might have heard of it. It would, of course, go on to become one of the greatest triumphs of the United States’ space program, with the safe return of the crew after a catastrophic explosion hobbled their spacecraft and derailed their plans to land on the moon.

What you might not know about the historic mission was the involvement of one of America’s most iconic foods: the hot dog. See the following excerpt of the official transcript from the second day of the mission.

Yes, it has gone down in the record books that Lovell determined his hot dog to be a sandwich (likely eaten on a slice or slices of specially treated bread) and that the preferred condiment of choice is ketchup, despite NASA’s stated preference for mustard. The hot dogs would make another appearance in the transcript several days later, after the explosion, when temperatures inside the spacecraft had plummeted.

Lovell might have been joking about the refrigerator, but according to the book Apollo 13, co-written by the astronaut himself, the crew actually got quite a kick out of the frozen hot dogs, bouncing them off the walls of the cockpit. The question is, how did hot dogs become space food?

During Project Mercury, scientists didn’t know if it was possible for humans to eat in space, as researchers thought gravity played a role in the digestive process. Though the early missions were short enough that the astronauts didn’t need to eat on their flights, the Mercury Seven performed tests that proved humans could safely consume both liquid and solid foods in microgravity. Their menu, however, was limited to rather unpalatable gelatin-coated food cubes, freeze-dried items, and paste squeezed from tubes.

By Gemini, scientists had improved space food substantially in taste and texture, but it was still freeze-dried or dehydrated, there wasn’t great diversity in options. One Gemini astronaut even snuck a corned beef sandwich onboard a mission, instigating a Congressional hearing on the incident, and leading to a crackdown on crumbs that continues to this day, with astronauts limited to carbs that tend not to crumble.

During the Apollo era, the menu changed significantly, thanks to the invention of “wetpacks.” These pull-tab cans held food that remained hydrated—that is, the food mostly kept the texture of its state on earth, which satisfied the astronauts’ psychophysiological food needs better than the freeze-dried alternatives. For preservation, this “wet” food underwent a process called thermostabilization, in which the food is heated to kill bacteria and pathogens, making it less likely to spoil. NASA records show that thermostabilized frankfurters were indeed on the Apollo menu, making their debut on Apollo 11, as were bacon squares, lobster bisque, and brownies.

Unlike astronauts on Mercury and Gemini missions, Apollo astronauts were able to reheat some of their food, using a hot-water gun to rehydrate items and warm them up. But they didn’t have a galley with a kind of hot plate that became available to to Skylab, space shuttle, and ISS astronauts, meaning some of their meals were taken at room temperature—this likely included the hot dogs, since they were already hydrated.

By the time of the space shuttle program, menus were expanded to include 74 food items and 20 beverages. And yes, according to records, hot dogs did fly on the shuttle, too. Astronauts on Skylab even had access to a refrigerator and freezer, allowing them to enjoy frozen foods like ice cream and prime rib. Today’s astronauts don’t have quite the same amenities, but they do have a much larger menu.

“These days, all food that goes up to the station in advance must have a shelf life of 18 months because the [International Space Station] missions last about six months,” says Stephanie Schierholz, NASA Lead Spokesperson and Public Affairs Specialist for Human Spaceflight. Sadly, hot dogs are no longer part of the standard ISS menu, which offers some 200 foods and beverages, but that doesn’t mean astronauts can’t make a special request for them. “Astronauts work closely with nutritionists before their flights, and they can request certain foods that they like” says Space Center Houston guide Brenda Boykins, a 17-year NASA veteran.

There’s also an exception to the 18-month rule: on cargo resupply missions, fresh food (typically fruit and vegetables) is flown up to the ISS. Sometimes those missions also carry special treats for the astronauts, like ice cream or pizza—the first pizza party in space happened last year, after Italian astronaut Paolo Nespoli mentioned his craving for the food. So if an astronaut wanted a semi-fresh hot dog delivered to the ISS today, it’s certainly within the realm of possibility. “You probably couldn’t have the bun today, though,” says Boykins. “No crumbs allowed in space!”