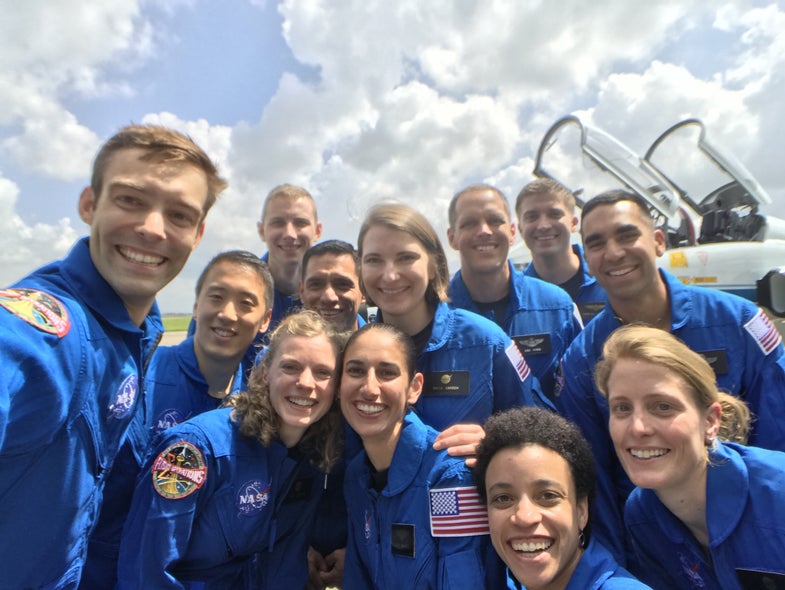 Being an astronaut: it’s the dream job of your childhood. And for a few lucky—not to mention highly qualified—Americans, that dream just become reality. On Wednesday, NASA announced the selection of dozen new astronauts from a press conference at the Johnson Space Center. NASA’s 22nd class of astronauts, who will boldly go where very few have gone before, were welcomed by acting NASA Administrator Robert Lightfoot, Johnson Center Director Ellen Ochoa, and Flight Operations Director Brian Kelly, along with special guest Vice President Mike Pence.

The new astronaut class is composed of five women and seven men, ranging in age from 29 to 42 years old. They call 10 different states home, and include academics, doctors, members of the armed forces, and even a former commercial fisherman and ice driller. The one thing they all have in common? Their list of accomplishments—whether in the academic world, military service, or the professional sphere—are stellar.

“While we want everyone to get to know them as individuals,” Ochoa said, “we also want to emphasize that successful human space flight is a team sport.”

The full list of astronaut candidates is as follows:

Members of the astronaut class of 2017 were notified of their acceptance to the program on May 25, and have had to keep the news a secret since then, telling only their families. On the day of the notifications, they were told to await a phone call (although some, like Hines who works at Johnson Space Center, received alternate notifications—he was surprised in-person by astronaut office chief Chris Cassidy, who showed up to one of his flights.)

This is a historic class in its own right: they were chosen from a record-shattering pool of 18,353 applications. That means that the likelihood of being selected was roughly 0.05%—talk about selective. The most recent class, announced in 2013, drew from a comparatively minuscule pool of 6,000 applicants, and the record up until now was 8,000 applicants in 1978. The applications poured in from all 50 U.S. states, the District of Columbia, Puerto Rico, Guam, and American Samoa during the two month submission period.

According to Johnson Space Center spokeswoman Brandi Dean, NASA is not entirely sure why there was such a sharp spike in applications this year. But she notes that the application was easier to complete than in previous selection rounds—it was entirely online—and that there has been a lot of support for NASA due to popular space-themed books and movies. “A lot of people are really excited about sending humans farther than we’ve ever been,” Dean told PopSci.

The new astronauts shared this excitement from a young age. O’Hara recalled going to school near Johnson Space Center and growing tomatoes in her 2nd grade class from seeds that had flown on a space shuttle during Wednesday’s press conference. “Those early experiences really hooked me and ignited my dreams to be an astronaut,” she said. Moghbeli knew she wanted to be an astronaut as soon as she did a project on Russian cosmonaut Valentina Tereshkova in sixth grade. “I’ve learned more about [being an astronaut] in the process, but it’s made me want it even more,” she said on Wednesday.

Vice President Pence, who also professed that he had “caught space fever” as a child, emphasized that America would once again lead in space. He announced that he would be chairing the resurrected National Space Council.

“Our National Space Council will re-energize the pioneering spirit of America in space,” Pence said. Addressing the new astronauts, he added, “You are heroes, you’re the patriots, the trailblazers in the best American tradition.”

Looking for a job that could take you to new heights?

Even if you missed the boat—or rocket—this time around, keep an eye out for the next round of astronaut applications. NASA has been regularly soliciting applications from aspiring astronauts since 1959, when the “Mercury Seven” became the original American astronauts. Since then, the incoming classes have drawn from a variety of qualifications and backgrounds, becoming increasingly diverse; the outpouring of applications in 1978 resulted in the first class with female, African American, and Asian American astronauts. The 2017 class has a lot to live up to: the 2013 class featured NASA’s first 50-50 gender split.

So, what does it take to get one of the best jobs in the galaxy? The basic requirements are actually pretty simple:

There’s also a NASA astronaut physical to ensure that your body can withstand the intense conditions of space travel.

But even once your application passes these relatively simple initial barriers, there’s still a long way to go to get from 18,000 applications to fewer than a dozen astronauts. The Astronaut Rating Panel, primarily composed of current astronauts, narrows down the pool to a few hundred applications that they deem to be qualified for the job. These applications are passed on to the Astronaut Selection Board, which then invites the top 120 candidates to the Johnson Space Center for interviews. This group gets trimmed down to 50 finalists who are invited for a second interview, and from this final pool, the newest class of astronauts is chosen.

That’s just the beginning, though. Their jobs officially start when they are sworn in at Johnson Space Center in August, their space suits ready and waiting. They will then embark upon a two-year training program that readies them for the mental and physical challenges of a cosmic career. Some of the training protocols are straight out of your imagination—preparing for zero gravity conditions, practicing spacewalks in a swimming pool, learning to operate the docking mechanisms on the International Space Station—but others include survival training, learning to fly NASA’s T-38 supersonic jet trainers, and even learning Russian.

The group announced today will start out working at Johnson Space Center, but their commute will eventually become a bit longer when they are assigned to the staff of the International Space Station, NASA’s Orion exploration mission, or a commercial crew spacecraft.

In a welcome video from current and previous astronauts, International Space Station Expedition 52 Flight Engineer Jack Fischer said: “Your job is to take the wonder and amazement that we get to see every day, and share it with the world, and ignite their passion to explore it too.” It’s an ambitious goal, but these 12 women and men seem up to the task.