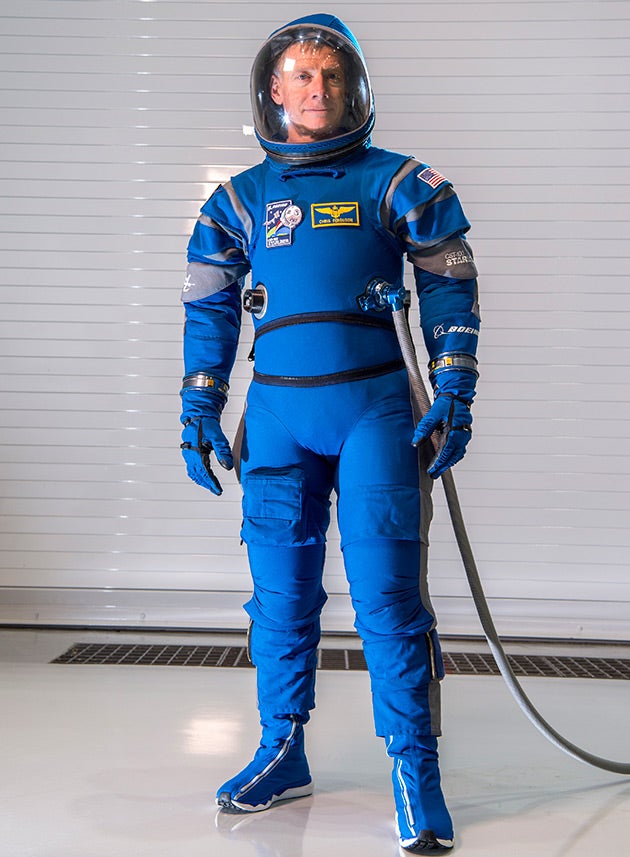 Some day soon, private companies are expected to take over the task of carrying astronauts to and from the International Space Station. SpaceX and Boeing are leading the pack, with their first crewed flights slated to take off in 2018.

Boeing’s Starliner and SpaceX’s Crew Dragon will come with their own matching outfits, and Boeing just unveiled its new spacesuit.

The “Boeing Blue” suit is intended to keep astronauts safe when they launch to the ISS and return to Earth inside a Boeing capsule. If something goes wrong during launch or re-entry, the pressurized suit can provide a backup life-support system for each astronaut. Astronauts will still use NASA’s heavy-duty spacesuit when they go on spacewalks outside of the ISS.

Boeing’s suit and its accessories weigh about 20 pounds, which is almost 10 pounds lighter than NASA’s most recent launch suit. To help astronauts stay cool, special layers allow water, but not air, to leave the suit. Zippers around the joints provide more flexibility, while touchscreen-friendly gloves help the astronauts operate the Starliner’s control panels. The shoe is specially designed by Reebok, and looks more like a running shoe than NASA’s clunky paratrooper-type boots.

It certainly looks a lot less bulky than NASA’s Advanced Crew Escape Suit (ACES), which was used from 1994 until the space shuttle was retired in 2011. NASA may use a modified version of the ACES suit to send astronauts to an asteroid in the Orion spacecraft in the 2020s.

There’s quite a noticeable difference in colors, here, too. NASA’s glaring “pumpkin suit” is so-colored to help rescue crews find the astronauts in water if there’s an emergency ocean landing. That task may not be so easy in Boeing Blue, although the color is admittedly still very distinct (and a little easier on the eyeballs).

SpaceX hasn’t yet revealed its own spacesuit design, but we have good reason to believe it will be badass.