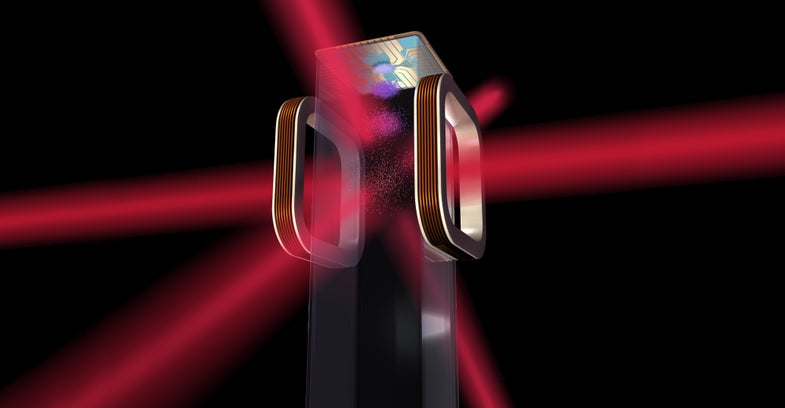 Beyond the bounds of our planet, the record for the coldest temperature is currently held by the Boomerang Nebula, a swiftly moving chill cloud of dust and gas that stays at a cool one degree Kelvin, or –458°F. Down here on the ground, physicists manage to surpass that. In 2003, chilling a gas to a mere 500 picoKelvin or –459.6699999991°F.

An upcoming experiment, the Cold Atom Laboratory (CAL), which just launched to the International Space Station (ISS) on Monday, May 21 aboard a Cygnus spacecraft plans to cool a gas down to even lower temperatures, ahd maintain those low temperatures for much longer times than could be achieved on Earth. Researchers hope that once it’s safely installed on the station, it will cool clouds of gas down to a stunning 0.0000000001 degree Kelvin (100 picoKelvin). That’s around -459.6699999982 degrees Fahrenheit. That temperature has previously only been reached in the nuclei of rhodium atoms in 2000.

Just for comparison, the background temperature of space is -455 degrees Fahrenheit, meaning that inside this box, temperatures will be much colder than the vacuum of deep space.

The Cold Atom Lab isn’t in it for the record though. It’s studying Bose-Einstein condensates, or clouds of atoms that have been cooled to near absolute zero, -459.67°F. Bose-Einstein condensates were predicted by the work of Satyendra Nath Bose and Albert Einstein in the early 20th century, but this state of matter was not proven to exist until 1995, a discovery that was awarded a Nobel Prize in 2001.

The experiment will be operated remotely by physicists still on Earth, not astronauts aboard the station, and researchers will get about 6.5 hours per day to work on the experiment. So far seven proposals have received funding from NASA to conduct fundamental physics work using the Cold Atom Laboratory. The Lab will operate on the station for at least three years and its lifetime could be extended after that, depending on how everything works out.

This is fundamental physics work, so practical applications of discoveries made in the CAL are far in the future, and still unknown.

The experiment was originally set to launch in 2016, then August 2017 before finally making it into orbit after Monday’s pre-dawn launch. The Cygnus capsule is scheduled to arrive at the space station on May 24. In addition to the CAL there are a lot of other science experiments on board, including a DNA and RNA sequencer, E. coli that will be used to produce isobutane—a manufacturing compound—and several others. Also on board will be a sextant, a device that was once used to help ocean navigators find their way. Astronauts on the ISS will test the sextant’s ability to help them navigate in space, a skill that could be life-saving on future crewed missions to destinations in our solar system beyond the Earth-Moon System.