A colorful look at how America's obsession with space travel led to rocket-shaped vehicles, parabola-shaped buildings, and swiveling television sets 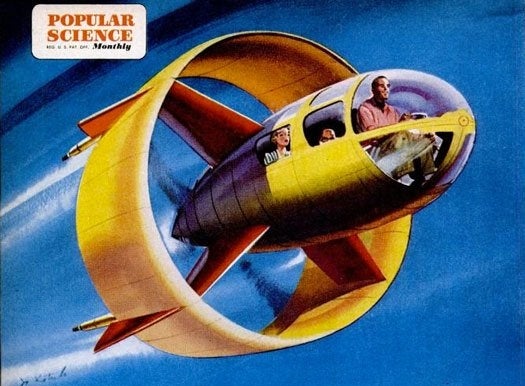 During the 1950s, architecture, cars, and gadget design took on a curiously spaceflight-inspired aesthetic. Manufacturers built vehicles with ornamental tailfins. Upswept roofs and parabolas cropped up on buildings. Logos incorporated starbursts and satellite shapes, while parallelograms, wings, and free-form boomerangs became the motel sign shapes du jour. In retrospect, those designs look a little gimmicky, but they nonetheless reflect a collective 1950s confidence about America’s dazzling future as a leader in space flight and economic prosperity.

While historians generally date the Space Age back to Sputnik’s launch in 1957, our captivation with space travel began much earlier. Comic books, TV programs, and furniture borrowed components from science fiction, while businesses lured customers by incorporating futuristic elements in their buildings. The trendiness of the aesthetic both stimulated and exploited our enthusiasm for the future, culminating into a quick turnover for consumer products and a greater movement toward materialism.

Plenty of Space Age buildings might have already been demolished (because let’s face it, populuxe hasn’t aged very well), but it’s almost impossible to avoid the so-called Googie motif in our archives. How could we not cover the era with gusto, being a science magazine and all? Our gallery begins in 1951, where we published the dream car designs of Ford employees. All looked as if they were half-rocket, half car; unfortunately, none made it to the production line. On a happier note, swivel-mounted television sets gave living rooms a Jetsons-like quality, oval picturephones debuted in New York, and esteemed Googie architect John Lautner built his octagonal Chemosphere above the San Fernando Valley.

In spite of our optimism, we knew it could be awhile before commercial space flight became available. But no matter. We had plenty of saucer-shaped buildings and domed cars to tide us over.

Although modern historians consider Sputnik’s launch in 1957 as the start of the Space Age, its aesthetic can be traced back to at least a decade earlier, when rocket ships, spaceflight and nuclear energy entered the public consciousness. These dream cars designed by Ford’s Advanced Styling Studio were never produced, but they include several of the era’s most distinctive design characteristics: tailfins, sleek silhouettes, curved edges, and a hood that could probably impale you. We predicted that fender curves and radiators grills would make their way into vehicle production lines later in the decade and in the 1960s.

The coleopter might not have been intended for spaceflight, but this colorful concept from a group of French-German researchers reflects a distinctly 1950s optimism about the future of space exploration. Instead of using wings, the coleopter employed a circular extension serving as the outer part of the jet engine while helping the aircraft achieve level flight, as well as vertical ascent and landing. During takeoff, the coleopter would rise straight up like a rocket before alighting itself for cruise mode. To land, it would reposition itself vertically again.

Researchers came up with four models that could be used for either leisure or combat: A guided missle (called “the Ogre”), a pilotless interceptor, a light ground-attack plane, and a three-seat private private, pictured left.

Ah, the television set of the future. This Philco 1958 model, which boasted a portable picture tube, looks like something straight out of The Jetsons. Aside from its appearance, what made this set so novel was that it wasn’t restrained in a cabinet.

For several years, manufacturers struggled in vain to convince the public to buy new models, but consumers couldn’t find any reason to part with their perfectly functional television sets. That is until company designers realized that they needed to revamp the TV’s appearance in order to further consumption and innovation. Philco emerged as the market winner after successfully shrinking the cathode ray tube enough so that it could be accommodated in a 21-inch TV set. This model was not only portable (it even came with a handle), but it did away with the outdated-looking “rabbit ear” antennas. Unlike the bulky cabinet models, this set could be placed anywhere in the room to allow for optimal viewing angles.

While the suits of these factory workers don’t conform to the populuxe aesthetic so integral to the Space Age, their suits bear a tremendous resemblance to a late 1950s space suit design; in fact, we acknowledged their similarity in the article’s title, which proclaimed that workers would wear space suits in a new gas-filled factor (which might as well have been a hostile planet). In the new $3 million “In-Fab” plant, an argon gas atmosphere would protect refractory metals like molybdenum from being damaged by oxygen during the fabrication process. In fact, the argon would be so thick that if a light bulb inside the room were to break, the filament would keep glowing. Clearly, working in the metal mill was a dangerous venture. “Should a lifeline break, a man might live a minute or two–as helpless as if he were out in space or under water without an oxygen supply.”

Evidently, the future looks a lot like a 1950s suburban utopia, and Space Age architecture, also called “Googie style,” is exemplified in this design commissioned by the Boys’ Club of America. This was no ordinary clubhouse. It was “Boy-Topia,” an extravagant playground for future generations who would play with radar, solar energy, atomic batteries, and spacecraft engines. The design called for an aircraft work area and shops, television and radar labs, a football stadium with a foldable plastic roof, and an observation tower, among other traditional facilities. We can only wonder if designers Griswold, Heckel and Keiser Associates would be disappointed that today’s children are too preoccupied with video games to tinker with radar and aircraft.

John Lautner, one of the most eminent Googie architects, built the Chemosphere in Los Angeles to show how it was possible to erect a home in an otherwise uninhabitable slope off Mulholland Drive. The massive octagonal structure contains 10 rooms, 2 baths, and is accessible only by a funicular. Since it is built on an incline, the entire structure is supported by 30-foot concrete pole supported by an underground concrete pedestal. The house has inspired sets on several sci-fi films and TV shows, such as Charlie’s Angels and Lost in Space, and it is also considered a Los Angeles historic-cultural monument.

DeVry advertisements have come a long way, although to be honest, we wouldn’t object if they reincorporated space imagery into their campaigns. Like a space shuttle, DeVry could tranport “men who want to get somewhere and be somebody” to exciting new worlds.

The videophone is one of the most iconic retro-future technologies, having appeared in classic science fiction movies and TV programs, like Metropolis, 2001: A Space Odyssey, and of course, The Jetsons. AT&T; introduced their Picturephone during the 1964 New York World’s Fair, giving fair-goers (like the PopSci editor pictured left) the opportunity to make calls on the oval-shaped device. Later that year, AT&T; installed their first commercial videophone unit, the Picturephone Mod I, in public booths around the country, but the expense of making a call curbed the technology’s popularity.

Commuting can be a miserable chore, and city planners could only expect it to get worse as cities became more congested. That’s why they conceived the Urbmobile, a vehicle that combines driving to work with rapid transit. Simply dial a code into your phone and wait for the driverless car to arrive at a nearby station. Select your destination, turn on the television, and let the Urbmobile do the rest. Sometimes you’ll be on a track (or guideway), other times you’ll turn into a road. While the system would be expensive to implement and maintain, it could potentially keep traffic to a minimum by eliminating the need for extra vehicles, easing up roadside parking, and fulfilling the needs of commuters who enjoy the ease of rapid transit, but would prefer door-to-door transportation. Building it required no technological breakthroughs, just a large budget and the willingness of the public to adjust their travel habits. Cars would be quite safe running at 60 miles per hour on the track, and 40 miles per hour on the street. As a bonus, electric motors would eliminate the need for gasoline, thus preventing additional car pollution.

In addition to shaping architecture, car and gadget design, the Space Age had a profound impact on American pop culture. Although films like The Day the Earth Stood Still, It Came From Outer Space, and Invasion of the Body Snatchers grew a little campy with age, Stanley Kubrick’s 2001: A Space Odyssey, is now considered one of the greatest films every made. Two months after its release, we published a behind-the-scenes feature that examined the film examining how Kubrick used camera work and scientific facts to craft a convincing depiction of space travel. To ensure his film’s scientific accuracy, Kubrick and writer Arthur C. Clark hired consultants from the NASA Voyager program and scientists from the NASA Marshall Space Flight Center. Unlike other films of that era, A Space Odyssey showed outer space as a silent place, rather than as a hotbed of deafening explosions. The inside of spaceships also lacked gravity, while the actual ship design conformed to aerospace engineering rather than a “futuristic” aesthetic.