The mystery of the ISS hole just got even weirder

The hole came from the inside. 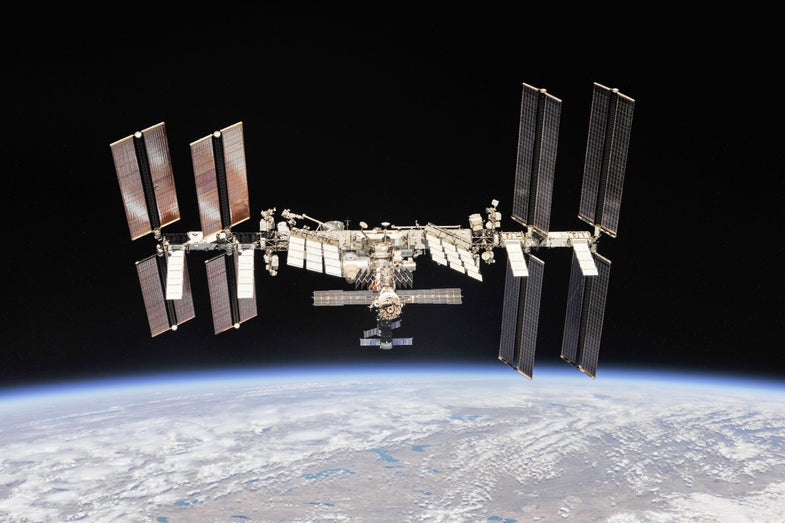 One of the year’s biggest space stories just gets weirder and weirder. Earlier this week, a Russian cosmonaut who investigated the mysterious hole in the Soyuz capsule docked to the International Space Station revealed that the hole was definitely drilled from the inside, according to authorities, underscoring previous suggestions that the hole was not created by any collisions with meteorites or small debris in space—and further deepening the mystery about exactly who or what created the hole.

To recap: NASA was first put on alert in late August, when flight controllers at Johnson Space Center noticed dropping air pressure in the space station (although the crew was never in any real danger). Astronauts quickly found the leak was coming from a two-millimeter-wide hole in a Russian Soyuz capsule docked to the ISS, which had just brought three astronauts to the space station in June. The crew plugged the hole with epoxy and gauze, which effectively solved the leak, but everyone remained flummoxed as to how it got there in the first place—by all indications, the hole probably wasn’t created by an impact with space junk or micrometeoroids, which left open the possibility it was created by a human.

Dmitry Olegovich Rogozin, head of Russian space agency Roscosmos, stoked theories of sabotage by saying the hole might have been created deliberately, either by someone on Earth or by a crew member aboard the space station. (Russian authorities quickly backtracked on those suggestions afterward, but the damage to Russia and U.S. space relations was already done.)

On December 11, Russian cosmonauts Sergei Prokopyev and Oleg Kononenko went on an eight-hour spacewalk to investigate the hole, cutting into the Soyuz capsule with knives and excising a 10-inch sample to send back to Earth for study.

We now have some new details about that investigation. Prokopyev told media on Monday that the hole in the Soyuz capsule started from the interior, which doubles down on the notion that it had to have been created by a human, whether accidentally or on purpose. It’s still possible the incident occurred in space (a Russian politician even suggested earlier that an astronaut may have created the hole in a rather outlandish effort to come home early). Still, the idea of an astronaut intentionally boring into the Soyuz capsule remains a farfetched idea—it’s extremely hard to drill holes in microgravity, and it’s difficult to imagine an astronaut trudging through the close quarters of the ISS with a drill in hand, off the books. Prokopyev himself explicitly brushed off theories that the hole was made by astronauts aboard the ISS, saying “you shouldn’t think so badly of our crew.”

Much more likely (and worrisome) is that an engineer created the hole while the Soyuz capsule was on the ground. Someone may have damaged the spacecraft during its production, or during maintenance and repairs, and simply neglected to notice and report the problem. Or they may have covered the hole up using some kind of sealant that fell off in orbit.

That sort of mistake seems much more realistic than malicious sabotage, but it would also raise concerns about the procedures Roscosmos and its partners use to ensure the Soyuz spacecraft will not jeopardize the safety of crew members using it to go into space or return to Earth. The Space Shuttle Columbia and Challenger disasters are good reminders that even the smallest problem with a spacecraft can lead to catastrophe during spaceflight. If it turns out someone on the ground was truly responsible for the hole, it could lead to a pretty scrutinizing audit of Roscosmos’ safety check protocols, and raise concerns from international partners who regularly participate in Soyuz launches.

Neither NASA nor Roscosmos responded to requests for comment. We’ll have more details for you as the investigation unfolds.