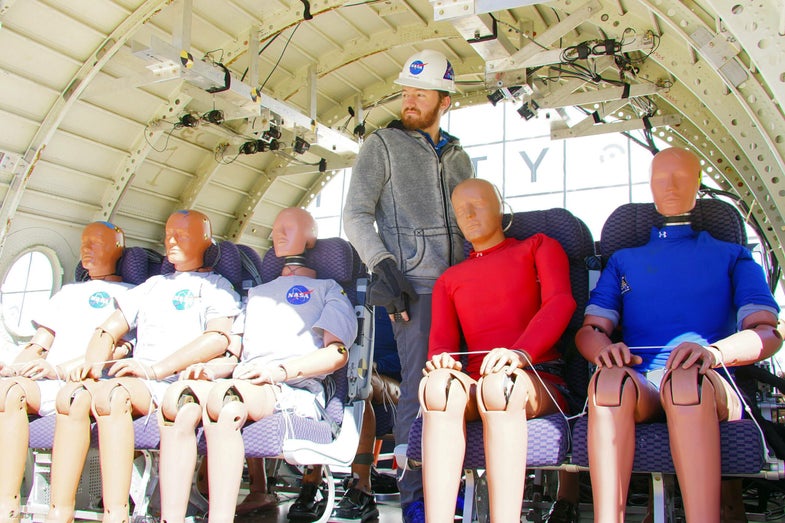 At NASA’s Langley Research Center, engineers put aircraft through what they call “severe but survivable” crashes. They can drop a section of an airplane straight down, swing a small plane into the ground, crash a helicopter fuselage, or let a test version of a space capsule—a part of the Orion spacecraft—plunge into a 20-foot-deep pool. Inside those doomed crafts are crash-test dummies, wired with sensors to measure how the forces of impact translate into human injury.

In doing these tests, the space agency wants to understand “how the airframes behave in a crash environment—how they collapse, the damage that occurs, [and] how much load is transferred into the occupants,” says Martin Annett, a structural impact dynamics engineer at the facility. They’ll drop the test vehicles from as high as 80 feet.

The dummy passengers are made of rubber, plastic, and metal in the shape of humans. Each one contains sensors that measure variables like g-forces, how much the head and neck move or twist in a crash, and compression of the lower back. The sensors include accelerometers, as well as “load cells” that detect spinal compression. While the dummies have arms and legs, their hands and feet don’t contain sensors. Instead, the measuring instruments are in locations like the pelvis and neck. The setup is similar to crash-test dummies in cars, but different forces require tweaks to the arrangement. For instance, compression forces in the lower back are more important when studying plane crashes, thanks to those hard vertical hits into the terrain below.

The forces that cause injury happen fast. The key data that Annett is interested in is generated in a micro-moment after impact—the first 0.1 to 0.4 of a second. And all that data needs to make its way off the aircraft for analysis.

“We’ll have a whole run of cables coming out of each of those dummies,” Annett says. “We bundle those together and then we tie them together into a data acquisition system.” That rugged, battery-powered data gathering node is located near the dummies, onboard the crash-ready crafts. The engineers will then download all the valuable data from that onboard system to a laptop for analysis after it has had its rough rendezvous with the ground.

Two factors that can influence the likelihood of injury are the velocity before impact and the time over which that impact occurs “The change in the velocity is really what gives you your g’s,” he says. The goal is to “prevent a very high-g, short-duration loading.” Those are the wrecks that can cause neck or head injuries.

Striking something inside the cabin is very unkind to your body, too, for obvious reasons—it’s a fast deceleration. Annett recalls a test with dummies representing a pilot and co-pilot. “The pilot was in a restraint that gave way, and it [the dummy] struck the dash,” he says. “The other one had a restraint that held it back.” The g-forces, and thus the injury, were much higher on the dummy with the restraint that released.

While they’ve dropped a cross-section of a regional jet, Annett says they have their eyes on a bigger chunk. “We’d like to crash this full aircraft that we have here, which is about a commuter-sized jet,” he says. “If everything goes well, we may put 30 to 40 crash test dummies in there—we would have a combination of dummies, anywhere from a 3-year-old, to 6-year-old, to small female, to large males.” In other words, a range of dummies that would represent the crowd on a typical commercial flight.

“We can get a wealth of information over one test,” he adds. “We try to populate as much as we can since you really only have one shot.”