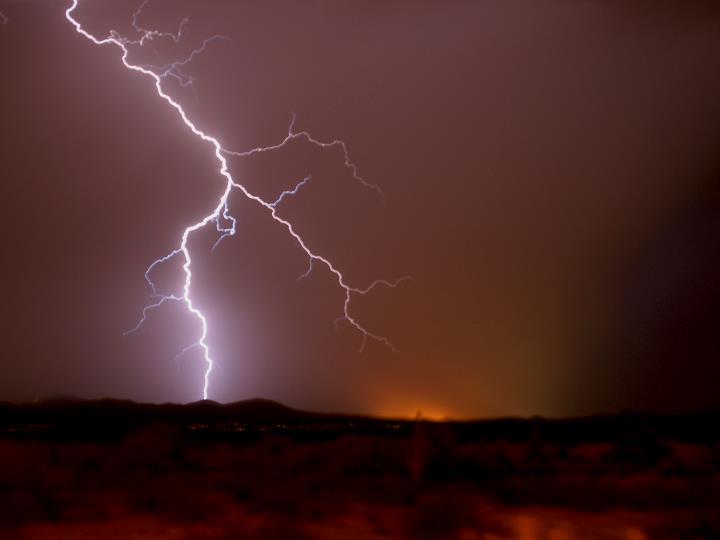 The GLM, currently installed in GOES-17 and its predecessor, GOES-16, was designed and built by Lockheed Martin, which has new footage today, available here first.

This time-lapse shows an hour of activity in a string of storms moving across the country on May 2, with lightning lighting up first the darkened outline of North America (state and national borders are highlighted in blue) and then cloud tops.

Samantha Edgington, chief scientist on the GLM at Lockheed Martin, has worked on the project since it was first proposed to NASA. “It’s been a really amazing experience to go from the proposal, where everything is just powerpoint charts, to actually making hardware, to launching it and seeing that it works on orbit,” she says.

Like most people would, she immediately wondered if the group should head down into a shelter. “They were like, ‘oh, no, I wouldn’t have warned on this’—basically backseat driving the warning,” she laughs. They reassured her that not only was the building safe—equipped with bullet-proof glass—but that the only time to worry would be when the people crewing the forecasting office started heading to the shelters.

“Then, instead of going down to the shelter, they all start going up to the roof to try to find a tornado,” Edgington says. “I declined going up to the roof, but that’s why I told Clem [Tillier, Integration & Test Lead of GLM] we should use May 2, so we could watch the tornado go past Oklahoma.”

You might have heard GOES-17 referred to as GOES-S earlier this year. That’s because geostationary satellites like GOES-17 only get their numerical designation once they reach geostationary orbit, which this satellite did in March. It started getting data back from some of its instruments later that month, starting with the magnetometer, which helps researchers monitor space weather.

To monitor weather closer to the ground using the GLM, scientists had to wait until early on April 12, when their instrument became operational.

That night, scientists with Lockheed Martin gathered at their headquarters in Colorado to watch the instrument warm up, head through its phases, and finally, send back data.

Tewa Kpulun, an electrical engineer on the GLM project, was one of the people in the room that night, anxiously waiting for the data to come in. NOAA headquarters in Maryland got the data first, followed by the team in California 15 minutes later. “We knew, ok, they already have it, now we just have to keep refreshing and see when we have data,” Kpulun says.

The reaction was jubilant when it finally came in, as you can see in the video below. They swiftly zoomed in on a storm in Uruguay, where lightning lit up the map like fireworks. Edgington wasn’t in the room when the first data arrived at 2:02 a.m., but she was on the phone from New York City, following along with the rest of the team.

GOES-17 is still in its testing position, centered more or less over the centerline of the Western Hemisphere. Later this year it will move into position further over the West Coast, where it will look over an area that spans from New Zealand to Canada.

When it’s in place, both GOES-17 and GOES-16 (centered on the east coast) will be able to watch the huge thunderstorms that form across the middle of North America, which will offer a new perspective on those storms. “I’m really excited to see a storm in stereo,” Edgington says.

In addition to enhancing forecasts, the lightning data will help augment large areas across the oceans that aren’t well-covered by radar, helping pilots on transoceanic flights get better data on storms, and allowing them to adjust their flight paths accordingly.

Then there’s the science, and the chance to see brief flickers that would otherwise go unobserved.