After 355 days in space, an American astronaut rides home on a Russian capsule 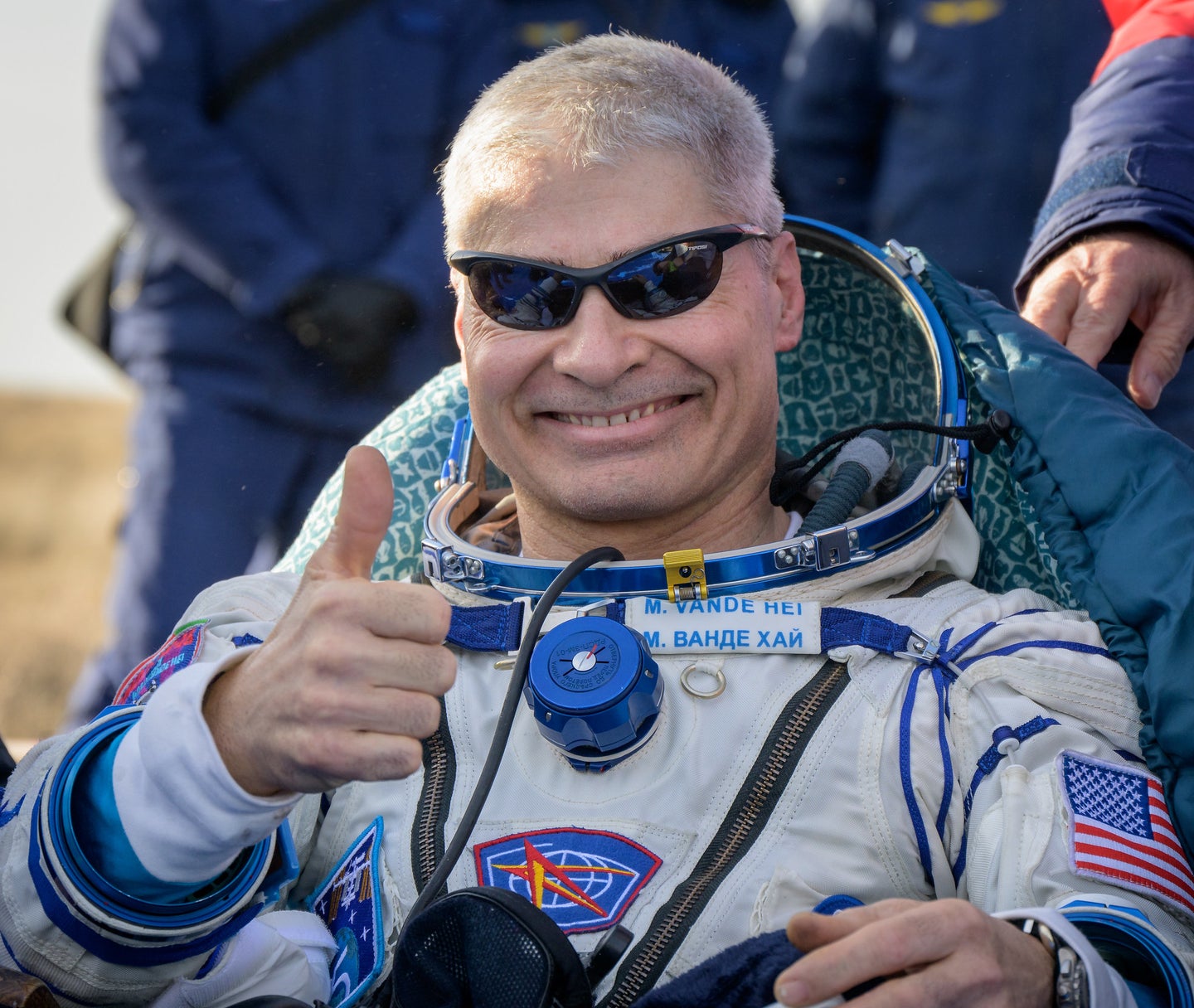 Mark Vande Hei has finally made it home from the International Space Station. Touching down early Wednesday morning aboard a Soyuz MS-19 spacecraft, Vande Hei and two cosmonauts, Pyotr Dubrov and Anton Shkaplerov, were picked up in a remote area southwest of Dzhezkazgan, Kazakhstan.

Back on Earth for the first time in nearly a year, the crew was met with a crowd of international agency officials. With the astronauts adjusting their space legs to Earth’s gravity, they were carried out of the spacecraft into medical tents. Vande Hei was whisked back to Houston, and cosmonauts Dubrov and Shkaplerov went to a training base in Star City Russia.

The Soyuz’s landing was a bit of a rougher ride than expected, Vande Hei had said. The lead up to the astronauts’ return had garnered unprecedented attention due to the recent geopolitical tensions between the US and Russia. Many were even concerned about Vande Hei hitching a ride back on a Russian-operated spacecraft.

“Each of the partners have different capabilities that they bring and together we work,“ said ISS program manager Joel Montalbano, in a press briefing on March 14. “It’s not a process where one group can separate from the other.”

Russia’s Soyuz crafts have been used to ferry cosmonauts to and from the International Space Station for decades. Before SpaceX’s Dragon rockets transported NASA crew up in 2020, the Russian-made vehicles were the only method of delivering and removing crew.

But the safe landing early this morning indicates that there wasn’t anything to worry about.

Right before settling into the spacecraft, Vande Hei and many of his colleagues aboard the station hugged goodbye, and took a few pictures to commemorate their farewell. It was especially heart-felt considering Vande Hei has stated in the past that this expedition would be the last time he took to the stars.

[Related: The ISS gets an extension to 2030 to wrap up unfinished business]

During a pre-recorded NASA interview that aired during last night’s livestream, Vande Hei reflected on his time aboard the ISS and the mental rigors of spaceflight:

“Physically, this is a challenging environment to be in,” he said. ”There’s times when you just feel very physically uncomfortable; those are probably the low points. It colors everything you’re doing, and it takes a lot more work to stay in the right frame of mind in those situations.”

To combat those feelings, Vande Hei tried to remain connected to his relationships on the ground, and made a habit of meditating everyday.

“Trying to look for things to be grateful for as opposed to things to gripe about. That goes a long way with making whatever you’re doing more palatable,” he said.

During his time on the station, Vande Hei broke the record for the longest single space flight made by an American astronaut, spending 355 days in orbit—the previous record was held by astronaut Scott Kelly at 340 days. Between his two spaceflights, Vande Hei lived in space for a total of 523 days.

According to NASA, Vande Hei’s mission went around Earth about 5,680 times, and traveled more than 150 million miles.

The three returning crew members were the last of Expedition 66, the 66th long-duration mission to the ISS. Their departure makes way for the next batch of ISS residents.

On Tuesday, former ISS commander Shkaplerov handed over the reins to the station to NASA astronaut Thomas Mashburn by giving a symbolic key during a live change of command ceremony. During the exchange, Shkaplerov remarked: “I know you. You’re professional, and I know you will [be a] very professional commander of ISS.”

After the Soyuz departed, commander Mashburn along with NASA astronauts Raja Chari and Kayla Barron, European Space Agency astronaut Matthias Maurer, and Roscosmos cosmonauts Oleg Artemyev, Denis Matveev, and Sergey Korsakov officially boarded the station. Their arrival marks the start of Expedition 67, which is predicted to last until September of this year.

You can rewatch NASA’s livestream of the event here.