I floated in zero-g with former astronaut Scott Kelly

And no, I did not throw up. 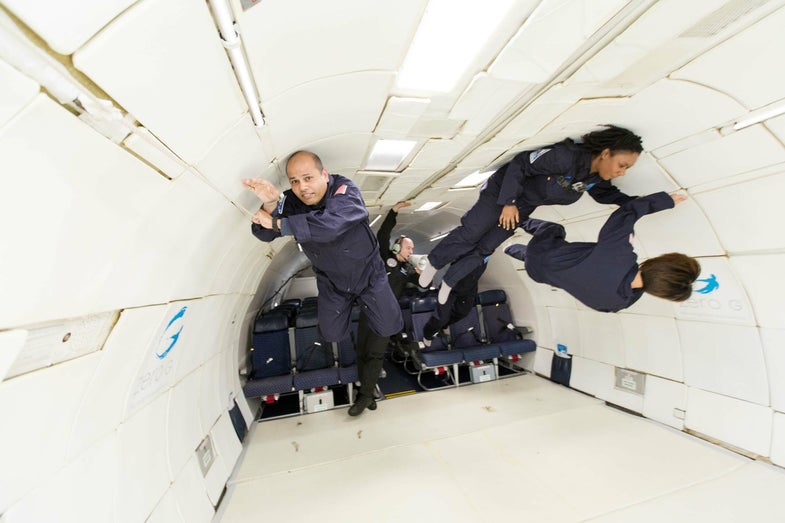 I did not throw up.

When I tell people that I’ve ridden in a zero-g plane, invariably they ask, propriety be damned, if I threw up. So, it’s best to address that aspect of zero-g straight away. Though I dutifully stick the company issued barf bag in my flight suit’s pocket—just in case—my stomach’s contents remain my stomach’s contents through the many 30-to-40 second cycles of less than Earth’s gravity. Five other fliers—all men—are significantly less fortunate.

The vomit question probably traces its origin to the unofficial name for planes like the one I flew in: the vomit comet. Although my flight is run by a company, appropriately called Zero G, it was NASA astronauts who crafted this odious if rhythmic nickname. Before these planes got into the recreation business, they were training facilities. Specifically, facilities that tended to evacuate the stomach contents of NASA trainees, who’d would fly in the airplane to grow accustomed to the sensation of zero-g.

Zero-g is not quite the same thing as zero gravity. Though you might feel like gravity has disappeared, it’s still all around you. The plane’s parabolic trajectory just makes it seem like for a moment gravity has vanished, leaving you weightless and floating.

A zero-g flight is, at least for now, the closest that we can get to the sensation of being in space without being in space, though astronaut Scott Kelly who is aboard my flight tells me that the weightlessness of space and the weightlessness experienced during the plane ride are different. Kelly—whose identical twin brother Mark was also an astronaut—commanded four space flights and spent a year on the International Space Station (ISS), and has plenty of experience with both situations.

“Some people get really sick on the plane,” Kelly tells me, “but they’re fine in space. And some people are fine on the plane but get sick in space.”

“Have you ever thrown up,” I ask. This is maybe the only time I’ll get to ask an astronaut if they’ve thrown up in space without seeming rude.

He had not. At least, not in that situation.

“You want to know when I did throw up?” he asks me. “When I returned to Earth.” His body, having spent so long in space, had grown unaccustomed to Earth’s gravity.

You spend a lot of time pondering gravity when you feel like you’re suddenly stripped of it. In fact, I think part of the reason why I’m so frequently asked about vomiting is because while vomiting is both banal and universal, resting unsupported in mid-air though explained by physics still has a touch of the supernatural. It feels like magic.

The first few times my body lifts from the cabin floor I find myself grasping for anything to hold onto. Despite a clear understanding that it’s gravity—or rather, the seeming absence of it—that’s keeping me afloat, I’m convinced that somehow the air below me will give way, sending me crashing to the ground at an odd angle. This never happens. As the plane changes direction, the gravitational force returns gradually, giving us plenty of time to lay back down on the floor and wait for the next round.

The term zero-g airplane is a bit of a misnomer. The planes are normal planes. The one Zero-G uses is a Boeing 727, while a European company runs similar flights using an Airbus A300. The Airbus dates back to the 1970s, while the 727 was first introduced in the 1960s. For most of that time, aeronautics experts regarded the 727 as something of a workhorse, a fact I found reassuring. Workhorses, unlike racehorses, aren’t flashy. They’re steady, they’re loyal, and they don’t crash. Until 2013, when they swapped it out for newer airplanes, the Boeing 727 helped FedEx fly packages around the world. Those packages unlike the cargo on my flight didn’t float.

Although the Zero G plane is a normal plane, there are some modifications. The most obvious is seating. While a commercial 727-200 can fit up 189 passengers, the Zero G plane can only fit 34 passengers, 38 seats total. The center of the plane up to the cockpit is empty, but for thick, white padding to protect against head bumps and those times when the ceiling becomes the floor. There is no up or down in zero-g. The plane also has no bathroom. As soon as I learn this, I immediately have to pee. Nobody warned me that Zero G would involve so much concern about my bodily fluids.

More subtle modifications include an upgrade to the planes hydraulic system, which planes use to work the flaps, brakes, and thrust reversers among other equipment. Zero G’s plane allows for continuous hydraulic pressure while it performs the maneuvers necessary to achieve zero-g. There are also accelerometers, devices that measure acceleration, in the cockpit that ostensibly don’t get confused when the plane achieves weightlessness.

To achieve zero-g, the pilots fly a series of maneuvers that they call parabolas. It’s a gentle term to describe a maneuver intense enough to awaken even the most latent aviophobia. The pilots, are two guys who would not look out of place at the X-Games or other extreme sports venue. I ask if they can imagine flying commercial they look at me and laugh.

“Can you imagine these guys in a suit saying, ‘yes, sir’,” says Terese Brewster, Zero-G’s president.

A friend who was once a commercial pilot on a regional line told me that she quit because she felt like too much of a bus driver – it wasn’t challenging enough. But orchestrating the maneuvers takes coordination, communication and planning between the two of them. One of the pilots tells me they couldn’t imagine flying commercial because flying Zero G is too much fun. And in a normal flight you don’t get to keep a rubber ducky in the cockpit to see if it floats. Because they’re strapped in, the floating duck is how they confirm they’ve hit weightlessness.

To achieve weightlessness, the pilots point the plane’s nose upward at an angle of 45 degrees until the plane is nearly vertical. During this part of the flight the g-forces acting on our bodies is greater than normal – about 80 percent stronger than the standard gravity that we experience closer to the ground. This 1.8 g experience is strong enough that if I were standing up, not only would it be hard to prance around, but the body’s blood would be pushed downwards, making it more likely that I’d pass out. To avoid this, the crew has us lay on the floor, where I entertain myself by doing the hardest unweighted leg lifts of my life. Not mentioned in the brochure is the sound – it’s very loud. Ordinarily on planes you’re sitting a good distance from the plane’s mechanics. Laying on the floor this way, allows me to hear the plane in a way that is unique.

Once the plane hits the right altitude, they begin the “push over” maneuver, when the plane pivots from moving nearly vertically upwards to moving straight down. Before I begin to float, I can tell we’ve reached this point because the engine goes from very loud hum to a gentle whine, like a puppy begging for a treat. It’s here that for the 20-30 seconds that we enjoy weightlessness, turning summersaults, pushing off of the chairs in a superman maneuver, catching balls of water. A woman, who has come from China to spend three weeks riding America’s rollercoasters says that the flight is the high point of her trip.

The closest thing, sensation wise, on planet Earth to zero-g is swimming. So, fliers tend to default to swimming motions although you can’t push off of air. The habit is so ingrained, in fact, that in training we’re warned not to swim. Shortly after boarding our shoes are taken away and we’re told to put on socks we’ve been given for warmth, and that are color coded to let us know which section of the plane we should stand in. It’s not uncommon for someone to get kicked in the face and it’s better all-around if that happens without shoes.

Saying that swimming is like zero-g, is like saying that cherry flavored candy actually tastes like cherries. The comparison is thin. In water, we have to work to stay afloat, in zero-g you have to grip something—the line strung along the cabin—to avoid collisions or to gain any semblance of control. To guide us into the sensation of zero-g, we do a parabola that mimics Mars gravity, and two that mimic that of the Moon (where I do the easiest push-ups of my adult life), before we do twelve zero-g loops.

The sensation of zero gravity is fun but more than anything the complete cessation of the normal rules of order brings out the anything goes attitudes of childhood. I slam into someone old enough to be my father and he responds with a grin so vast I’ve only seen it on a five-year-old.

When Zero G isn’t shuttling eager adventurers (for the price of $4,950 plus tax), they’re conducting research flights to allow scientists to test experiments. Arguably the coolest was 3D Printing a heart. Music videos, most famously the OK Go, and tv commercials are shot in the Zero G plane too. They redecorate the interior—within FAA limits—to suit their needs.

I ask Terese Brewster, Zero G’s president, if she had to deal with anyone especially difficult, but mum’s the word. Instead, she offers up people who were especially great. Two cast members who flew as part of a promotional video for the television show Baby Daddy.

“You could tell they were just really excited to be here,” says Brewster. That makes three of us.