The leak has been repaired, but its origins remain mysterious. 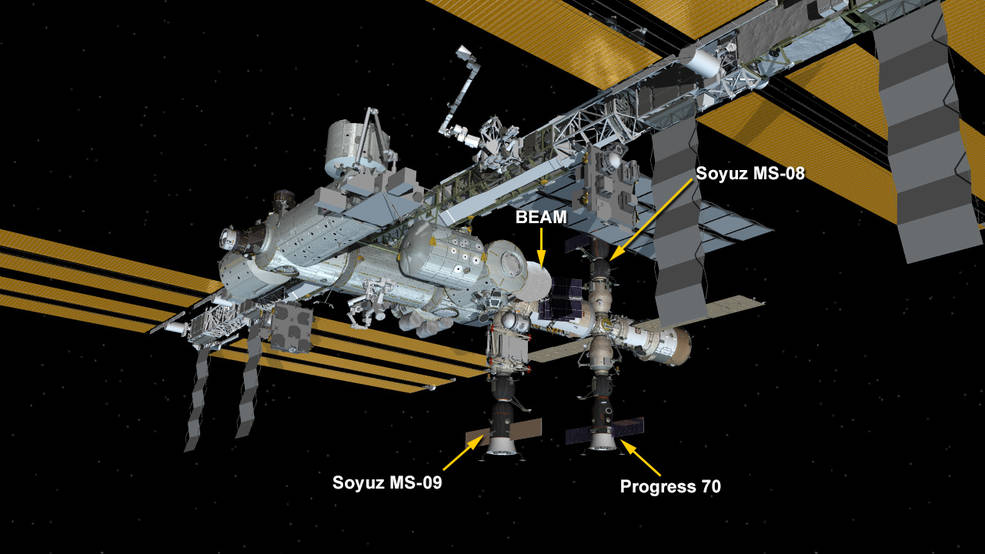 Air slowly seeped out of a hole aboard a Russian vessel connected to the International Space Station last week. Astronauts quickly found and plugged the hole, but its origins are under investigation. The head of Russian space agency Roscosmos has publically raised the possibility that the hole was made by human actions, either on the ground or, more inconceivably, in space. Luckily, the astronauts on board are not in danger. Here’s how this space opera is unfolding:

On Thursday, while the six astronauts on the ISS were asleep, flight controllers at NASA’s Johnson Space Center noticed that the air pressure on the space station had dropped. The difference was tiny, so they didn’t rouse the astronauts from their slumber. But finding the leak was at the top of their to-do list the next morning.

Eventually, the crew found the hole. It was tiny—just two millimeters wide in the orbital module of a Soyuz spaceship docked with the ISS. The ship had just brought three members of the crew up into orbit June. German astronaut Alexander Gerst covered the hole with his finger briefly before the team applied some heavy duty tape (Kapton tape, not duct tape). Eventually, Soyuz commander Sergey Prokopyev used epoxy and a gauze wipe to plug the hole more completely.

The astronauts were never in any danger, and the area where the hole was found was part of the spaceship that is only used in orbit, not the segment that would carry astronauts back to Earth. But despite the quick fix, questions still remain as to where the leak came from in the first place.

Initially, it seemed that the leak was caused by a micrometeoroid impact, something small hurtling through space that just happened to hit the Soyuz. That made sense. Debris has hit the ISS before, including an impact in 2016 that caused a seven-millimeter wide dent in a window. Other strikes have also left damage on the ISS and shuttle over the years. It’s a dangerous and pervasive enough hazard that the engineers who work on spacecraft are ready for it.

“The space station is the most heavily shielded spacecraft ever flown. Critical components, e.g., habitable compartments and high-pressure tanks, will normally be able to withstand the impact of debris as large as 1 cm in diameter,” Stephanie Schierholz, a Public Affairs Officer with NASA, said in an email. Spacecraft that dock with the ISS, she noted, have the same protection. Such vessels are often struck by very small debris and micrometeoroids, she said, with “little or no effect.”

But apparently, not everyone buys the space junk theory. On Tuesday, the AFP reported that Dmitry Olegovich Rogozin, head of Russian Space Agency Roscosmos, claimed to have ruled out meteorites as a cause. In fact, he said, he suspected the hole came from something quite terrestrial in origin—a drill.

“What is this: a production defect or some premeditated actions?” The AFP quoted Rogozin as saying. “We are checking the Earth version. But there is another version that we do not rule out: deliberate interference in space.” In other words, the agency is checking for possible engineering faults that might have left the vessel vulnerable, or perhaps a production mistake that created a hole before the spacecraft even launched. But they also speculate that someone in orbit might have gone out of their way to create the hole.

Speaking with Russian news agency TASS, Russian cosmonaut expert Alexander Zheleznyakov expressed disbelief at the idea that anyone on the ISS could have drilled the hole, which he noted was in a hard-to-reach spot. He suggested that it was more likely the hole had been made on Earth, then patched with something that managed to get through ground testing, but not the harsh environment of space.

Roscosmos is convening an inquiry to look into the nature of the leak and name the person or person’s responsible, should they find the hole was caused by human action.

NASA deferred questions about the Soyuz and the State Commission’s analysis to Roscosmos.

Roscosmos confirmed that they are convening a commission to investigate RSC Energia, the corporation that develops and builds the Soyuz. A statement released by Roscosmos says: “The investigatory commission plans to finish its work in mid-September. All conclusions and decisions will be announced after the commission’s work is completed.”

Update 9/5/2018: This story has been updated to include comment from Roscosmos.