NASA will try to create glowing rainbow clouds, and you can watch

The colorful clouds should be visible from New York to North Carolina. 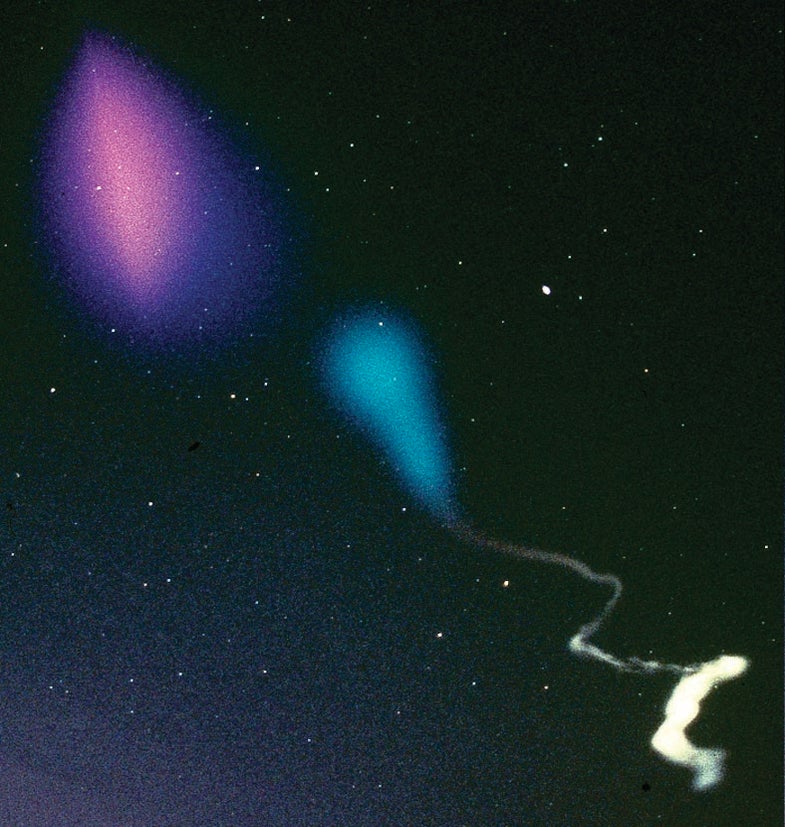 Barium clouds like this help scientists track the motion of Earth's upper atmosphere. These same chemicals are often used to give fireworks their bright colors. NASA
SHARE

Edit—6/30/17: After no less than 11 scrubbed launch attempts, NASA finally filled the sky with glowing blue and green clouds. Read more about it here.

It’s a little early for July 4th fireworks, but if all goes well this weekend, NASA will create some bursts of color in the sky over the mid-Atlantic.

Between 9:05 and 9:20 pm EDT tonight, a sounding rocket is scheduled to take off from NASA’s Wallops Flight Facility in Virginia. About five minutes after takeoff, the rocket will eject 10 soft-drink-size canisters that will spray small amounts of barium, strontium, and cupric oxide into the atmosphere. These chemicals will create red and blue-green artificial clouds that will help scientists understand how particles move around in Earth’s upper atmosphere.

The colorful puffs of vapor may be visible from New York to North Carolina, as far inland as to Charlottesville, Virginia, and via this livestream, which kicks off at 8:30 pm EDT:

This will be NASA’s ninth attempt at launching this mission. Previous attempts (including three earlier this week) were scrubbed due to high winds, clouds, and stray boats in the hazard area.

This experiment will study the ionosphere. That’s the portion of the atmosphere where charged particles streaming from the sun have stripped electrons off of atoms in our atmosphere, turning them into ions. The ionosphere starts at about 46 miles above the Earth and extends out to space for about 621 miles.

Scientists want to understand how winds in the upper atmosphere influence the movement of these ions (which you can see in the “dancing” of auroras). The movement of the colorful, glowing clouds that NASA will release in this mission will help scientists track the particle flow.

“This technique is analogous to that of injecting a small, harmless dye into a river or stream, to study its currents, eddies, and other motions,” a NASA website explains.

No. The chemicals the mission will release—barium, strontium, and cupric oxide—are all used to give fireworks their colors, and a typical Independence Day celebration dumps a lot more of the stuff into the sky than tonight’s launch will.

“A typical tracer payload will release about a pound of the material,” NASA notes. “A typical Fourth of July fireworks display releases many times that amount and is much closer to the ground.”

The canisters will spray the tracers at altitudes between 96 and 124 miles above the Earth. By comparison, commercial aircraft fly at about 6 to 8 miles above the ground.

The tracers will not change the behavior of the winds in any way, because that would defeat the point of studying the ions’ natural behaviors.

The flight of the small rocket will only last about eight minutes. It will test a new canister ejection system that allows scientists to study a larger area of the atmosphere using this method than ever before.

Cameras on the ground will track how the glowing tracer clouds move through the atmosphere. The cameras are stationed at Wallops and in Duck, North Carolina, and since they need a clear view of the artificial clouds, NASA needs at least one of the locations to have clear skies—otherwise the launch will be scrubbed yet again.

But if there are clear skies, you can expect a pretty view … and probably an uptick in “UFO” sightings.