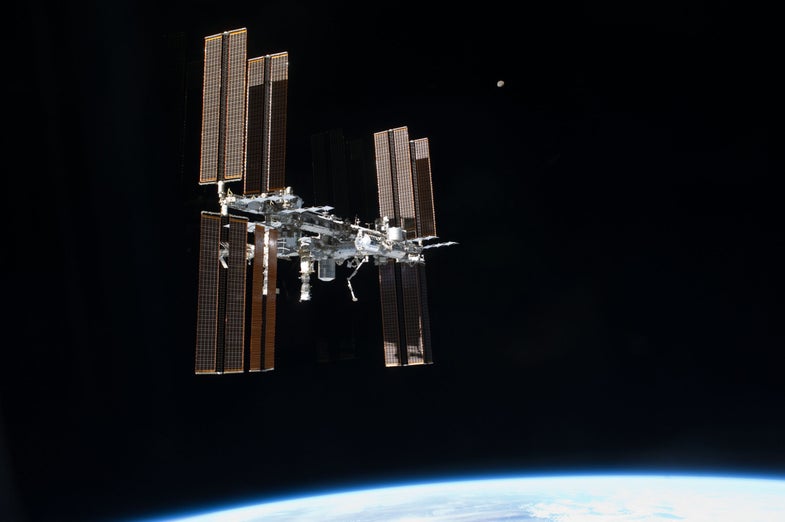 Bacteria are hard to annihilate. We have a talent for killing lots of them, but eliminating every last one is nearly impossible. This doesn’t matter so much when you’re sanitizing your hands after a bus ride or wiping down your kitchen counter. It matters a lot more when you’re trying to protect the rest of the galaxy from our germs.

NASA has an entire office devoted to this effort—the Office of Planetary Protection—and even they know that we never completely rid our spacecraft of bacterial hitchhikers. There are regulations for how much contamination is acceptable, depending on where the rocket in question is headed, but the acceptable level is never “zero.” So it’s not surprising that the International Space Station has grown its own microbiome.

It’s a fairly small, enclosed space where plenty of bacteria can thrive, so any organisms left alive are free to multiply as the ISS hurtles around the Earth. They’ve escaped the many levels of decontamination protocol and made an inhospitable space station their home. And now, scientists wanted to study them. So researchers sent DNA-sampling kits 254 miles up in the air, swabbed 15 locations around the ISS, then brought the samples back to Earth to analyze the bacterial DNA. Here’s what they found.

Microbially speaking, of course. Almost everything on this planet has some kind of microbiome, simply because bacteria like to live in certain places, and once they colonize an area they’ll stick around. This includes everything from meerkat scent pouches to doorknobs (and scientists are equally interested in both).

Like your couch and your bathroom sink and especially your phone, your doorknob has a crew of bacterial species that have taken up fairly permanent residence. Your body also has various microbiomes in all of its nooks and crannies, which are related to your house’s bacterial imprint, but ultimately distinct.

If you were to categorize the ISS, you’d probably put it in the same semantic bucket as a house. It’s a place where people live for extended periods of time, and though it’s moving at 4.76 miles every second, it’s still quite habitable. And yet, it would be surprising if the ISS were home to exactly the same bacteria as a terrestrial house. A home gets its microbes in part from the other organisms that live there, but also from the outside world. Incoming air through a window brings some bacteria, as does the dirt tracked in from the yard and the groceries brought home each week. Exposure to our atmosphere, with all its contaminants, affects the kinds of bacteria that colonize a home.

The ISS doesn’t have that exposure. Opening windows is inadvisable on a space station, and its air-locked doors admit outsiders infrequently.

So when these microbial genomics experts found that the ISS didn’t have a home-like bacterial profile, they turned instead to the human body. The most likely sources of contamination are the astronauts onboard the space station, since they can’t be scrubbed with toxic chemicals or placed in a high-pressure-high-temperature autoclave to kill residual microbes. Perhaps the ISS is colonized by bacteria that would normally live in our bodies.

But it turns out that the bodily set of bacteria is even more different from the ISS microbes than the household set—and that includes the skin bacteria. Scientists didn’t take swabs directly from astronauts, unfortunately, but they were able to compare the ISS bacteria to those from the human body using data from other studies. Previous projects have taken cotton swabs to various parts of various bodies and published that data, which the geneticists found was substantially different from the ISS set.

Not that this means the bacteria aren’t from humans at all. In fact, all of the microbes are human-associated, it’s just that the microbiome patterns from the ISS don’t precisely align with either homes or bodies. The most common type of bacteria, Actinomycetales, comes from the skin or the mouth, as do many of the other top microbes aboard the space station.

It is important to note, though, that not all of the bacteria they found were still alive. Plenty of dead microbes end up in space, just like they do in your house, and the sequencing method used in this study didn’t exclude non-viable bacteria. It was more of a potpourri of organisms both dead and alive—a microbial melange, if you will.

When humans eventually go to Mars, we won’t want to contaminate it. But we also might not want to live in a totally sterile environment for the many months it takes to get there.

Prior research has shown that astronauts who live on the ISS for long periods have lowered immune function when they return to Earth. This isn’t such a big deal for people who can return to a health care system and who are only away from this planet for a short time, at least as compared to a Mars trip. If we’re planning on sending people off on years-long missions, though, we want to make sure that their immune systems are still capable of fighting off diseases. Any harmful pathogens that could survive the decontamination protocols could kill an astronaut with weakened immunity.

And even if there aren’t killer pathogens, it’s important that we understand the bacterial environment that we’re fostering in space. The ISS is our only way to study that right now, but spaceships could become long-term homes for people in the not-too-distant future. It would be nice to know something about the kinds of microbes we’re bringing along for the ride.