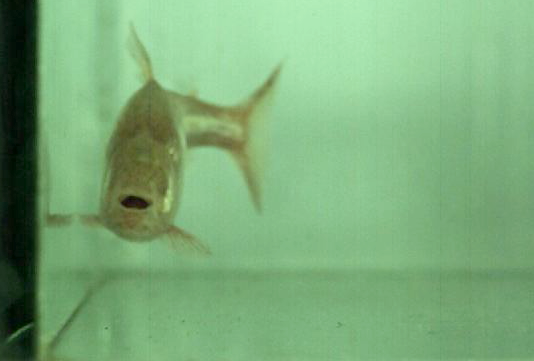 Mexican tetras, or blind cavefish, have a unique way of navigating through their environment, not seen in other animals: They use their mouths to create waves of suction, which are then reflected onto their skin, helping the fish avoid obstacles. They create the suction by opening and shutting their mouths, appearing to go “oop, oop.”

In a recent study, scientists found that the fish do this 3.5 times more often than usual when the orientation of their aquarium has been moved around. They are like other fish in possessing a lateral line, an organ that can sense currents and pressure changes in the water. But the suction creates currents 50 times stronger than those from swimming alone (which also makes waves than can bounce back toward fish, telling them about their surroundings), as noted by Discover Magazine.

In the study, authored by Tel Aviv University zoologist Roi Holzman and others, the scientists also found that “the frequency and rates of mouth opening events varied with the fish’s distance to obstacles, a hallmark of pulse-based navigation mechanisms such as echolocation.” In other words, the fish act in this way a bit like bats bouncing sound waves off their surroundings. They then created a mathematical model to see how the system would work, and filmed the water at high speed with glass beads in it, allowing them to visualize the flow.

Holzman told Discover than he thinks other fish may be able to do the same thing. After all, they possess mouths and lateral lines, the “emitter and the sensor.”

Interestingly, blind cavefish (Astyanax mexicanus), many of which completely lack eyes, are considered the same species as nearby surface-dwelling Mexican tetras (which have eyes and can see). What would happen if an eyeless and eye-possessing fish mated? One study found that eyesight can indeed be restored in their offspring.

For more on incredible fish, here’s one that climbs waterfalls by gripping with its mouth.