Video: Jellyfish Made From Silicone and Rat’s Heart Cells Swims and Beats Like a Heart

Despite being one of the most alien-looking things on Earth, the mechanism jellyfish use to swim is similar in some... 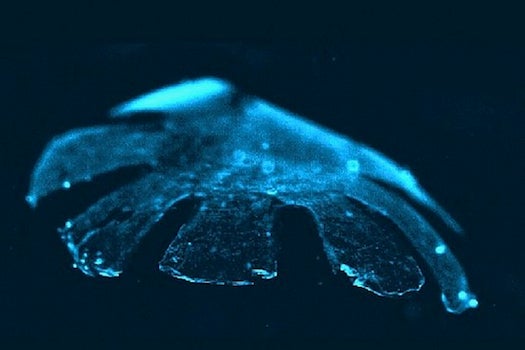 Despite being one of the most alien-looking things on Earth, the mechanism jellyfish use to swim is similar in some ways to the beating human heart. That inspired researchers to build a sort of cyborg jellyfish from the ground up, using heart muscle cells from a rat and silicone polymer. And it’s actually only a little more odd-looking than a regular jelly.

The heart cells harvested from the rat were grown onto the silicone. When an electric current is sent through the water, the jellyfish–named “Medusoid”–contracts in a way that mimics a heart. The technique could eventually lead to scientists creating bio-engineered systems for humans, such as a pacemaker that works without batteries. The jellyfish could also make a good vessel for testing heart drugs before they’re used on humans.

The next step, researchers told the Wall Street Journal, is to make the jellyfish even more autonomous by creating one that can find nutrients on its own.