You can test your fish schooling smarts, too. 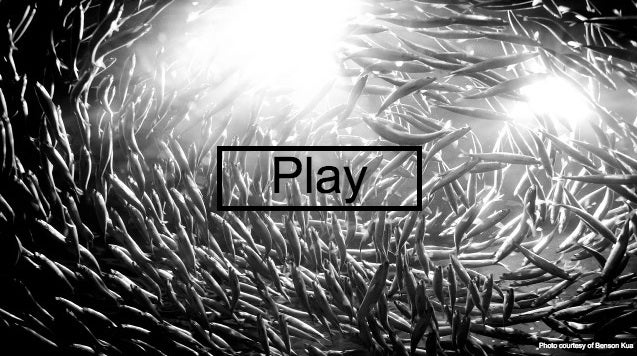 Can you tell the difference between robot fish and real ones? You can take this online test to find out. Here’s the catch: For every question, both fish schools are rendered as green dots on the screen. It’s just that one set of dots corresponds to the actual movements of Pacific Blue Eye fish researchers filmed. The other set of dots moves according to algorithms researchers wrote.

The algorithms are based on everything the researchers know about how Pacific Blue Eyes school. Testing whether people can tell the algorithmic fish apart from real fish movements is one way to evaluate how well the team understands schooling behavior, mathematician Maksym Romensky wrote in a blog post. Romensky and his colleagues at Uppsala University in Sweden study the movements of large animal groupings, such as bird flocks and cicada plagues.

If you take the online test, the site will log how well you fare, data that Romensky and his colleagues will presumably analyze later. That said, I would guess many suburban and city folk are too removed from nature for tests like this to be meaningful. Might they not also be fooled by a poor algorithm? People have been able to tell older animal-group simulations are not real, Romensky writes. His colleague, biologist James Herbert-Read, pointed me to this bird-flock simulation, from 2011:

Did that strike you as obviously wrong? It seemed a bit strange to me, but I still felt uncertain.

Romensky, Herbert-Read, and their colleagues also tested their algorithmic swimmers on researchers who study fish behavior. On average, the fish experts got 4.5 out of 6 questions right per game, which is slightly better than chance. They also got better over time. So there’s still room for improvement for the algorithms, even if I can’t see it. My score was 3/6, exactly chance.