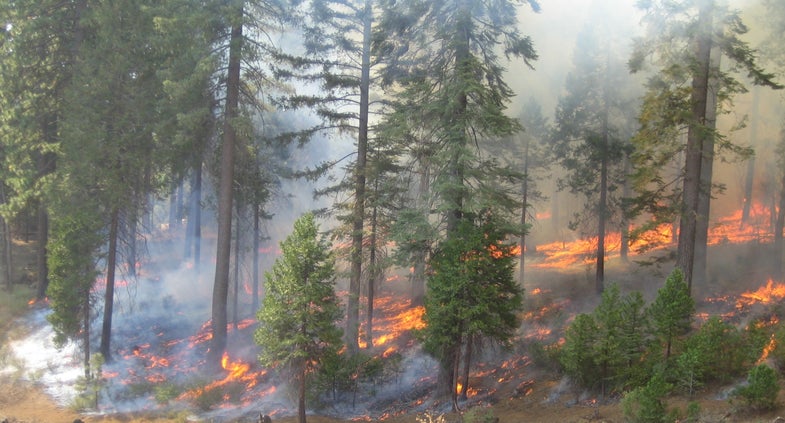 The size and swiftness of this weekend’s deadly Valley Fire in California was startling. But could it (and the other fires currently raging out west) have been smaller if fires in previous years had been allowed to burn?

The authors of a new paper published today in Science certainly think so. In looking at forest fires in the United States, the researchers found that the vast majority of wildfires were kept extremely small, with 98 percent limited to less than 300 acres. Keeping fires small has been a goal for decades, as firefighters tried to preserve the forest the best way they knew how.

Currently, the thousands of firefighters working to control firefighters try to suppress them, or contain them in a specific area where the fires can safely burn themselves out, by building earthen barriers, using water, or even setting small fires to use up fuel (sticks, trees, grasses) before the larger fire gets there. 98 percent of the time, this method works great. But then there’s the last 2 percent. That 2 percent accounts for the monster fires, ones that burn through 97 percent of the land burned every year, and also accounts for 97 percent of the cost of fighting fires.

All that money has to come from somewhere, and comes directly out of federal budgets. An accompanying editorial in Science points out that longer fire seasons and drier conditions are forcing the US Forest Service to spend a whopping 50 percent of its budget on firefighting this year. 20 years ago, the same agency spent just 16 percent of its budget on the same task.

So what’s to be done? The authors suggest a radical option. Let it burn. Or, set some of the fires ourselves. Instead of just focusing on reacting to the fires we have, the authors say that we can prevent the mega-fires that threaten homes and structures by allowing some fires to burn larger areas, eating up way more fuel in the process and clearing out dead trees. The idea has been around for a while. In Australia, controlled or prescribed burns are fairly common during cooler, wetter seasons, when fires can be managed even over large areas, but the idea isn’t always popular with the public, who object to the large amounts of smoke created by the fire.

In this case though, a little smoke today might be a better deal than a huge fire sometime in the future.