Why we turn stars into constellations

The stars are not a blank canvas across which we can sketch every fanciful idea. 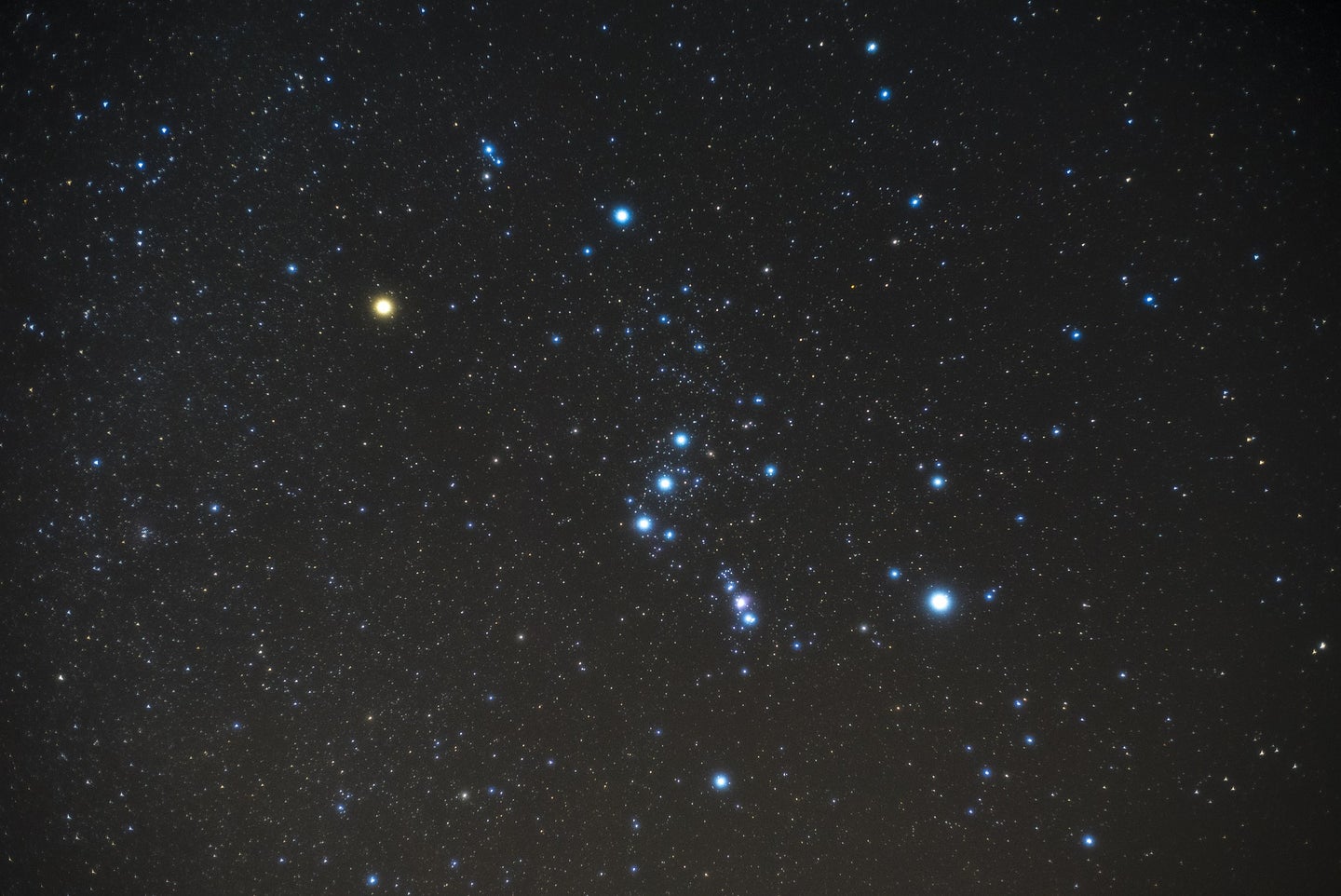 The constellation Orion, which has a similar story in Greek and Australian Aboriginal cultures. Pixabay
SHARE

“There’s not actually a dinosaur constellation, right?” I asked aloud to no one as I peered up at the stars sparkling in the dark.

Moments earlier I’d driven through the town of Dinosaur, Colorado. Now, as darkness settled around my car, I thought I spotted a sauropod in the stars through my driver’s side window. I chuckled to myself, feeling silly for seeing dinosaurs where there certainly were none, and chalked it up to the power of suggestion.

But, it turns out, I wasn’t just being silly. I was participating in a human tradition that extends back millennia, says Daniel Brown, associate professor in astronomy and science communication at Nottingham Trent University in England. The night sky, he says, is “an ideal canvas” for viewers to interpret and find visualizations of something that is relevant to their lives. “This is how we normally would start referring to constellations.”

But constellations aren’t just a sketch of every individual’s fanciful ideas. The way that the stars are splashed across the sky invites humans to see certain patterns. In fact, despite viewing the sky from distinct angles, many cultures around the world have identified groupings of stars in remarkably similar ways. Those parallels, and differences, offer a reflection of the astronomical dynamics playing out over the night sky, as well as the values and mindsets of the people who look up at it.

Constellations have long served as maps for navigation, canvases for storytelling, calendars for seasonal changes, and charts by which to impart knowledge and meaning.

“Up until recently in human history, we didn’t have structured, written languages. Language was communicated orally,” says Duane Hamacher, associate professor of cultural astronomy at the University of Melbourne in Australia. “But the human brain evolved to be able to memorize enormous quantities of information. One of the ways that is done is through associating a memory to place, called the method of loci—which, he explains, includes the stars.

[Related: What would happen if the Milky Way died?]

By passing on knowledge of the constellations, deep cultural memories persist. Today, researchers have noticed a pattern: Many of the brightest stars are grouped together in strikingly similar constellations across cultures that historically had no known contact with each other. Western stargazers might know some of those star groupings as the Big Dipper, Orion, the Pleiades, and the Southern Cross.

These particular star groupings draw the eye with their brightness and proximity to each other in the night sky, attracting stargazers from both hemispheres, according to a team of researchers from the University of Melbourne. The researchers used a mathematical model to systematically group stars by their prominence and proximity, and compare those groupings against constellations from 27 different cultures around the world. This process tested what is considered a principle of how human visual perception works: The Gestalt law of proximity, which states that objects that are close together are perceived as unified groups, regardless of how different those objects may be individually. In a paper published earlier this year in the journal Psychological Science, the University of Melbourne experts found that those perception principles likely explain why so many different cultures have grouped the same stars together into constellations.

But the similarities don’t stop at which stars people visually group together. Humans have often mapped familiar images and stories over those pinpricks of light. And even those stories are often strikingly similar, despite being influenced more by cultural context than the characteristics of the stars themselves.

For example, says Hamacher, who is an author on the Psychological Science paper, the male figure of Orion is often seen as a man or men pursuing a group of girls or women, whom the ancient Greeks called the Pleiades. A V-shaped grouping of stars, the Hyades, stands between them and Orion. There are subtle differences, he says, in cultural interpretations of this guardian constellation. The Greek version has the Hyades appearing as Taurus the bull preventing Orion from reaching the girls. Meanwhile, some Australian Aboriginal traditions tend to depict Orion as a womanizer who falls in love with the sisters—but their older sibling stands in his way.

In many of the versions of the story, the details of this pursuit and defense reflect the motion and dynamics of the stars themselves. Because of the Earth’s rotation, these constellations move across the sky throughout the night, with Orion appearing to chase the Pleiades. Some Aboriginal cultures see Orion as upside-down with the red of the star Betelgeuse in his right hand as fire magic that the warrior creates to battle the elder sister, Hamacher says. Meanwhile, the red star Aldebaran in her left foot (often seen as the red eye of the bull in Greek traditions) is about to kick sand in his face. The fire magic flickers and grows as they face-off, reflecting how Betelgeuse, which is a variable star, dims and brightens over 400 days.

From legends to machines

The period of time when people created stories about shapes in the sky also matters. For example, Brown says, many of the Western culture’s constellations as seen from the Northern Hemisphere are more mystical creatures and tales, based on Greek mythology. Those constellations were described in an anthropology of constellation stories written in the third century BCE, so many were likely identified long before that. Thousands of years later, Western explorers into the Southern Hemisphere documented the patterns they saw in the stars on their travels to include more technical tools, particularly instruments for navigation, like a sextant or a compass.

“You’ll find loads of things that are far more associated with the Age of Discovery,” Brown says. “That’s not surprising because our cultural group started to explore the Southern Hemisphere at a time when all of these clocks and things would have been far more prominent.”

But what those Western explorers didn’t consider, Brown says, was those groups of stars that had been identified and named thousands of years earlier in the Southern Hemisphere night sky by the people who were already living there—with very different interpretations.

“This is why I always stress that the Western, Greek constellations are just one way in which these patterns can be interpreted,” Brown notes. Listening to the ways people around the world make sense of the patterns they see in the stars can illuminate aspects of their culture and what is relevant to them.

Hamacher and his colleagues are conducting experiments to see what kinds of constellations people make up on their own. In a planetarium, they present audiences with a simulated night sky with stars in fake positions. When modern viewers connect the dots to make shapes, he says, it reflects their culture and geography. “You’re not going to get a lot of Australians who are going to see a squirrel in the stars, and Americans are not going to see a koala,” Hamacher says.

Stars aren’t the only thing visible in the night sky, Hamacher adds: There are also nebulae planets and the moon. And in some parts of the world, the night sky gets dark enough to see the dark voids where starlight is absent in the Milky Way.

In the Southern Hemisphere, those spaces are often traced into what are called dark constellations. Because the air is much less humid in Australia than many other parts of the world, the continent is a particularly good place to see some of the darkest night skies.

Some cultures also see similar patterns in dark constellations, too. For example, Hamacher says, Aboriginal cultures see an emu in the dark space of the Milky Way between the Southern Cross and Sagittarius. In South America, some people also see a large flightless bird called a rhea.

Many stellar patterns only appear during certain times of the year (others, that linger near the poles, are visible all year long). In Australia, the emu starts becoming visible in the evening during the same time of year when the birds are breeding, building their nests, and laying their eggs. Because people would typically go out and forage those eggs, Hamacher says, the seasonal appearance of the dark emu constellation also served as a sort of harvest calendar for people.

[Related on PopSci+: This Colorado community fought to save its darkness]

Light pollution can be another factor in how different people view the stars. Today, the artificial bulbs that illuminate the night also interfere with starlight, washing out the Milky Way and all but the brightest stars for millions of residents in urban, suburban, and adjacent areas.

“But they don’t fade away entirely. I just need to look into my Stellarium app,” Brown says, referencing one app to help users identify constellations. “We still have access and knowledge about what’s in the sky. We engage with the sky now in a completely different manner, in this kind of virtual way.”

Constellation apps also offer viewers access to night sky knowledge from across the globe. Users can see the various cultural interpretations of the patterns in the stars splayed across their screens as they peer at the night sky.

“You can learn about so many other cultures because you can look into the sky. You’re straightaway in touch with something that somebody in the depths of the Amazon might see, and that somebody might have seen when they were building the pyramids,” Brown says. “That’s our shared heritage.”