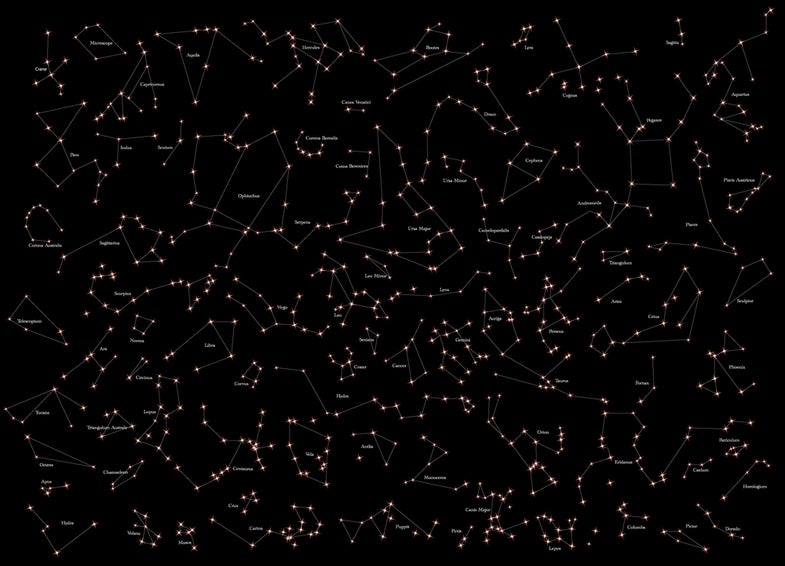 When you look up into the sky on a clear night, you’ll see stars littered throughout the darkness. It may seem like a random pattern. But some people used those patterns to tell stories—and the stars still have uses for scientists today.

A constellation is a group of stars that create a recognizable pattern in the sky. There are 88 officially recognized constellations, some of which are named after mythological creatures and might sound familiar if you’ve ever looked up your horoscope.

Anthony Cook, an astronomical observer at the Griffith Observatory in Los Angeles, says constellation patterns are useful for memorizing stars in the sky. In ancient times, different cultures recognized these patterns in different ways, he says, but a lot of the constellations we know today were defined in Ancient Greece.

Some of them are named after heroes like Hercules and Orion. Other star patterns are named after animals, like Ursa Major or the big bear. The stars acted as a way to preserve stories, like the legend of Perseus rescuing princess Andromeda from a sea monster named Cetus. Certain parts of the sky let you see the whole story from one constellation to the next, Cook says.

These constellations are used for more than just remembering stories, Cook says. Explorers used constellations to navigate. Ursa Minor, or the little bear, contains the North Star, a bright star that hovers right over the north pole. Knowing the location of that star means knowing where north is, which is pretty important for getting around without the help of a map. Cook says it can also tell you your latitude based on how high it is above the horizon.

To fill out every corner of the sky, Cook says new constellations were named. This explains more modern names for constellations, like Microscopium, the microscope, which was named in the 18th century.

Constellations can also come in handy when naming or identifying stars. Most stars are logged and given a number. A star’s catalog number might include the name of the constellation it’s in. Alpha Centauri, the stars closest to Earth, exist in the Centaurus constellation.

Even over thousands of years, the constellations remain relatively stable, Cook says. Stars are moving past each other at rapid speeds, but they are so far away that if you went back in time to the ancient Greeks, he says you’d probably not notice a difference from today’s sky.

If you want to start exploring the stars in your sky, there are quite a few apps out there that can help you spot the constellations right above your head. So get out there and start gazing!