Megapixels: NASA snapped a shot of a holiday ‘wreath’ in space

It's actually more of a holiday yardstick. 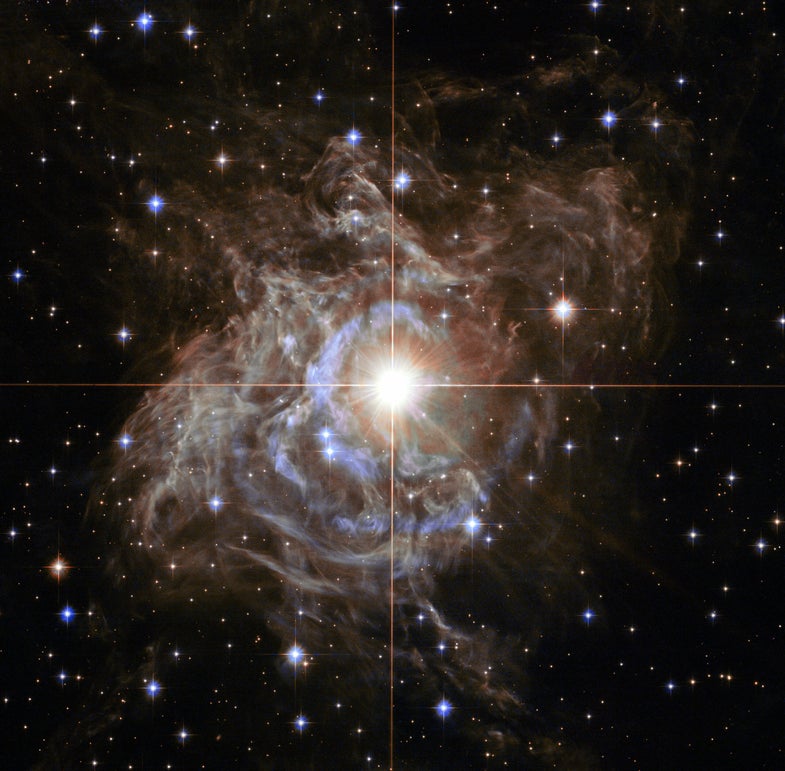 This season is full of stories about stars guiding travelers to far-off destinations, but imagery from NASA’s archive shows off a stellar guide of a different sort. The central point of this holiday “wreath” is a bright star known as RS Puppis, or RS Pup for short. RS Pup is what’s called a Cepheid variable: a star that periodically dims and gets brighter. The change in luminosity is due to instability—these are large, short-lived stars that are already nearing the end of their chemical fuel reserves, and don’t maintain steady transfers of temperature from layer to layer. Astrophysicists can use the variability of these stars’ light to calculate how far away they are (6,500 light-years, in this case), allowing them to serve as a sort of cosmic yardstick.

RS Pup cycles through one of these pulsations every 41.5 days, with a rapid rise in brightness followed by a much slower descent back into its dimmest state. It’s 200 times larger than our sun and 10 times as massive, with an average brightness 15,000 times greater than our modest host star.

The so-called wreath portion of the image is actually a nebula surrounding RS Pup; a region of interstellar space rich with gas and cosmic dust. This nebula is made to look particularly striking by RS Pup’s bouncing luminosity, which means that different clouds of dust in the nebula reflect bursts of bright light at different times. Check out a time-lapse video of the effect, which is known as a light echo:

We’re not actually watching the nebula’s gas move through space. We’re seeing the pulsation of RS Pup’s light radiate away from the star, creating what looks like ripples in a pond as it encounters reflective dust on its way.

This isn’t the first holiday-themed space image from NASA. The agency has unofficially dubbed another object “the wreath nebula,” and last year made the case that planetary nebula NGC 6326 looked like a holiday ornament. NASA has also been known to get into the holiday spirit for Halloween, July 4, and Star Wars movie premiers. We could get cynical about the never-ceasing internet content machine, or we could enjoy the fact that space is so beautiful and so full of variety that one can dig up cosmic imagery pegged to pretty much any occasion.