NASA’s first attempt to smack an asteroid was picture perfect

The DART spacecraft is now in smithereens, but its legacy will shape interplanetary defense for years to come. 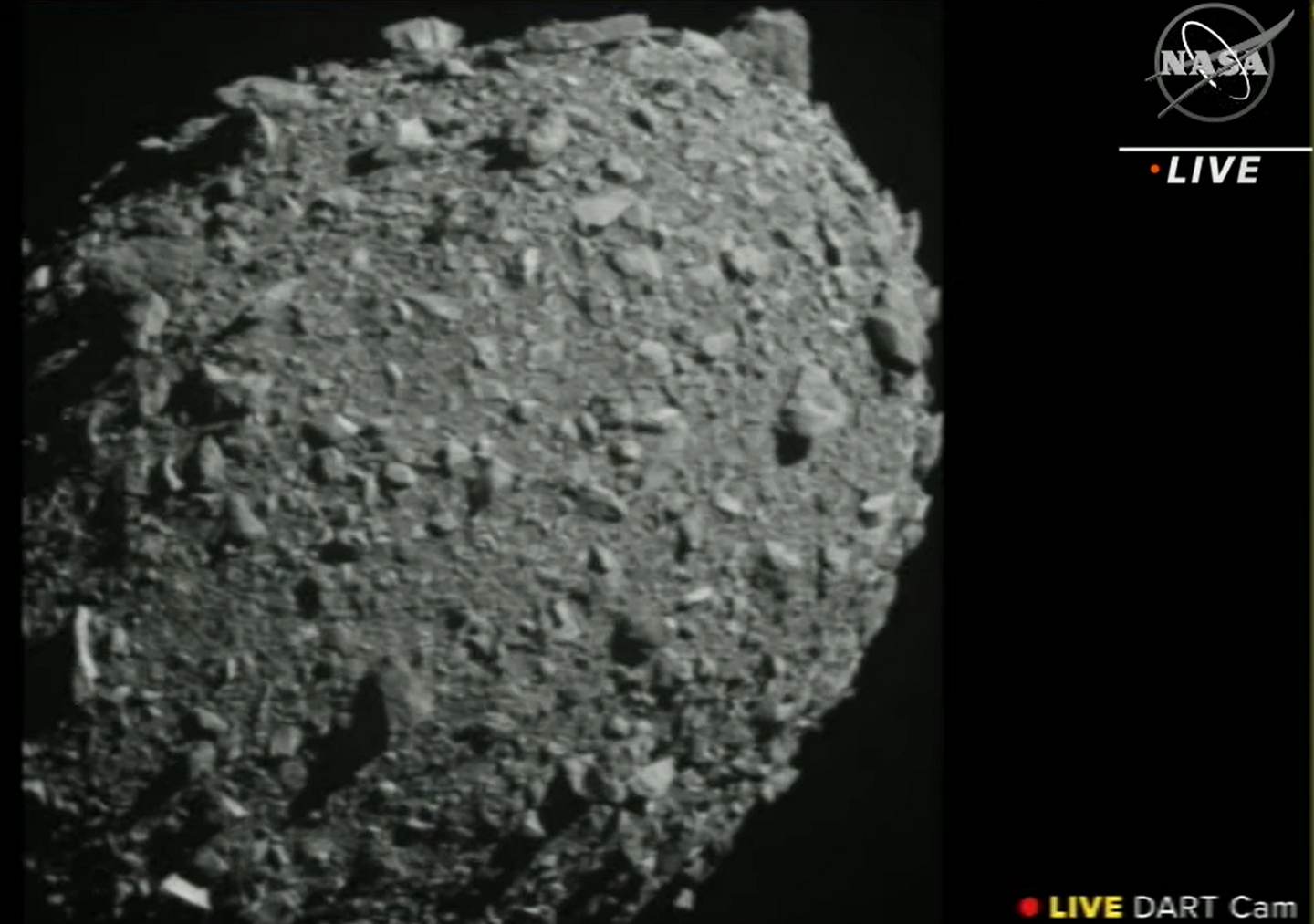 Tonight, the world got to see if NASA’s attempt to redirect the asteroid Dimorphos would be a smashing success. While it’s too early to know if the test fulfilled all of its goals, the first leg went exactly as planned.

Around 7:16 p.m. Eastern, the car-sized spacecraft made kinetic impact with its target. After getting visual confirmation from the vehicle’s cameras, the operations team at the Johns Hopkins Applied Physics Laboratory (APL) in Maryland announced, “All right we got it.” Then the signal from the beat-up spacecraft went dead.

“Now is when the science starts. Now that we’ve impacted, we’re going to see how effective we were,” Lori Glazer, director of NASA’s Planetary Science Division. said during the live broadcast. “We’re embarking on a new era of humankind. An era in which we potentially have the capability to protect ourselves from something like a dangerous asteroid impact … What an amazing thing.

As a dry run for future asteroid forecasting and deflection, the spacecraft named Double Asteroid Redirection Test (or DART) slammed itself into an asteroid at 14,000 mph tonight around 7 million miles away from Earth. Space telescopes and cameras watched the crash, but it will take days or possibly weeks to find out if DART actually changed the orbit of the rock. “This is stuff of science-fiction books and really corny episodes of ‘StarTrek’ from when I was a kid, and now it’s real,” said NASA program scientist Tom Statler last week at a media briefing.

The $325 million planetary defense test began with DART’s launch in November 2021. The goal is for the spacecraft to nudge the 525-foot-wide asteroid into a tighter orbit around its parent rock (Didymos, the Greek word for “twin”). Dimorphos is a smaller companion to the 2,500-foot-wide Didymos, and is a moonlet orbiting the larger rock at at less than a mile apart. The two make up a binary asteroid system—meaning that the the small moon (Dimorphos) orbits the larger body (Didymos). This pair of asteroids was partially selected because there is absolutely zero chance that either asteroid will threaten Earth, according to NASA.

[Related on PopSci+: The inside story of NASA’s mission to Psyche]

“This really is about asteroid deflection, not disruption,” said Nancy Chabot, a planetary scientist and mission team leader at Johns Hopkins University’s Applied Physics Laboratory, at last week’s briefing. “This isn’t going to blow up the asteroid. It isn’t going to put it into lots of pieces.” The impact will dig out a crater tens of yards in size and hurl some 2 million pounds of rocks and dirt into space.

DART weighs in at 1,260 pounds, but punched way above its weight when it slammed into the 11-billion-pound asteroid. “Sometimes we describe it as running a golf cart into a Great Pyramid,” said Chabot. The spacecraft did not survive the impact, and its pieces will slowly spread apart in the asteroid system’s low-gravity field.

The DART spacecraft was built by APL, at the direction of NASA’s Planetary Defense Coordination Office (PDCO). APL is operating the mission which aims to demonstrate that an asteroid large enough to be destructive (or any that are just a few hundred feet wide) can be deflected when a spacecraft is intentionally crashed into it. This method is called kinetic impact deflection, and it is just one of several proposed ways to redirect potentially hazardous asteroids.

[Related: An asteroid the size of a blue whale is speeding past Earth today]

The impact of the collisions was only be visible from a small part of the Earth, passing over Reunion Island, an island in the Indian Ocean, and the South African Large Telescope in Namibia, according to the European Space Agency.

NASA put the odds of DART missing the asteroid at less than 10 percent. While the crash itself was inevitably exciting, the mission isn’t just about smashing into space rocks to see if we can do it. It will also help scientists improve forecasting models to prepare for destructive asteroids. After tonight, the investigation team will measure how much the asteroid is deflected using telescopes back on Earth.

DART is one of multiple asteroid-related space missions. Nearly a pound of space rubble from the distant rock Bennu is currently headed to Earth for further study, and should arrive via NASA’s OSIRIS-REx Spacecraft in September 2023. Japan was the first to retrieve asteroid samples, and China hopes to follow with a mission planned for 2025. Additionally, NASA’s Lucy spacecraft is exploring the Trojan asteroids near Jupiter, and the Near-Earth Asteroid Scout is loaded into NASA’s new moon rocket awaiting liftoff as part of the Artemis I mission.

See the full video of the countdown and moment of impact below: