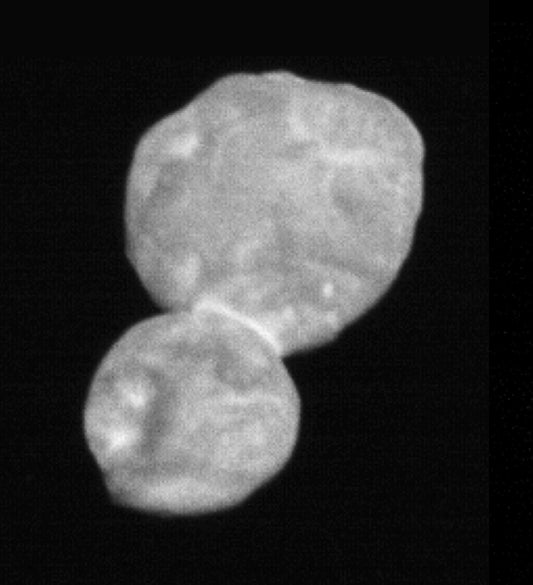 NASA began 2019 with a bang, when the agency’s New Horizons spacecraft completed a flyby of 2014 MU69, the most distant object ever visited by humans, in the wee hours of January 1. NASA finally heard back from New Horizons around 10:30 a.m. Tuesday, several hours after it had already zipped past MU69, which is 4.1 billion miles away from Earth. The flyby, occurring as the spacecraft was blasting through space at over 30,000 miles per hour, had only one shot of success.

Before the flyby, we only had the weakest glimpses of MU69. The best was a six-pixel photo taken from over half a million kilometers away, showing us a peanut- or bowling ball-shaped figure about 21 miles in length.

But, as succinctly summed up by the Southwest Research Institute’s Alan Stern, the principal investigator of the New Horizons mission, during a press conference held Wednesday, “that image is so 2018.” The New Horizons team at NASA is finally getting around to sifting through all of the incredible images and bits of data collected by the spacecraft’s seven science instruments during the flyby, and yesterday, NASA officially released the first close-up images of MU69, the best of which is nearly 20,000 pixels in size, taken from as close as 17,000 miles away.

What we’re left with is a clearer view of the double-lobed object: “that bowling pin is gone,” said Stern. “It’s a snowman if anything.” The large and small lobes’ volumes differ by about a three-to-one ratio.

And there’s much more we’ve gleaned in just the first sets of data. We now know for certain that MU69 emits a red color, and that the larger lobe (12 miles across) has a rotational period of about 15 hours, give or take an hour. When it comes to reflectivity, MU69 is “like potting soil,” said Cathy Olkin, the mission’s deputy project scientist, also based at the Southwest Research Institute. “This is a very dark object.” The brightest spots of the rock only reflect about 13 percent of the incidence of sunlight, while the darkest spots reflect a paltry 6 percent.

“When I look at these pictures, I really think of it as the essence of exploration,” Thomas Zurbuchen, the associate director of NASA’s Science Mission Directorate, said at Wednesday’s press conference.

MU69 is located in the vast reaches of the Kuiper belt, the icy portion of the solar system that exists beyond Neptune’s orbit. MU69 is not exactly an exotic world—it shares the same typical traits as most of the other objects in the region. But like its geological neighbors, it’s thought to possess some insight into the origins of the solar system itself.

“We think what we’re looking at is perhaps the most primitive object that has yet been seen by any spacecraft,” said Jeff Moore, New Horizons’ geology lead scientist based at NASA’s Ames Research Center. “These are the only remaining basic building blocks in the backyard of the solar system that we can see.” Moore likens New Horizons to a “time machine” that could unravel some of the biggest mysteries of the early solar system.

For example, MU69’s spherical lobes strongly suggest the rock wasn’t formed by a high-impact collision of two objects, but rather as a soft meeting. The object most likely formed separately as aggregations of smaller icy pebbles, and eventually started a romantic orbital dance around one another, slowly coming together until they simply joined up, with a rocky neck building up between the two spheres. As opposed to a violent crash of two objects, “you can think of it more like a docking of spacecraft” occurring at an extremely slow speed, said Moore.

That sort of insight can help scientists better understand the formation of planets, within the solar system and potentially in other star systems as well. These findings are “going to revolutionize our knowledge of planetary science,” said Stern.

There is plenty more for the New Horizons team to unveil. Tomorrow will bring another round of new scientific data to unpack, and the team says its highest-resolution images, which should be on the scale of a megapixel, are yet to be processed and released. We’ll have more coming up as the New Horizons team unveils more of MU69’s secrets.