The National Reconnaissance Office is giving away its secret double Hubbles 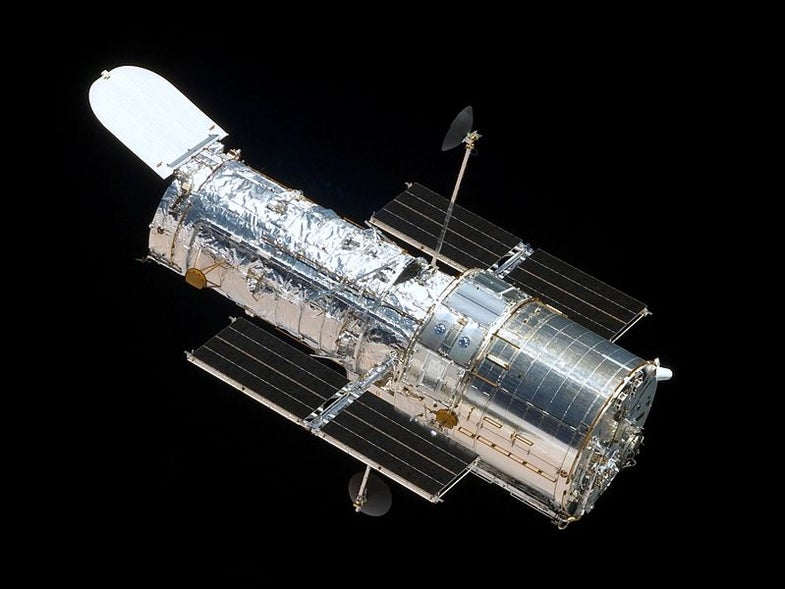 It almost sounds too good to be true. Twin Hubble-quality space telescopes currently collecting dust in upstate New York are getting a second chance at flight, and they could be the best thing to happen to NASA since the real Hubble’s mirrors were fixed. The unused scopes are even the same size as the beloved space telescope, and nary a civilian knew they existed until yesterday.

The former spy telescopes were donated by the National Reconnaissance Office, and according to NASA’s plans, when they launch into space, they’ll be looking out at the cosmos — as telescopes rightly should — rather than down on Earth.

NASA unveiled its plan on Monday to use one of them to study dark energy, potentially shaving years and a quarter of a billion dollars off its plan to build the most important observatory in decades.

Apparently the NRO called up some NASA officials a year ago to discuss bequeathing some spare “unused hardware,” as the New York Times puts it. NASA started checking them out, and found they are wonderful, highly complex instruments. Jaws dropped throughout the astrophysics community as scientists realized the impressive scopes’ optics are “astounding,” and that they’re equipped with technology that will make them easy and affordable to use in Earth orbit.

Loretta Desio, a spokesperson for the NRO, told Spaceflight Now the telescopes were built in the late 1990s and early 2000s. Their optics make them more powerful than Hubble.

NASA took ownership of them in August, and since then agency officials and a small team of astronomers have been trying to figure out what to do with them. John Grunsfeld, who famously repaired the Hubble in space on three separate occasions and now serves as NASA’s space science chief, initially thought they’d be a headache and a storage problem, he told the Times. Then he started asking astronomers how they might be used, and put together a plan to use them to study dark energy. The plan: One of the telescopes (maybe both someday?) could serve as the science community’s long-hoped-for Wfirst.

Wfirst is the Wide-Field Infrared Survey Telescope, a $1.5 billion project that in 2010 became the highest priority in space science for the next decade. Formerly known as the Joint Dark Energy Mission, Wfirst would be able to find multitudes of exoplanets in distant galaxies and hopefully answer some questions about dark energy. This mysterious force, which helped three American physicists win the Nobel Prize last fall, permeates the universe and will determine its fate; it’s the most important question in modern physics. But plagued by budget issues and cost overruns related to its next big observatory, the James Webb Space Telescope, NASA has said it won’t be able to build Wfirst for another 12 years at least.

The NRO telescopes, which are being called NRO-1 and NRO-2 for now, are capable of serving as Wfirst. Consider this for a minute: Instead of spending hundreds of millions of dollars to develop a brand-new telescope, the nation can use one it already had, but never knew about. This could save the country $250 million, the Times says, quoting NASA’s acting deputy director for astrophysics.

The Times’ Dennis Overbye reports that the two scopes each have a 94-inch primary mirror, just like Hubble. That’s twice the size of the planned mirror for Wfirst, so it would have four times the light-gathering ability. Also, they have a shorter focal length, giving them a wider field of view in which to look for phenomena like supernovae. They’re “Stubby Hubbles,” according to Matt Mountain, director of the Space Telescope Science Institute, which manages the Hubble. He also told Overbye, “They were clearly designed to look down.”

This raises a lot of questions, but unsurprisingly, the NRO is keeping mum. One question: What other incredible pieces of technology do our country’s spy agencies have just sitting around? If telescopes of this caliber are languishing on shelves, imagine what they’re actually using.

Congress, the National Academies and other groups still have to greenlight all of this, and the costs are still quite unclear, but it sounds promising — almost too good to be true, several astronomers agreed. And isn’t it amazing, almost ridiculous, to think about? Yes, the government’s spy agencies do have a pair of awesome, secret, spare super-spacecraft that they might give NASA if they feel like it. Let’s just hope there’s no Texas-sized asteroid coming our way and no one is telling us.