It’s getting closer all the time. 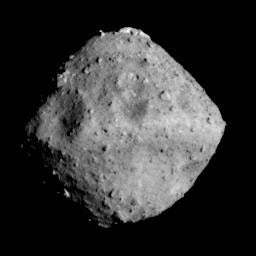 It’s been nearly four years since the Japanese spacecraft Hayabusa-2 blasted off, heading for a small asteroid that was then known only as 1999 JU3.

Back then, we didn’t have many details about 1999 JU3—not even a good picture of the object. But JAXA, the Japanese space agency, still planned to visit it with Hayabusa-2, use explosives to blast debris off its surface, scoop up the fresh asteroid dust and return its cargo back to Earth, after depositing a few mini-rovers on the surface of the asteroid, of course.

The asteroid needed a better name. Eventually it was reborn as Ryugu, the name of the underwater palace of the Dragon God in Japanese mythology. The hero in one Japanese legend visits Ryugu and returns with precious cargo, a trajectory that Hayabusa-2’s creators hope to emulate with more success than the original Hayabusa mission. While that sample-return mission to an asteroid did succeed in bringing back a very small sample of asteroid dust in 2010, the mission encountered a host of obstacles and malfunctions.

Hayabusa-2 started its final approach towards Ryugu on June 3, and the asteroid is starting to come into focus. But it takes time to get a clear picture. In this image, taken on June 10 from 1,500 miles away, Ryugu is a blob just 5 or 6 pixels across.

By June 14, Hayabusa-2 was 700 km away, and JAXA researchers were finally able to see the asteroid’s rotation, which is in retrograde—rotating in the opposite direction in relation to the orbit of planets around the Sun. It was also rotating around its vertical axis.

As the spacecraft gets closer, more details emerge. Researchers found that Ryugu makes a full rotation every 7.5 hours, and found that it’s tapered shape resembled a spinning top. Mission Manager, Makoto Yoshikawa wrote “When I saw these images, I was surprised that Ryugu is very similar in shape to both the destination of the US OSIRIS-REx mission, asteroid Bennu, and also the target of the previously proposed MarcoPolo-R mission by Europe, asteroid 2008 EV5.” Yoshikawa writes. “So far, the asteroids we have explored have been different in shape, so Ryugu and Bennu could be the first time two similar-shaped asteroids have been examined. It will be interesting to clarify exactly what this similarity means scientifically.”

NASA’s OSIRIS-REx mission is scheduled to begin its approach to the asteroid Bennu in August of this year. Though they are on two separate timelines (OSIRIS-REx launched in 2016, and will spend a year surveying the asteroid), a main goal of both missions is to return a sample of an asteroid to Earth, a project scientists from each mission have been working closely together on to share information.

In the most recent photo (seen at the top of this post) an even more detailed image comes into focus, an angular spinning shape pocketed with craters. Project Manager, Yuichi Tsuda compares the shape to the crystalline shape of fluorite, which he says in Japanese is known as the “firefly stone.” The resemblance is pretty uncanny.

Ryugu is technically classified as a Potentially Hazardous Asteroid, but this does not mean you need to worry about it. As Ryan Mandelbaum points out at Gizmodo the ‘potentially hazardous’ designation does not mean that an asteroid is likely to hit Earth any time soon. It could, maybe at some point in the distant future, but it’s being tracked and closely monitored, so we’d have plenty of warning should its path eventually cross our own.

Researchers are interested in Ryugu because it is a C-class asteroid, one of the most common types of asteroids. By analyzing material from the space rock, scientists hope to get a better understanding of how bodies in the solar system, from asteroids to planets, developed.

Hayabusa-2 is scheduled to arrive at Ryugu on June 27, staying about 20 km above the asteroid’s surface. If all goes well, it will gather its first sample sometime between September and October.