Bennu delivers a few surprises in NASA's first mission to retrieve pieces of a near-Earth asteroid. 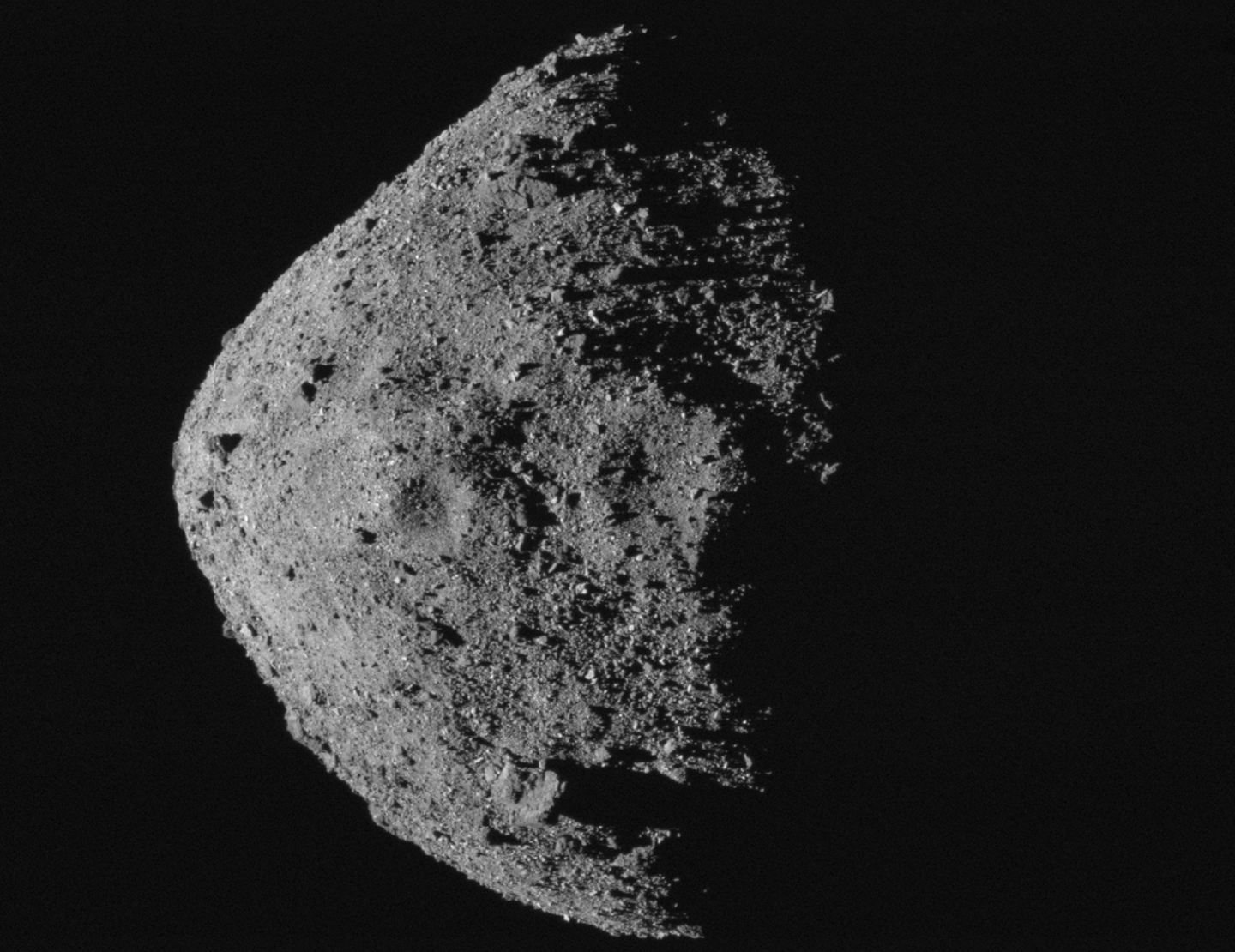 OSIRIS-REx touched down on Bennu in October 2020. NASA/Goddard/University of Arizona
SHARE

Dante Lauretta didn’t expect the surface of the asteroid to be, as he puts it, “fluffy.”

As NASA’s OSIRIS-REx spacecraft descended toward asteroid Bennu to grab a sample of its surface materials, mission principal investigator Lauretta and his team knew the process would leave a mark–both on planetary science and on the boulder-filled surface of the rock itself. For its first-ever mission to retrieve a sample from an asteroid, the space agency selected a target that holds leftover, unchanged material from when the solar system formed..

“We had thought we were going to dig, at most, a little 30-centimeter pit,” says Lauretta, who is also a regents professor at the University of Arizona’s Lunar and Planetary Laboratory. Instead, he says, the material on the surface of Bennu was so loose, “we blew a hole eight meters wide on the surface.” (That’s a crater stretching more than 20 feet across.)

After examining that October 2020 touch-down in detail, planetary scientists determined that the material on the surface of Bennu must be fairly loosely packed, kind of like a dust bunny, Lauretta says. The details are described in a pair of papers published this week in the journals Science and Science Advances.

[Related on PopSci+: In its visit to Psyche, NASA hopes to glimpse the center of the Earth]

This information will be of great importance next year, when OSIRIS-REx delivers a sample of Bennu back to Earth for scientists around the world to study more closely. The goal for the sample-return mission is to shed light on the origins of our corner of the solar system, perhaps even revealing the chemistry that led to the evolution of life on Earth. The asteroid’s contents are particularly unique because they never underwent the same property-changing processes as rocks from planets like Mars.

“Any geologist worth their salt would say, ‘you can’t really understand a rock until you know where it came from.’ Where was the host rock? What was the surrounding environment?” Lauretta explains. “That’s exactly what OSIRIS-REx has done with our sample site.”

And that means figuring out just how “fluffy” the surface of Bennu might be. The team behind the mission determined the bulk density of Bennu’s surface material (the layer on rocky orbiting bodies called “regolith”) using two different approaches. Lauretta and his collaborators analyzed images taken of the sampling site before and after the spacecraft touched down, the results of which are described in the Science paper. Meanwhile, Kevin Walsh, the lead researcher for the Regolith Development Working Group on the mission and a scientist at the Southwest Research Institute, analyzed the force that the asteroid exerted against the car-sized spacecraft—in other words, just how soft of a landing did OSIRIS-REx experience. Those results are described in the Science Advances paper.

[Related: NASA is winding up to punch an asteroid]

Another metric that the scientists looked at was the cohesion of Bennu’s regolith—how strongly different particles stick together, like clumps of flour or cocoa powder, Walsh explains. His analysis revealed “there was essentially no cohesive bonding of the surface [material].”

When OSIRIS-REx landed on Bennu, the spacecraft was performing a maneuver new to NASA: It briefly kissed the asteroid with a robotic arm, called the “Touch-and-Go Sample Acquisition Mechanism” (TAGSAM), blasted a small amount of nitrogen gas at the surface material to stir it up, and then sucked some dust, grains, and pebbles into a sample collection vessel to be returned to Earth.

“As soon as the gas released, there was stuff everywhere,” Walsh says, describing watching video taken of the touchdown. “It was like a hurricane,” he recalls, with loose grains and rock fragments billowing up around the TAGSAM arm.

The descent itself proved to be challenging, given that the regolith wasn’t dense enough to push back on the landing spacecraft. “If we hadn’t fired the thrusters to start backing away from the asteroid, I think we would have gone all the way in and disappeared, like quicksand,” Lauretta says.

OSIRIS-REx discovered water locked in the clays on Bennu, so Lauretta thinks it’s possible that the asteroid’s boulders themselves are porous and not fixed together. Think of it like a day-old drip castle made from dried-out sand at the beach. If disrupted by a small force (human feet or the wind), it could easily collapse into a loose pile of sediment.

Once the samples return to Earth in September 2023, scientists will get a chance to test why Bennu’s regolith is so loose—and then some. The material will go through a “whole battery of tests,” Lauretta says; it will be studied in labs across four different continents for mineralogy and chemistry, different isotopes to determine the asteroid’s age, and organic molecules and volatiles like water that could shed life on how Earth became habitable. Perhaps an asteroid like Bennu delivered water to our planet at a critical moment in its development.

The sample from Bennu won’t be the first space rock to be studied in such fine detail. Meteorites that have broken off of other planetary bodies and hurtled to Earth’s surface have been the subject of scientific scrutiny for decades. But those rocks are contaminated and possibly even altered by our planet’s atmosphere, which makes it tough to pinpoint where they came from. “They’re random samples from space with no context,” Lauretta says.

Pristine samples have to be obtained directly from their source and carefully protected on their trip through Earth’s atmosphere. While the OSIRIS-REx mission will be NASA’s first time bringing rocks back from an asteroid, the Japanese Aerospace Exploration Agency (JAXA) recently conducted a similar mission, Hayabusa2, on the asteroid Ryugu. A previous JAXA probe, Hayabusa, targeted Itokawa, a stonier asteroid. When the samples returned in 2010, the team thought it had failed to return any material. But after opening the collector, they found a few rocky particles. Ultimately, all three missions will provide crucial data for a model of what the early solar system might have looked like.

OSIRIS-REx also has a second destination after Bennu. When the spacecraft returns to Earth, it will drop the sample return capsule to a site in the Utah desert via parachute. The rest of the probe will continue on an extended mission called OSIRIS-APEX to orbit another near-Earth asteroid, Apophis.

OSIRIS-APEX won’t collect any samples from the space rock, but will study the asteroid for 18 months from orbit. It will also perform a maneuver similar to the sample-return one, where it will get close to Apophis’s surface and fire its thrusters to expose what’s directly underneath. That process could reveal that “fluffy” surfaces like Bennu’s are more of a rule than an exception.