Asteroids deal with breakups better than we thought

There go our hopes of nuking an apocalyptic asteroid. 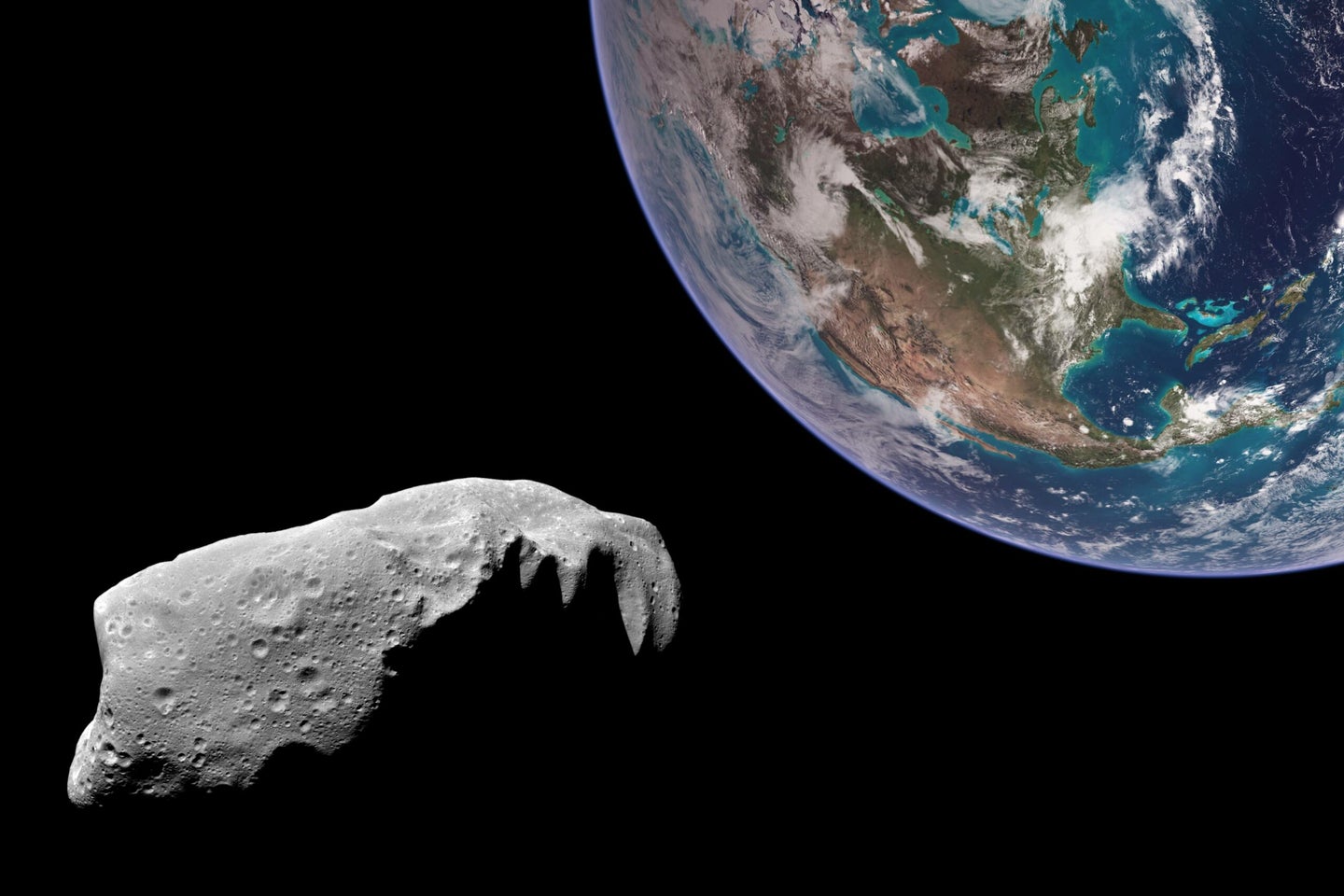 Bruce Willis can't save us, but we kind of already knew that. DepositPhotos
SHARE

If scientists ever discover a giant asteroid heading toward Earth, someone somewhere is going to remember the good times they had watching Armageddon and suggest we just blow it up. And while there are many, many reasons why this is utterly ludicrous, we now have one more reason to throw that strategy into the garbage bin. In findings published in the new issue of Icarus, a group of researchers found that city-sized asteroids may be much tougher than we initially thought, putting the kibosh on the notion of turning such a rock into a pile of harmless rubble.

Not all asteroids are created equal. According to KT Ramesh, a materials scientist at Johns Hopkins University and the lead author of the new study, while gravity does a good job of modeling large celestial objects into hardy spheres, things are much more eccentric at smaller sizes. Gravity is not necessarily strong enough to mold asteroid-sized things out into spheres, so they tend to be different shapes and sizes. There are few cases that encapsulate how strange this gets better than the former-bowling-pin-former-snowman-now-double-pancake-shaped object called 2014 MU69.

If a good chunk of larger asteroids are nothing more than fast-moving rubble piles, than that means they should be pretty easy to just blow up if we ever find ourselves staring down a collision—right? But we’ve only had a few chances to really study asteroids through direct observations. We don’t fully understand the internal and surface structures of these billion-year-old rocks, the range of sizes for which “rubble pile” theory is true, and how much energy it would really take to outright destroy an asteroid. So Ramesh and his team decided to do what scientists have become so accustomed to doing in the 21st century: they created a simulation of a 25-kilometer-long asteroid getting hit by a 1-kilometer-long asteroid cruising through space at five kilometers per second.

The computer modeling used to simulate and characterize an asteroid impact isn’t entirely new, but where it does distinguish itself from prior models is in “a new way of describing how rocks fare,” says Ramesh. “This model actually captures the speed of cracks very well, and what the consequences are.” Asteroid cracks can move at several kilometers per second, but there are also limits in how they can move and propagate through the rock, and how they’ll move through the defects in the rock. The new model takes these patterns into account. In addition, the study’s models incorporate a computational technique for simulating solids and fluids that had not been used in planetary science before, called the “material point method.” “It turns out to be a very good way of coupling the effects of impact with the effects of gravity,” Ramesh says.

In the simulated impact, the larger asteroid does not neatly break up as was previously predicted. It’s damaged, sure, but the cracks don’t propagate as fiercely as one might think, and gravity is able to hold together the various pieces pretty well.

“They don’t break the way we thought,” says Ramesh. “Now we know it takes significant time for this to happen. And the end result is that these bodies [after being impacted] could be significantly damaged, but not broken up.”

Don’t get all morose about the dark fate of the world just yet. Simulations provide estimations, not predictions. “We just don’t have enough information about what most asteroids are made of, what their current structures are, how the densities work,” says Ramesh. “We really need more data.” Current missions like Hayabusa-2 and OSIRIS-REx will shed more light on asteroid composition, but we’ll need more missions like NASA’s Double Asteroid Redirection Test (DART) that can better study in the internal structure of these rocks before we truly understand how to assess an asteroid threat—and what we could do to protect ourselves.

And fundamentally, trying to destroy the asteroid is not a particularly wise move. “You certainly don’t want to try what the movies do and blow these things up,” says Ramesh. “That’s not going to help very much.” Trying to destroy an asteroid might simply break it up into multiple pieces that are each hazardous to the planet. “What you really want to do is move the asteroid out of the way.” Deflection is the name of the game.

Mark Boslough, a former scientist at Sandia National Laboratories and the chair of the Asteroid Day Expert Panel, finds the new study’s asteroid models to be more robust and sophisticated than what’s come before, and thinks the suggestion that many asteroids aren’t just rubble piles but have a more monolithic core is “in principle, a testable idea.”

He does caution, however, that the study’s simulation of a single 25-kilometer-long asteroid is not all that realistic when considering practical applications. “We only know of one of those that’s a near-Earth object. So I’m not sure if the study really applies to planetary defense, since it doesn’t really scale down to smaller asteroids.” Former astronaut Ed Lu, a co-founder of the B612 Foundation, notes the “city killer” asteroids that most planetary defense experts are concerned with are roughly 30 to 100 meters in diameter. A city-sized object that’s 25-kilometers long is “extraordinarily uncommon.”

On the assumption that the results do scale down to smaller asteroids, however, Boslough actually thinks the findings are good news. “If we make the discovery far enough in advance [of an asteroid] to actually implement a deflection, that means we could actually hit it hard enough to make it miss the Earth without breaking it up.”

While the implications to planetary defense are worth considering, Ramesh thinks the findings are probably more relevant to future robotic and human exploration of the asteroids themselves. “Think of asteroid mining as an example,” he says. “You need the ability to take materials from the asteroids, which raises questions of what you’ll need to know about the asteroid surface and structure to go about that.”

That’s a much more realistic way of contextualizing the results. None of the strategies we have to save ourselves from an extinction-level asteroid are developed beyond any kind of theoretical sci-fi phase. There’s no magical space gun or gravity tractor (yet) to push the threat out of the way. The best we’re going to hope for is that our ungodly array of nuclear missiles might—might—just nudge an asteroid over a bit so that it misses us, completely or at least in bulk. Really, we may as well just hope we all don’t die in the aftermath.

The only immediate goal for NASA’s Planetary Defense Coordination Office right now is to identify and track as many threatening near-Earth objects as it can. And then, possibly, we can decide how to actually respond to an object hurtling toward us.

“The most important thing is to actually find these objects,” says Boslough. “If we don’t find them, there’s nothing we can do about them.”