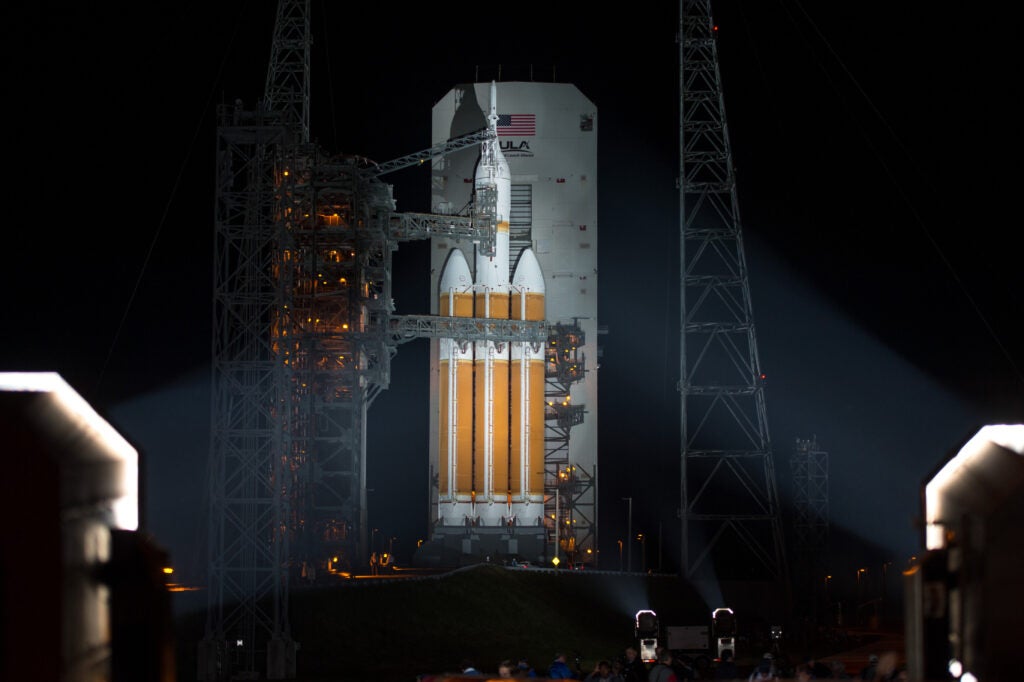 Orion On The Launchpad

A United Launch Alliance Delta IV Heavy rocket with NASA’s Orion spacecraft mounted atop is seen after the Mobile Service Tower was finished rolling back early on Thursday, Dec. 4, 2014, at Cape Canaveral Air Force Station’s Space Launch Complex 37, Florida. Orion is scheduled to make its first flight test on Dec. 4 with a morning launch atop the Delta IV Heavy. The spacecraft will orbit Earth twice, reaching an altitude of approximately 3,600 miles above Earth before landing in the Pacific Ocean. No one will be aboard Orion for this flight test, but the spacecraft is designed to allow us to journey to destinations never before visited by humans, including an asteroid and Mars. Photo credit: (NASA/Bill Ingalls)

Update 9:35 a.m. And just like that, the launch has been scrubbed for today. NASA will try again in 24 hours. That’s the way rocket science goes sometimes. Check PopSci.com tomorrow for live coverage of the next launch attempt!

Update 9:00 a.m. After numerous wind delays, a poorly placed boat, and two valves that failed to cooperate, NASA has less than an hour to get their first test flight of the Orion crew capsule off the ground.

Originally scheduled for 7:05 a.m. EST, the launch appeared to be going smoothly up until a troublesome boat within range of the launchpad put the flight on hold. Fortunately, NASA had a more than two-and-a-half hour launch window, lasting until 9:44 a.m. EST. But numerous wind delays placed the flight on hold a couple times following the original delay.

Once the winds cleared, the Delta IV rocket carrying the Orion experienced a technical issue: A fill-and-drain valve on one of its boosters failed to close. To remedy the issue, NASA has been cycling the valves on three core boosters see if that solves the problem. That’s basically a more sophisticated way of saying NASA is “turning them on and off” to see if that does the trick.

Meanwhile, we’ll wait to see if Orion goes to space today. Only 30 minutes left in this launch window…

After a bit of a hiatus from launching crew vehicles into space, NASA is finally getting back to doing what it does best.

On Thursday, December 4, the space agency will conduct the first test flight of its Orion capsule, a vehicle designed to carry a crew of up to four people deeper into space than ever before. While this particular test flight will be unmanned, the launch will help NASA engineers get a better understanding of how Orion’s systems behave in the extreme temperatures and high radiation environments space has to offer.

For this test, the Orion will lift off from the Cape Canaveral Air Force Station aboard a Delta IV Heavy rocket, which will take the capsule into Earth’s orbit. Once there, the upper stage of the rocket – containing the Orion – will separate from the rest of the Delta IV and continue on a full rotation around the Earth. 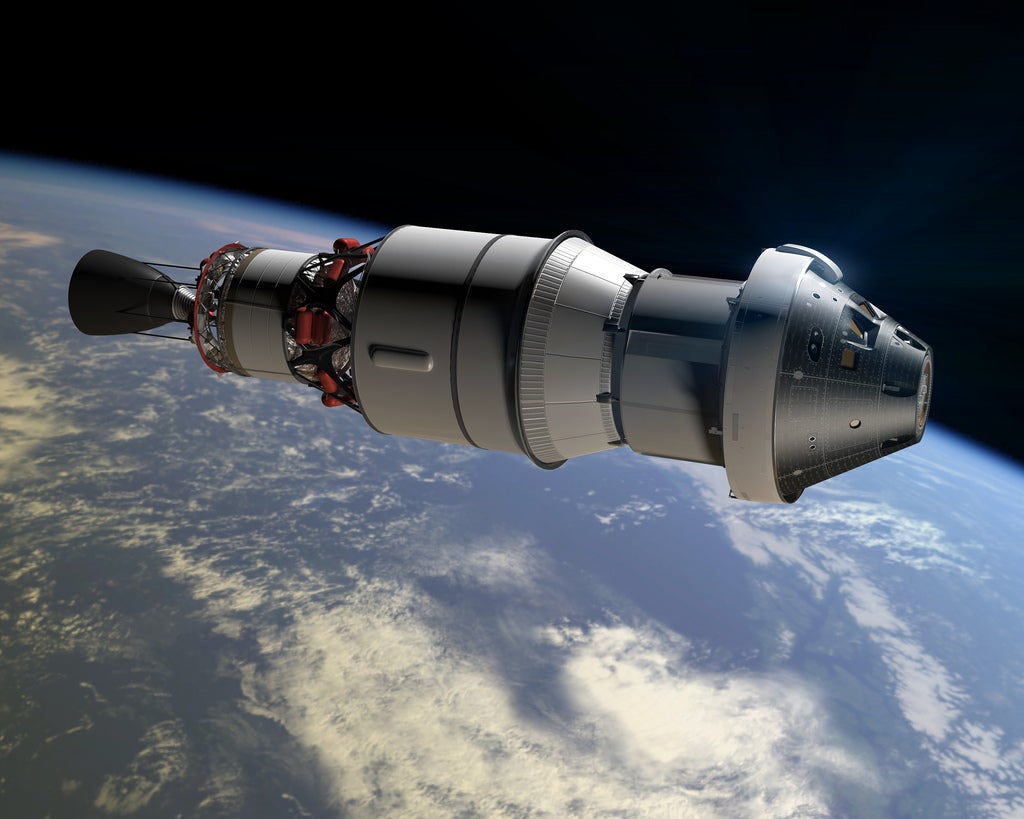 Then the fun part happens: The upper stage fires its rocket, taking the Orion 3,600 miles above Earth’s surface; that’s about 15 times farther than the International Space Station. The trip will take the Orion through the Van Allen radiation belts, doughnut-shaped areas around the planet where charged particles from the Sun have been trapped by Earth’s magnetic field. This will ultimately let NASA know how the capsule’s protective shielding holds up, to know whether it’s safe for people to ride on board. An array of 1,200 sensors onboard the spacecraft will gauge how well the capsule can handle these conditions.

The whole test flight is supposed to last just over four hours. Then, on its way back down to Earth, the Orion will separate from the upper stage of the rocket, reentering the planet’s atmosphere at a whopping 20,000 mph. If all goes well, the capsule will deploy a series of parachutes and splashdown in the Pacific Ocean. If you’re curious about all the tiny details of the test flight, you can read NASA’s press kit or watch the agency’s Michael Bay-inspired explanation video titled “Orion: Trial By Fire.”

As of now, the launch is planned for 7:05 a.m. Thursday morning, just after sunrise. Yesterday, NASA noted that projected weather conditions aren’t exactly ideal for a rocket launch, as low clouds and sporadic showers may move in from the Atlantic. So as of now, the launch is “60 percent ‘Go’.” If the weather clears up, it’s going to make for one hell of a sight. You can watch the test flight courtesy of NASA TV’s livestream.

Built by Lockheed Martin, the Orion vehicle was originally designed for NASA’s now-defunct Constellation program, a human spaceflight program that was meant to take humans back to the Moon. When Constellation was cancelled, the Orion capsule was repurposed to launch on the Space Launch System (SLS), a giant rocket currently being built at NASA’s Michoud Assembly Facility in New Orleans. The ultimate goal for the SLS/Orion pair? Send astronauts to an asteroid and the planetary Holy Grail: Mars.

But aspiring Mars astronauts are going to have to be patient. The first piloted mission for Orion is planned for 2021, a full seven years away. 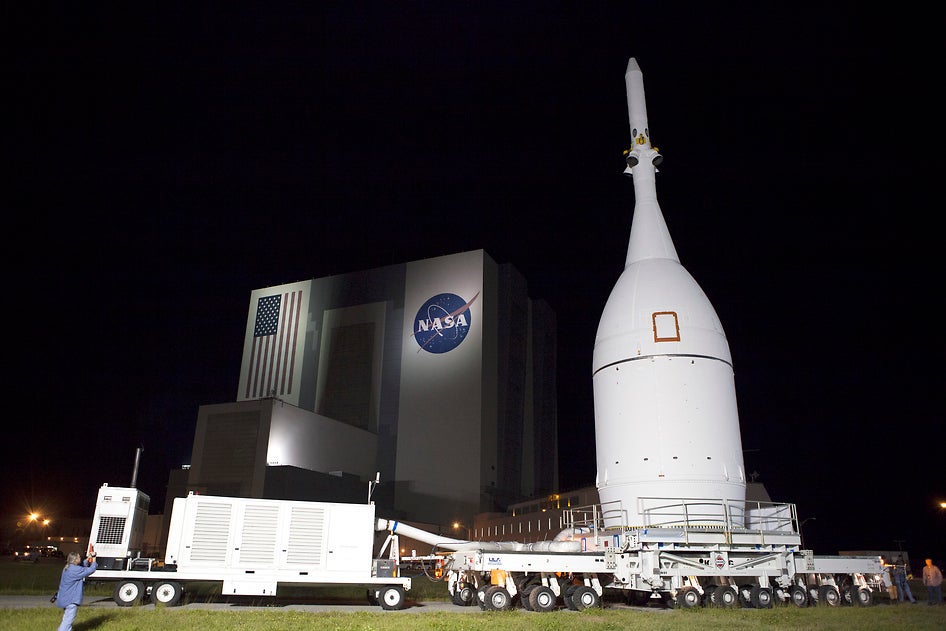