Why a Japanese spacecraft is firing a bullet into an asteroid

And that’s actually not the craziest thing in store for this mission. 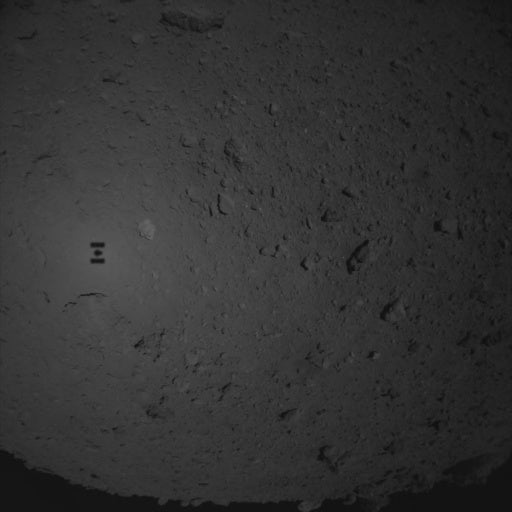 About 180 million miles from Earth lies a tiny asteroid called Ryugu, with a diameter of a little less than 1 kilometer, orbiting the sun about once every 16 months. If everything goes as planned, we’ll be firing a bullet straight into the rock today—all in the name of scientific study. JAXA
SHARE

About 180 million miles from Earth lies a tiny asteroid called Ryugu, with a diameter of roughly 0.6 miles, orbiting the sun once every 16 or so months. If everything goes as planned, we’ll be firing a bullet straight into the rock today—all in the name of scientific study.

Scientists have been preparing for this for nearly a decade now. In 2014, Japan’s space agency, JAXA, launched Hayabusa-2, a robotic spacecraft designed to study Ryugu up close and help us learn more about the structure and composition of asteroids in the solar system. The spacecraft arrived at Ryugu in June, keeping pace with the asteroid’s orbit around the sun.

Hayabusa-2 is, without a doubt, one of the wildest missions space scientists and engineers have ever attempted. The spacecraft is armed with multiple instruments collecting images and data across a host of different spectrums. A key goal is to deploy four different rovers, three of which were sent to the surface last fall and provided our first glimpse of a very vibrant surface.

And then there are the sample returns, which take the audacity of the mission to a whole other level. On Thursday, the spacecraft will descend towards the surface of Ryugu and touch down with a sampling horn. Once the spacecraft makes contact, it will literally fire a 5-gram metallic bullet into the rock, at a speed of over 670 miles per hour. The horn’s catcher will collect as much of the ejected, grainy debris as it can (the microgravity environment of the asteroid will help make this more feasible than you might think). And then Hayabusa-2 will perform this shot yet again and collect more material. The goal is to gather actual material of the asteroid itself, and bring it back to Earth for more detailed study in the lab.

And that’s not all: A second sample return attempt will take place later in the spring, which involves using explosives to create a six-foot-long crater in the surface of the Ryugu and collect subsurface rock to bring back home. Yowza.

Why go to such explosive lengths? Although some people hope an analysis of this rock can tell us more about prospecting asteroids for resources in the distant future, most scientists are focused on using the Ryugu sample to learn about the origins of the solar system. Along with OSIRIS-REx (another mission focused on the study and sample return of a near-Earth asteroid), Hayabusa-2 has the potential to finally provide a better glimpse into the early days of our solar system, and how this may have laid the groundwork for the beginnings of life on Earth.

Most of what we know right now about the formation of the solar system comes from meteorites that have impacted the Earth over its 4.5 billion-year lifespan. We’ve learned a ton from rigorous analyses of these materials, but our understanding is still limited to things like how contaminated these rocks get as they pass through the atmosphere and hit the dirt, or how they fracture and turn quickly into dust. Orbiter missions that study asteroids in space through remote sensing techniques add new insights, but given pictures can’t be subject to physical or chemical studies, imaging can only tell us so much about what these rocks are made of or how they formed. That’s why sampling, however audacious, holds so much promise.

“What the sample return really tells us, is that we know where the asteroid comes from, we have pictures of it, and we have this sample that has not been contaminated by other factors,” says Michael Nolan, head of the OSIRIS-REx science team at the University of Arizona. And there’s nothing quite like an intact, pristine piece of a rock that has been virtually untouched for billions of years.

JAXA’s initial Hayabusa mission was the first successful sample return from a near-Earth asteroid, but can only be considered a partial success, since those samples were really more like particles, collected from an asteroid composed of a volcanic kind of rock, during a mission sagged by obstacle after obstacle. Nevertheless, the tiny specks of dust returned from that mission helped us to learn about the timeline and history of some rocks in the solar system, particularly ones that reside outside the asteroid belt. H2 will look to take things a step further. Nolan explains that Ryugu is a more primitive rock than ones we’ve studied before, rich in carbon and replete with a sort of gemstone facade. This is distinct, too, from Bennu, the asteroid at the center of the OSIRIS-REx mission that will also attempt an asteroid sample return. “We’re going to get two very different pieces of solar system history,” says Nolan.

These samples could help us glean a ton of insights when it comes to how asteroids could be used as a vessel for transporting organic and inorganic materials alike across different worlds. In other words, we might learn more about whether asteroid impacts seeded the early Earth with the types of ingredients necessary for life to later evolve.

But first, we have to collect those samples. Hayabusa-2 will finish up its work through the year and depart Ryugu in December, returning back to Earth and delivering its samples later in 2020. Let’s hope today’s attempt doesn’t end up backfiring (ha, get it?) The operation is set to take place at 6:00 p.m. Eastern Time, and JAXA will broadcast the entire thing live (with an English Translation) from its control room.