A Drill To Tunnel Miles Below The Surface Of Mars

In the California desert, Honeybee Robotics is testing a drill that could search for life on other worlds 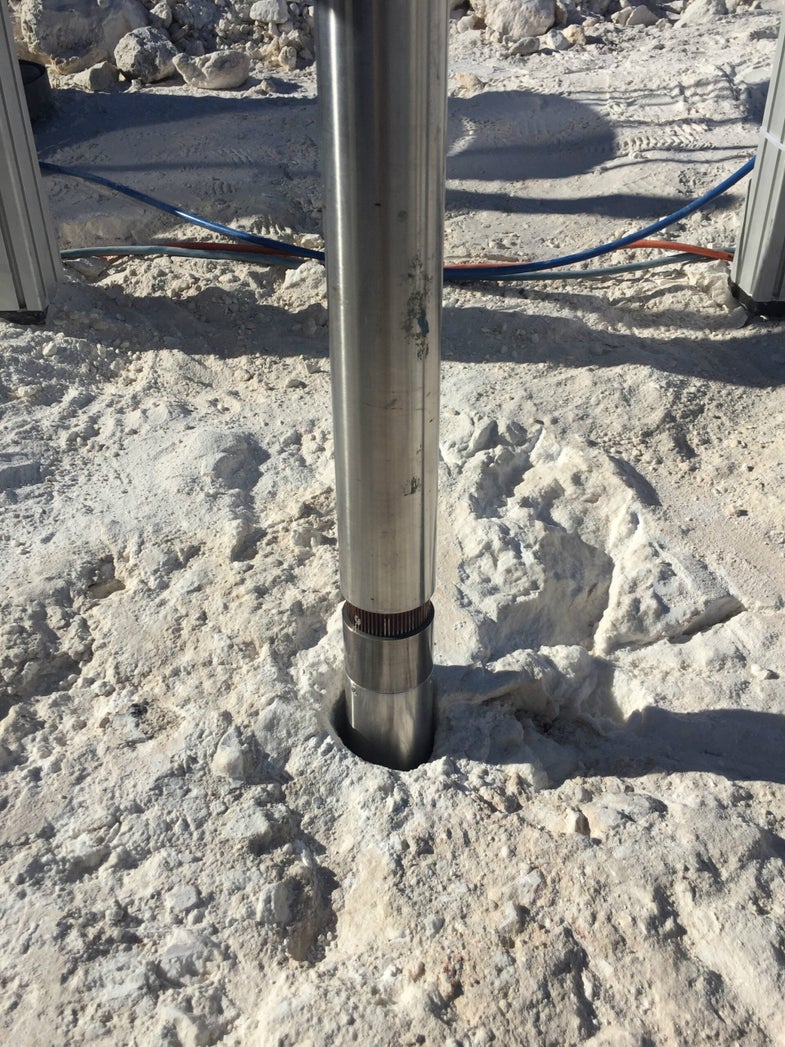 It’s noon in Ocotillo Wells, California. A vast and empty patch of desert between San Diego and the Salton Sea, this part of California might as well be Mars. After just a few minutes, everything is covered with a fine white dust, soft to the touch, like powdered sugar. Kris Zacny, the vice president and director of exploration technology at Honeybee Robotics, grabs his hardhat and vest out of his car and walks over to a U-Haul that is serving as mission control. Today, Zacny and his team will begin testing the Planetary Deep Drill, designed to penetrate miles under the surface of places like Mars and Europa to search for one thing: evidence of life.

The Planetary Deep Drill isn’t an ordinary drill like you might have in your house for hanging photos or building Ikea furniture. To assist in arguably one of the most important searches in human history, the Planetary Deep Drill contains a microscope, camera, and LED and UV lights. The UV light will help identify microbes and minerals that fluoresce, not unlike a black light used to identify organics at a crime scene.

This is the first test of the Planetary Deep Drill in the field. Until now, its mechanical systems have only been tested in the lab. Honeybee Robotics is currently the only organization working on a drill like this. NASA worked on their own design in the past, but now they’re partnering with engineers at Honeybee Robotics to someday get it into space. 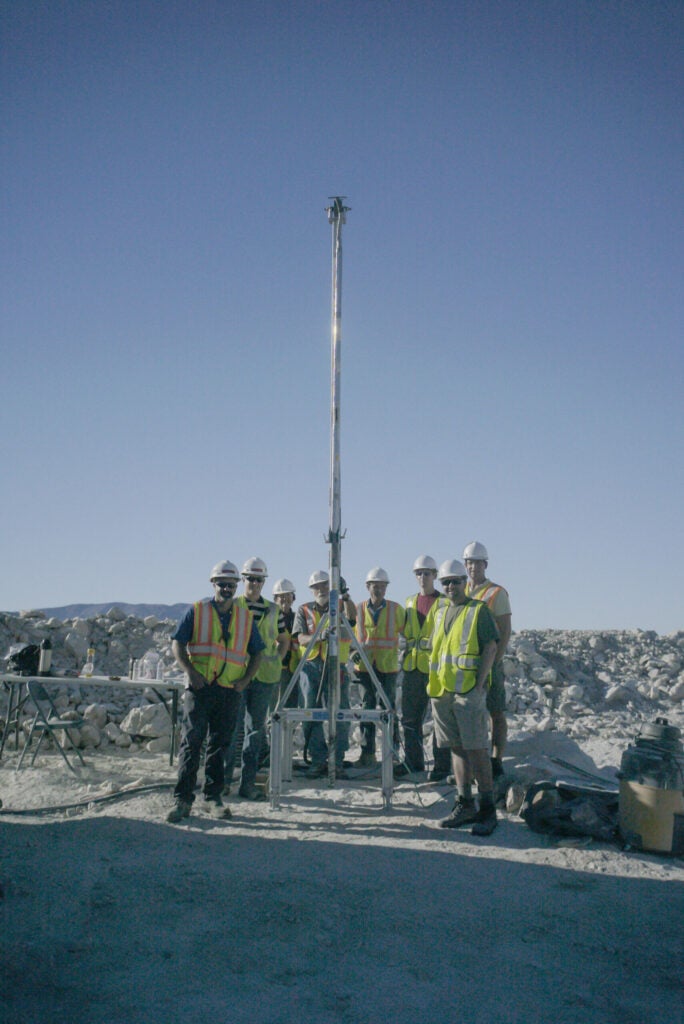 The drill stands about 16 feet tall

The drill is not yet scheduled to launch to another planet, and couldn’t do so for at least a decade. “There’s nothing on the books right now,” Jim Green, the director of planetary science at NASA, tells us, “but it’s almost a no-brainer that we will eventually have to develop something like this.”

The most likely location for the first off-Earth drill site is Mars. We know the poles of Mars have ice, but if anything’s surviving there, it’s most likely to be deep underground, away from the radiation that constantly bombards Mars’ surface. We know much less about Europa, but we do know that it’s covered in a thick ice crust that can be as deep as eleven miles in some places. The real mystery of Europa lies below the surface in a massive saltwater ocean that contains more water than all of Earth’s water sources combined–a potential hotbed for microbial life.

A crew of five has a large television screen hooked up with data loading in real time as they get ready for their research to begin. The U-Haul overlooks a gypsum quarry, a mine owned and operated by a private company called USG (United States Gypsum) that has offered its prized rocks to Honeybee for the experiment. There are no people, no animals, and a few sparse shrubs. The crew have stocked mission control with plenty of snacks and water in preparation for a few long weeks of drilling.

Zacny and Gale Paulsen, deputy director of Honeybee Robotics, have driven down from their offices in Pasadena and despite the three-hour drive, are unabashedly excited to see their project break ground.

One of the project engineers grabs a lever at the back of the drill and manually lowers the tungsten carbide drill bit to the surface, signaling to the U-Haul mission control to turn on the motors. 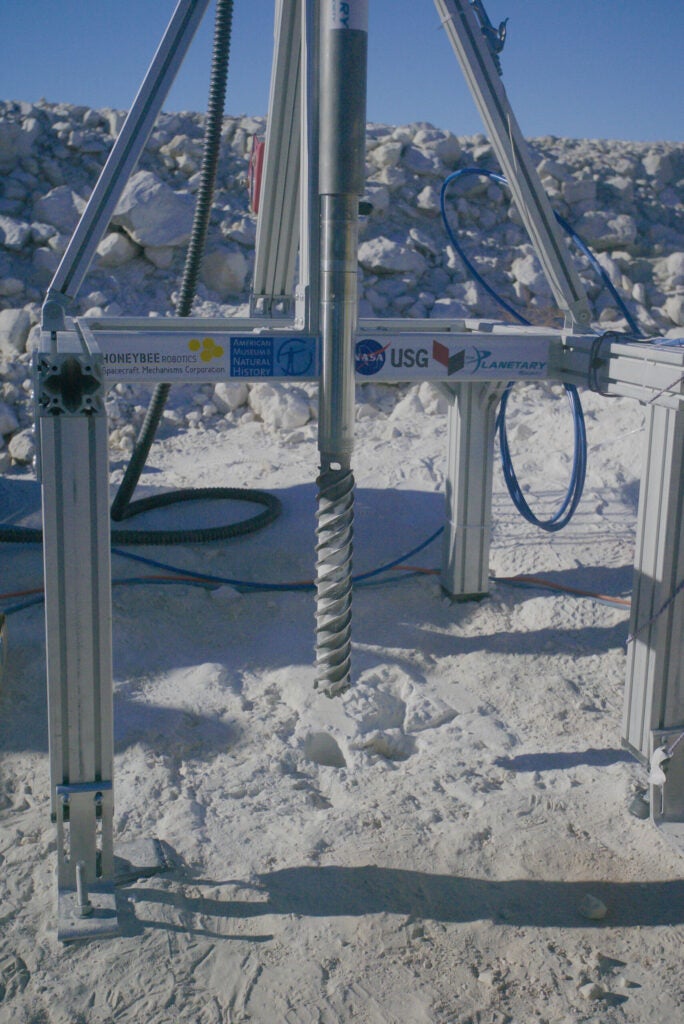 The specially designed drill bit is meant to cut through extremely hard layers of rock and ice. This gypsum quarry is not anywhere near cold (it was 80 degrees when we visited) and definitely not icy like the poles of Mars. But this particular location just happens to be the thickest gypsum deposit in the United States. Gypsum is a brittle rock, but when layered is very strong and serves as a close analog to ice that has been evaporated and re-condensed on planetary surfaces for millions of years. While you might be able to scrape the surface with your fingernail, drilling kilometers down requires a tool strong enough to break through the ice and rock.

On the base of the 16-foot-tall drill, stickers representing the partners are proudly displayed: Honeybee Robotics, The American Museum of Natural History, USG, NASA, and The Planetary Society. All of the drill’s supporters, Zacny says, “have the same goal: exploration.”

Developing something to explore another planet requires ingenuity. The team had to be very creative in designing a drill to work flawlessly billions of miles from any Home Depots or humans. The Planetary Deep Drill will have to function completely autonomously.

“It’s almost a no-brainer that we will eventually have to develop something like this.”

“Our biggest challenge, aside from autonomy, is geological uncertainty,” explains Zacny. “The water on Mars and Europa isn’t clean; it’s essentially a salty brine which can change freezing phases from -50C to -70C. Then there could be embedded rock, layers of rock or layers of fallen meteorites, and the drill has to be able to go through any of those variations.”

The drill also needs to fit onto a spacecraft.

Though the company aims for the drill to bore through hundreds of feet of the Martian underground (and in the case of Europa, up to 5 miles of ice), the drill itself is only 13 feet high with a bit at the very tip. To reduce the bulk of the cargo that would need to launch with the drill, Honeybee designed a cable to lower and raise the drill into the bore hole. The cable functions like fishing line that can roll into a small container and release or retract as needed. Paulsen points to the large pile of cable and says, “we are only limited by the amount of cable we can bring on board, because it can lower the drill as far as it needs to go.”

The drill falls into the small borehole. Mission control has fired up the motors and the field test has begun.

The sound of the tungsten carbide drill bit is surprisingly quiet as it grinds against the 6.3-million-year-old rock; only a faint clicking sound can be heard despite it only being centimeters below the surface. The team watches attentively, listening to the muffled sound of grinding gypsum and periodically glancing at the large TV screen displaying the data: drill depth, temperature, revolutions per minute. After 30 minutes, the first session is complete. They’ve drilled down 20 centimeters, and their goal is at least 10 feet by the end of the day.

Zacny and Paulsen walk over to the drill and watch as the team raises the winch, slowly revealing the drill as it comes out of the borehole. In each crevice of the spiral patterned auger are globs of white ground gypsum. Their engineers grab a brush, a small cardboard box and a Ziploc bag, and start to clean the drill, collecting the gypsum dust to study later at the lab. This is just one example of something the drill will eventually have to do on its own–clean the catchment and get back to work.

There are a lot of other factors to take into account aside from cleaning and taking samples. The drill has to actually work, and there’s one big challenge to think about when planning to drill outside of Earth’s cozy environment: gravity. Mars has one-third of the gravity of Earth. “We don’t have the same thrust on Mars because everything weighs three times less,” Zacny explains. “Normally we would rely on weight to force down the drill bit, but that wasn’t an option for a planetary drill like this.” So instead Paulsen and Zacny designed a drill that would push itself down by pressing on the side of the bore-hole, making the force of gravity, or lack thereof, irrelevant to its function.

The next generation drill that may eventually head to the poles of Mars will likely be half the size of this test drill and will replace the microscope with a UV/Raman spectrometer called SHERLOC (Scanning Habitable Environments with Raman & Luminescence for Organics and Chemicals). This spectrometer has already been approved to fly on board the Mars 2020 rover to conduct a similar mission: detecting biosignatures in the Martian soil. But the rover’s soil samples will come from a much shallower bore hole–2 to 3 inches deep, at the most. Designed by NASA’s Jet Propulsion Laboratory, SHERLOC will be able to take readings as the drill goes deeper below the surface and should confirm whether or not life exists in that region of Mars.

The team gathers around mission control as they begin round two of the test. They will operate the drill like this in 30-minute increments over the next few weeks until they have reached their goal depth of 30 meters (or about 100 feet). “We are doing this to prove that it works, to prove that it can be done,” says Zacny.

After this test in the desert, the Honeybee team will eventually take their drill to a more extreme environment, such as Greenland. There they will have the closest analog to places like the poles of Mars. Testing in well-below freezing temperatures will give them a better idea as to how the electronics might function in the freezing Martian environment. 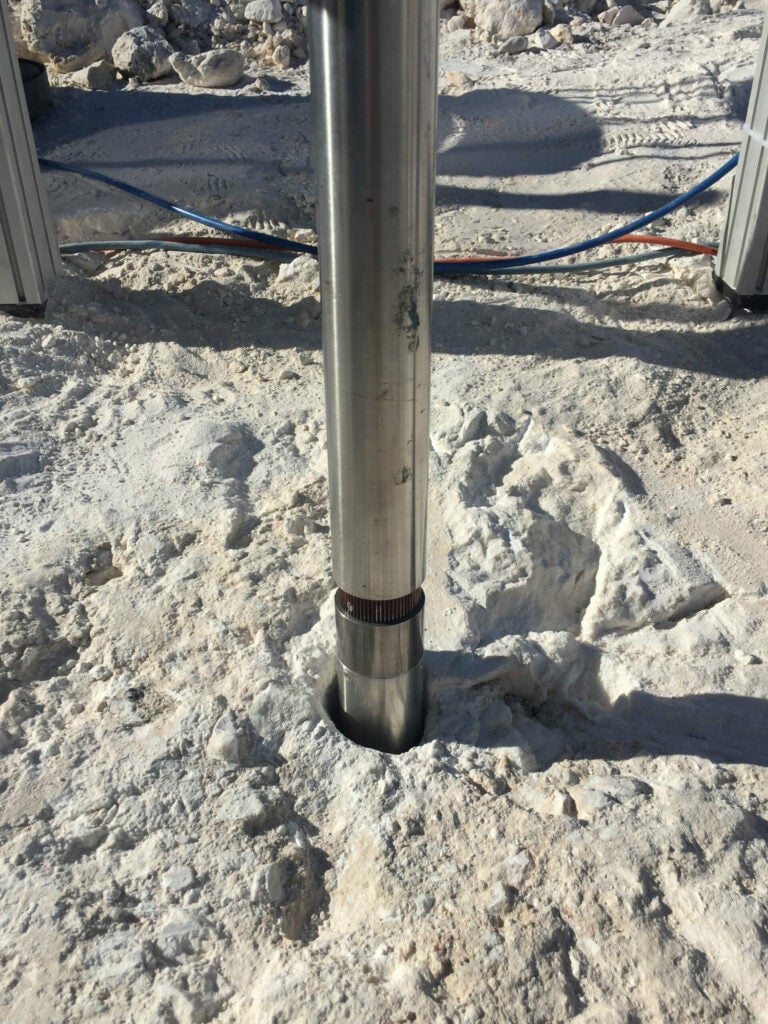 “This is a revolution in planetary exploration,”says Bruce Betts, the Planetary Society’s director of science and technology. “The farthest we’ve drilled autonomously with robots is centimeters, so to be able to do this, to drill down not just meters but tens and hundreds, it would be a revolutionary.”

Jim Green from NASA is also on board for digging deep. “This is an opportunity to see if life exists on Mars,” he says. “When you get into the extremes, life moves into the rocks. We know that there’s more life in the biosphere below our feet than all life in the ocean, and a drill that gets us down many meters will enable us to properly investigate.”

The crew decides to scope out the quarry from a more Martian-like vantage point as the drilling continues well into the day. The sun has lowered in the sky and hovers over a nearby mountain as the iron oxide on the hills pick up the sunlight, giving everything a warm reddish hue. One could fool oneself into thinking this really was Mars.

Today’s test is one of many, but at only 10 feet below ground, Zacny is not shy about hiding his enthusiasm. “I already consider this test a huge success,” he says. “Now we just have to go to Mars!” 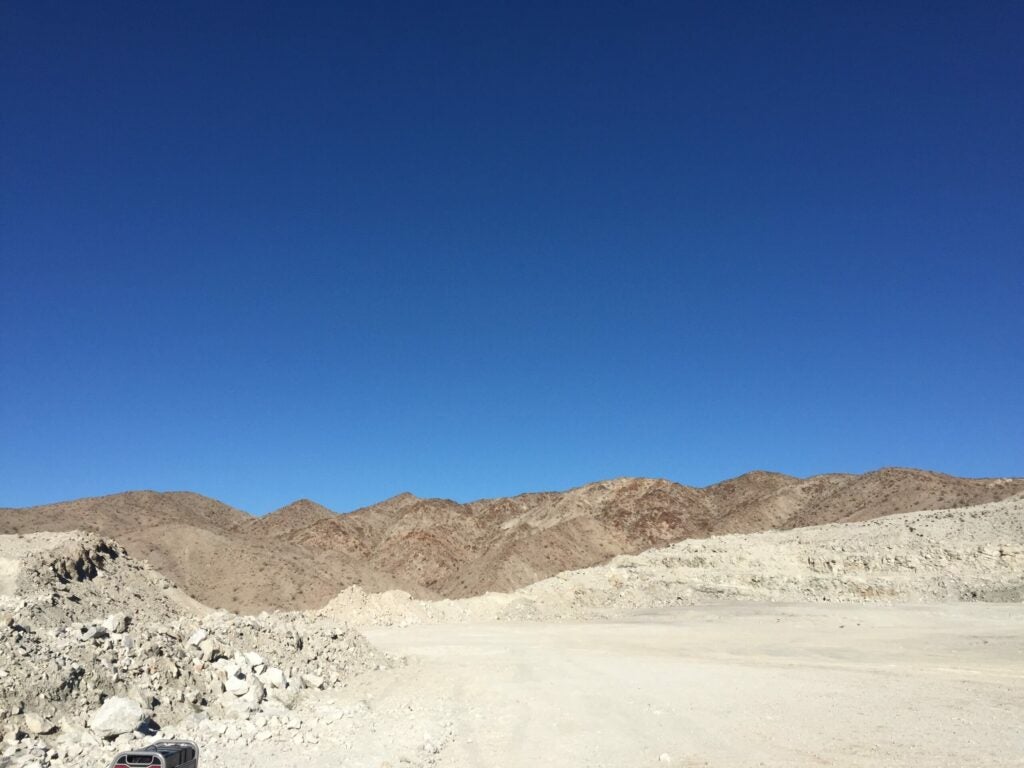