One of the first views of the Martian surface taken by Mariner 4 on its flyby. NASA
SHARE

From the moment NASA introduced its seven Mercury astronauts to the nation at a press conference on April 9, 1959, the manned program dominated more than a decade of the space agency’s activities. The astronauts graced magazine covers and became national heroes as the enraptured (and sometimes cynical) public waited to see if Apollo would successfully land on the Moon by the end of the decade. But behind this highly publicized space race was a program to begin visiting our planetary neighbours, Venus and Mars, which gave rise to the Mariner Mars exploration program.

The Mariner program began in 1960 with a simple goal: develop a small spacecraft, then send different incarnations at frequent intervals to Venus and Mars on the soon-to-be-available Atlas rockets to gather a wealth of data on these two worlds. It was, in some ways, a simpler goal than Ranger or Surveyor, two coincident lunar reconnaissance programs designed to take a close up image of the Moon before impacting its surface and make a soft landing respectively.

Each spacecraft was tailored for its specific mission, but they all shared some similarities. The Mariners used an array of solar panels to power the onboard suite of instruments that included a camera to photograph the surfaces of these nearby worlds. An onboard dish antenna could receive commands and send data back to Earth through the Jet Propulsion Laboratory’s newly established Deep Space Instrumentation Facility, the precursor to the Deep Space Network.

As a safety measure, the Mariner probes were designed to launch in pairs; for each mission, two spacecraft were readied and launched towards the same target on separate rockets. It was a way to increase the odds of success in an era where rockets were wont to explode shortly after liftoff. This dual launch arrangement proved to be a smart move. Mariner 1 launched on the first mission to Venus on July 22, 1962 on an Atlas rocket that started veering off course forcing the range safety officer to destroy it after just 293 seconds of flight. Its twin, Mariner 2, followed a little more than a month later on August 27 and fulfilled a fantastic mission, becoming the first spacecraft to fly by and gather data from Venus.

The next spacecraft pair was aimed at Mars. Mariner 3 launched on November 5, 1964, but was lost when the shroud housing the spacecraft atop the rocket failed to separate. Three weeks later on November 28, Mariner 4 successfully left the Earth. After an eight month cruise, it reached the red planet and made its closest flyby on July 15, 1965. As it sped past the planet on its way into heliocentric orbit, the spacecraft took the first close-up images of the planets’ surface, showing the horizon against the blackness of space and revealing a face marked by Moon-like craters. It was the first indication that Mars was a varied world worth studying.

From this point, the emphasis of the Mariner program shifted to favor Mars over Venus. 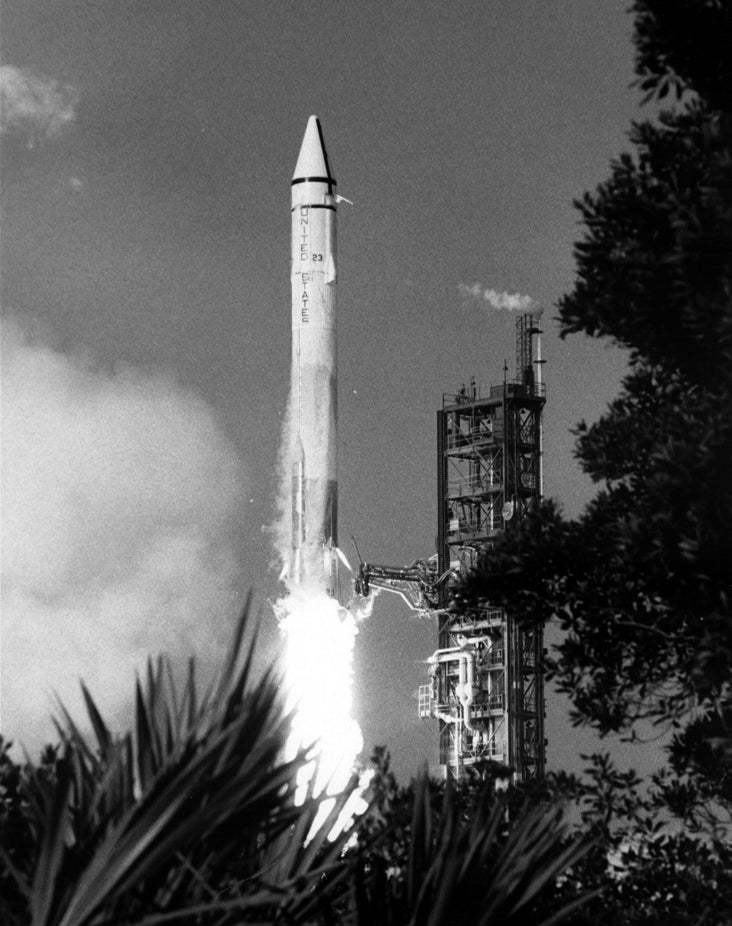 Mariner 5 was repurposed from a backup for Mariner 4 into a standalone Venus mission launched without a mate in June of 1967. The next Mariner pair launched to Mars in early 1969, and, flying just months before Apollo 11, these two probes benefitted from the technological advances primed to facilitate the lunar landings. Most notably, advances in telecommunications systems. In five years, data transfer rates improved sixty-fold for far superior images.

Mariner 6 flew by the Martian equator on July 30, 1969, and Mariner 7 passed the southern hemisphere on August 4. Both flew far closer to the planet than Mariner 4 and returned a total of 201 images between them including the first full globes of Mars along with new detailed images of the surface. These far superior images of Mars raised new questions about the planet and also increased scientists’ desire to pursue a landing mission. To this end, the Mariner 8 and 9 probes were launched with the goal of picking potential sites for the twin Viking landers as part of the Mars 71 project.

Mariner 8 failed at launch, but Mariner 9 did make it to Mars. This spacecraft carried a similar instrument payload to Mariners 6 and 7, but it had a markedly more powerful propulsion system. When it reached Mars on November 14, 1971, it used that system to slow its velocity, becoming the first spacecraft to go into orbit around the planet. After 349 days, Mariner 9 had sent back 7,329 images covering more than 80% of Mars’ surface. The mission revealed river beds, craters, extinct volcanoes, and canyons, including the massive Valles Marineris that dwarfs the Grand Canyon, and showed clear evidence that wind, water erosion, and weather had physically shaped Mars in its past. These results from Mariner 9 ultimately narrowed down the landing site for Vikings 1 and 2, the first two probes that reached the surface in 1976.

As a bookend to Mariner 4 standing as the first wave of exploration, New Horizons will take the first ever close up images of Pluto on July 15, 2015, 50 years and one day after Mariner 4’s first images of Mars. Imaging systems have come a long way in the last half-century, so the first images of Pluto will certainly be clearer than those first images of Mars! I’m helping the New Horizons team, bringing the excitement to the mission to the public, so be sure to follow me on Twitter — @astVintageSpace — for live updates during Pluto’s flyby (but all the news will come from NASA. I can’t tell you anything before the agency does!).

The Martian horizon set against the blackness of space as seen by Mariner 4.

One of the first views of the Martian surface taken by Mariner 4 on its flyby.

A much clearer view of the surface from Mariner 6. 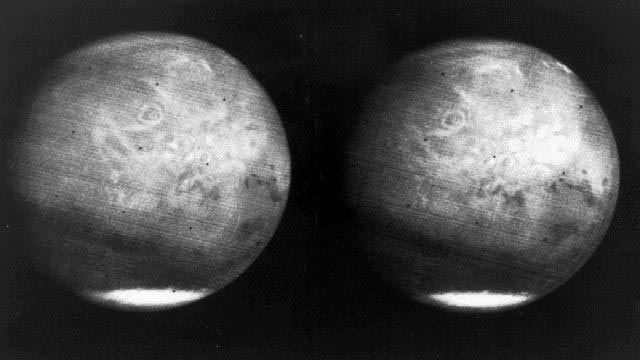 The full globe of Mars as seen from Mariner 7. 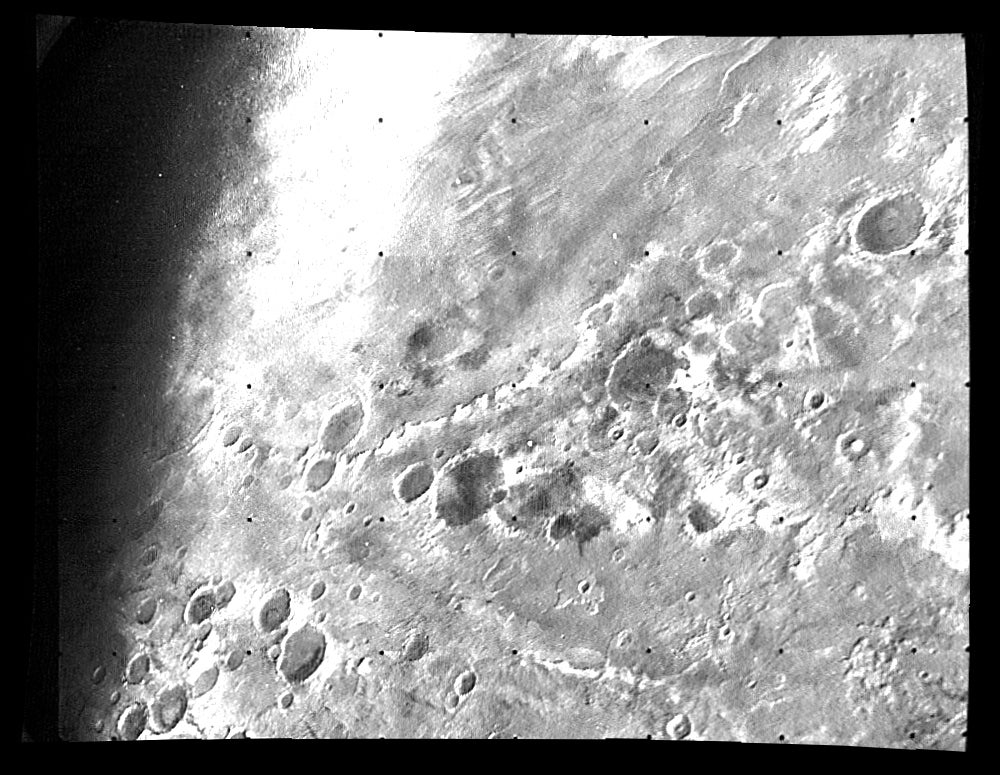 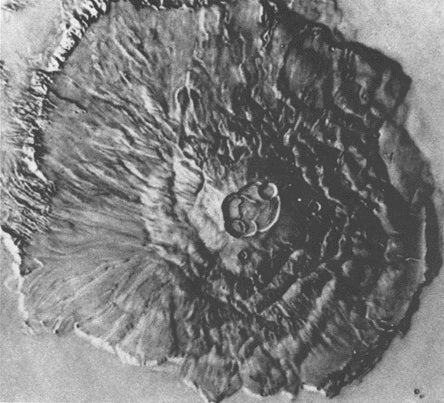 Mariner 9’s view of Olympus Mons, which is about three times as large as Mount Everest. 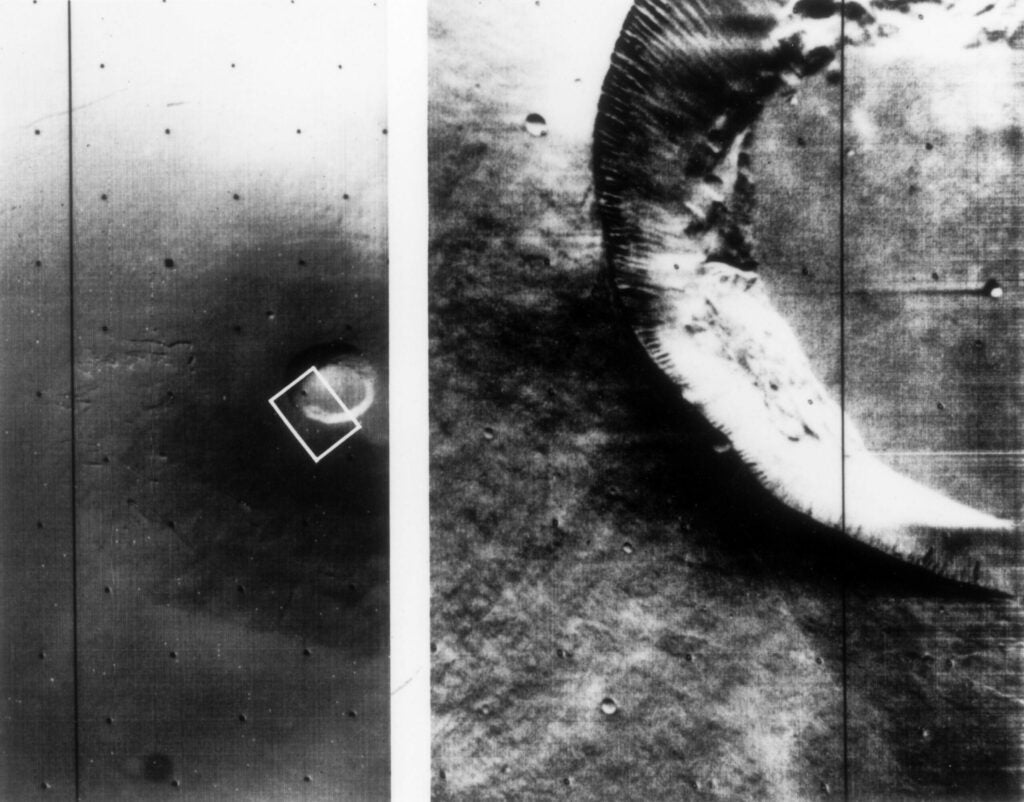 A close-up view Martian shield volcano about 25 miles across at the rim of a crater as seen from Mariner 9. 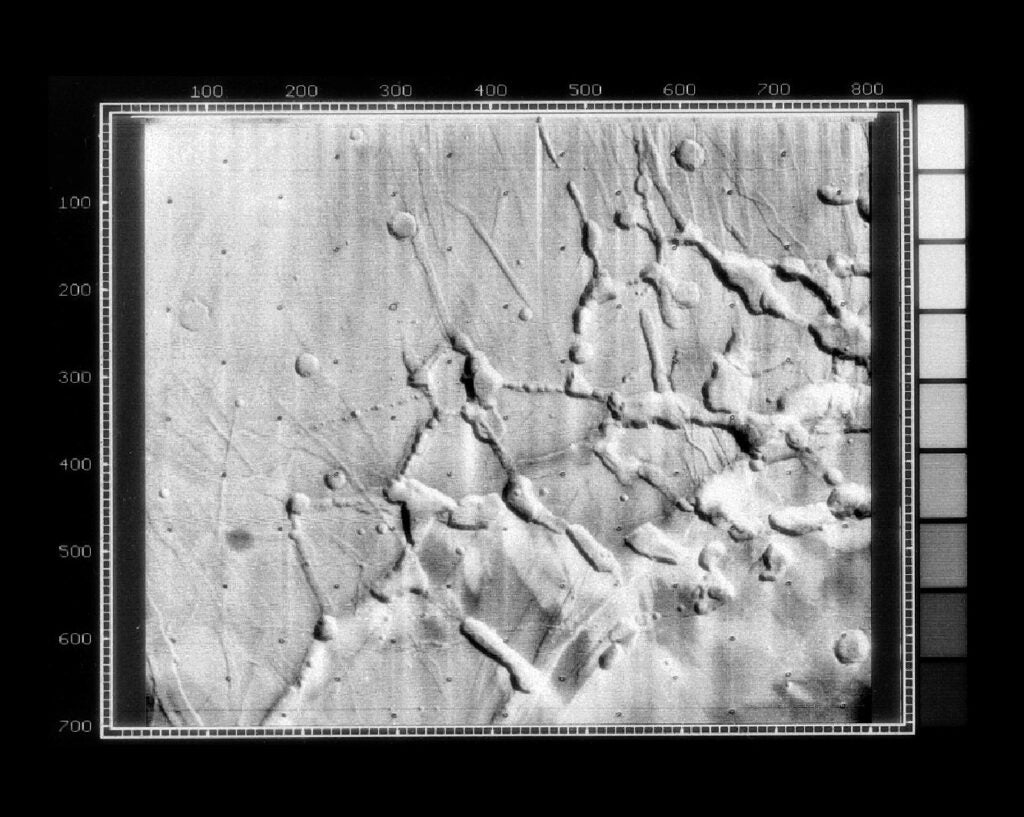 The labyrinth-like features at the western edge of Vallis Marineris on Mars, as seen by Mariner 9.

The first picture returned from the surface of Mars, the day Viking 1 landed in a region called Chryse Planitia on July 20, 1976.
Space
exploration
history
JPL